The World Trade Organization is set to be run by a woman for the first time in its 25-year history after it was announced that the final choice to be its new director-general will be between South Korea’s Yoo Myung-hee and Nigeria’s Ngozi Okonjo-Iweala.

Britain’s former international trade secretary Liam Fox failed to make the final shortlist as the number of candidates was whittled down from five to two.

The protracted battle to secure one of the plum international jobs will be decided early next month, with the winning candidate faced with a number of pressing problems.

Fox, despite support from the US, failed to muster sufficient backing, leaving the choice between a seasoned trade official in Yoo and a candidate in Okonjo-Iweala who says the organisation needs a fresh pair of eyes.

Candidates to be director-general of World Trade Organization

The eight candidates to be the next director-general of the World Trade Organization are:

Amina Mohamed: the Kenyan candidate knows her way round Geneva and is a former chair of the WTO’s general council. Currently cabinet minister for sports heritage and culture, Mohamed was Kenya’s foreign minister between 2013 and 2018. Chances: joint frontrunner.

Jesús Seade Kuri: Mexico’s choice has a long career in trade negotiations stretching back to the days of the General Agreement on Tariffs and Trade, the forerunner to the WTO. More recently, he was involved in the renegotiation of the North American Free Trade Agreement between Mexico, Canada and the US. Chances: Should make the first cut.

Mohammad Maziad al-Tuwaijri: Riyadh’s pick for the job is a former Saudi air force pilot who worked in banking for JP Morgan and HSBC but currently advises the Saudi royal family on international and domestic economic policy. Chances: Will struggle to make the first cut.

Yoo Myung-hee: South Korea’s trade minister is a veteran of trade negotiations and took charge of WTO affairs for her country when it was set up in 1995. More recently, she has been responsible for negotiating free trade agreements, including the one with the UK. Chances: potential dark horse.

Liam Fox: the Brexit-supporting MP was made international trade secretary by Theresa May in 2016 but was ousted by Boris Johnson in his 2019 reshuffle. The former defence secretary twice ran unsuccessfully to be leader of the Conservative party and was chosen as Britain’s nominee in preference to the former EU trade commissioner Peter Mandelson. Chances: slim.

Abdel-Hamid Mamdouh: The ultimate trade insider, Mamdouh’s experience of trade talks stretches back to the mid-1980s when he was the Egyptian negotiator at the Gatt. He later became an official at the WTO and ran the services division. Holder of both Egyptian and Swiss nationality. Chances: outsider.

Ngozi Okonjo-Iweala: Nigeria’s candidate spent 25 years at the World Bank, eventually rising to number two in the Washington-based organisation. Okonjo-Iweala was a strong voice against corruption during her two terms as her country’s finance minister and was also foreign minister. Chances: joint favourite despite no trade background.

Tudor Ulianovschi: The youngest of the WTO hopefuls, at 37, Ulianovschi was a diplomat before briefly becoming Moldova’s foreign minister between 2018 and 2019. He gained experience of how Geneva works during his time as Moldova’s representative at the WTO. Chances: rank outsider. Larry Elliott

The other unsuccessful candidates in the second phase of a race that began with eight hopefuls were one of the original favourites, Kenya’s Amina Mohamed, and Saudi Arabia’s Mohammad Al-Tuwaijri.

Okonjo-Iweala has served two terms as Nigeria’s finance minister and has also been her country’s foreign minister. Having also been the number two at the World Bank, she is running as an outsider and as the candidate to give the WTO fresh political momentum. 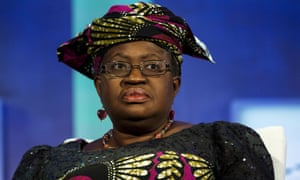 Interviewed by the Guardian last month, she said: “It’s true I am not a WTO insider but that’s a good thing. We need someone who knows trade but brings a fresh pair of eyes.

“There are a lot of people with technical skills at the WTO. There is no shortage of trade skills but the problems are there and they are getting worse. Something else is needed, strong political skills, someone able to engage leaders in a substantive way.”

Yoo has a record in government stretching back 25 years and has worked on a number of bilateral trade deals, including those with the US and the UK.

Covid-19 has had a marked impact on global trade flows, with the WTO expecting a drop of 9.2% this year and only a limited rebound in 2021.

The pandemic comes amid a simmering trade war between the US and China, the failure of the WTO to complete the Doha round of trade liberalisation talks, and the refusal of Washington to allow the appointment of judges to the organisation’s disputes appeals panel, a decision which has impaired its ability to police global trade.

The WTO has in the past decided on its leaders through a consensus of its members. If that proves impossible, a vote will be held.