A 20-YEAR-OLD woman is trapped in the body of a child half her age due to a rare genetic condition that stops her from growing.

Michelle Kish was born was Hallermann-Streiff syndrome, a condition so rare that at the time of her birth there were only 250 known cases worldwide. 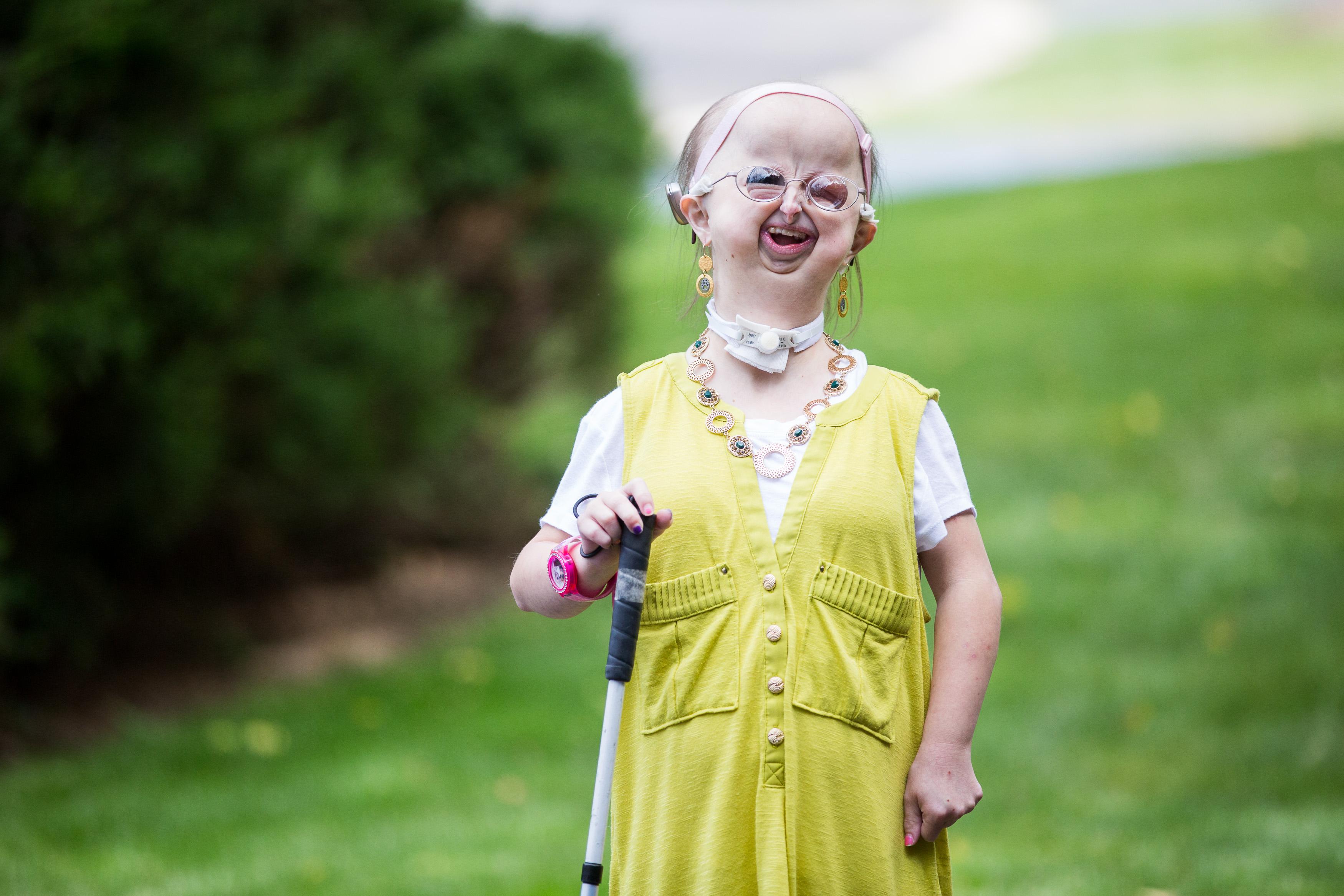 Symptoms of her condition include a distinct round, childlike facial features and a form of dwarfism that means she is only as tall as her sister Sarah's waist.

But determined Michelle refuses to let her disease hold her back and one day dreams of being a paediatric doctor.

Mother Mary, who is also Michelle's carer, said: "When I was pregnant with Michelle everything was normal. 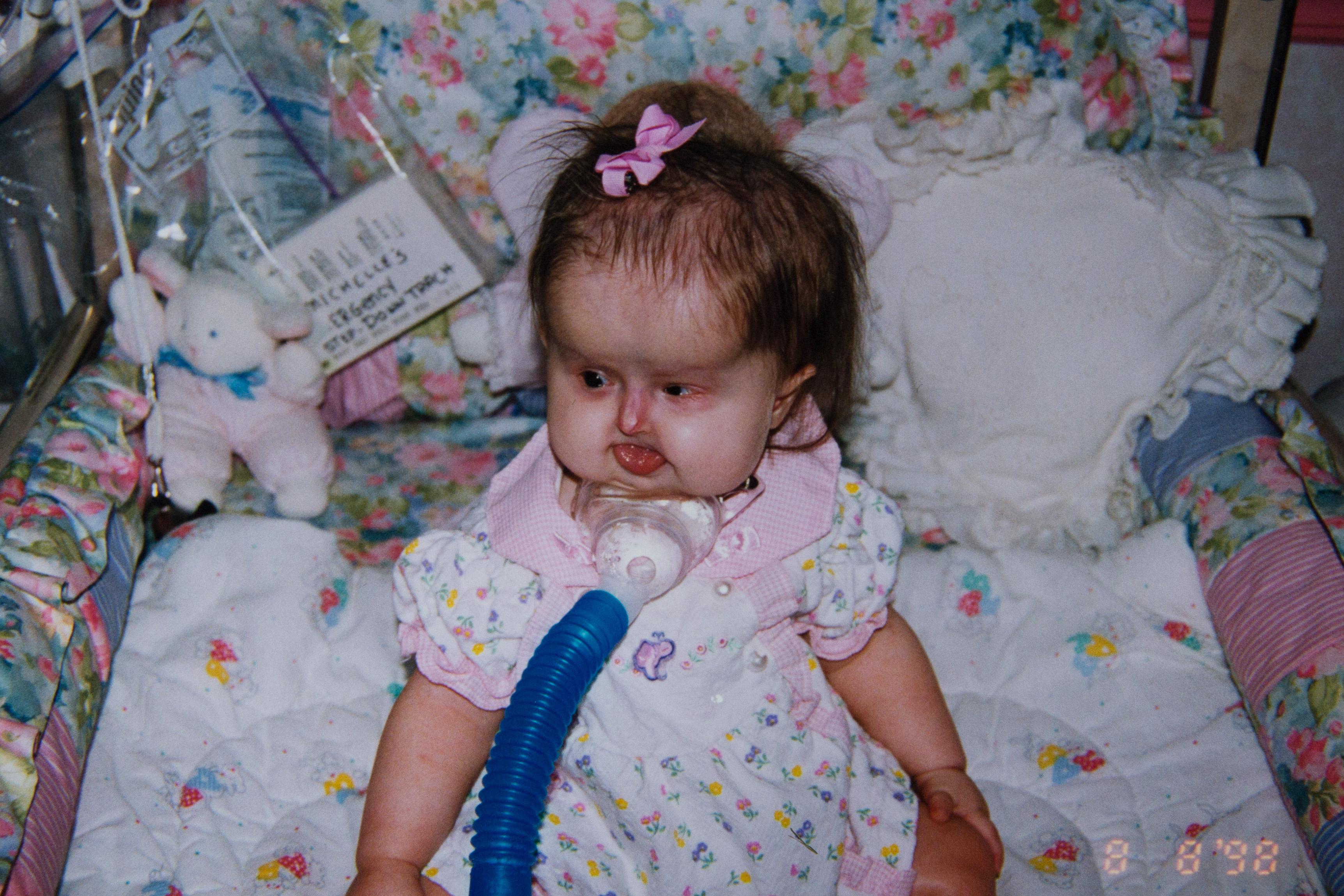 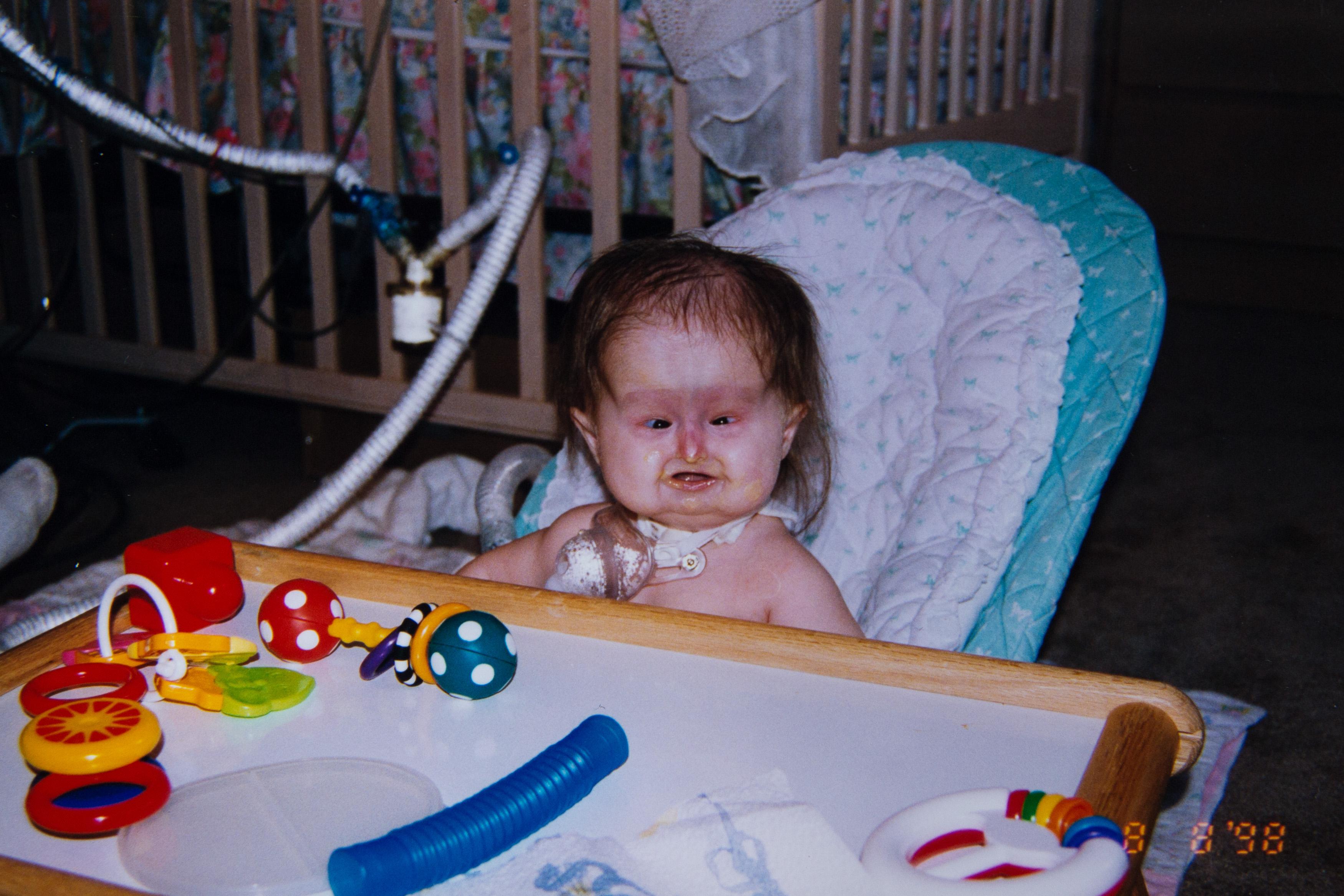 But when Michelle was born doctors immediately realised something was wrong.

"When the doctor gave us the diagnosis of Hallermann-Streiff syndrome my heart sank," Mary said.

"It was unknown what her prognosis was going to be. 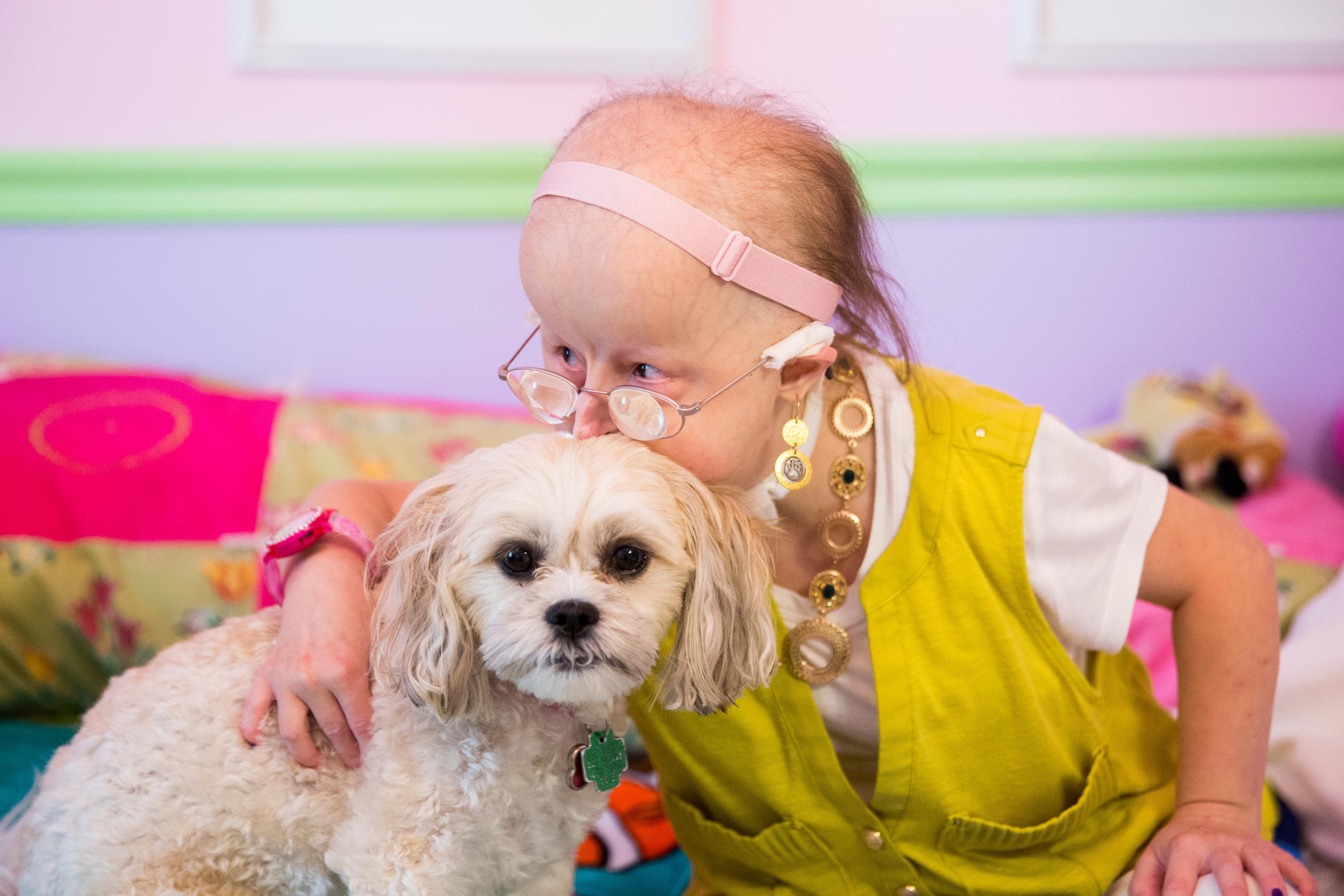 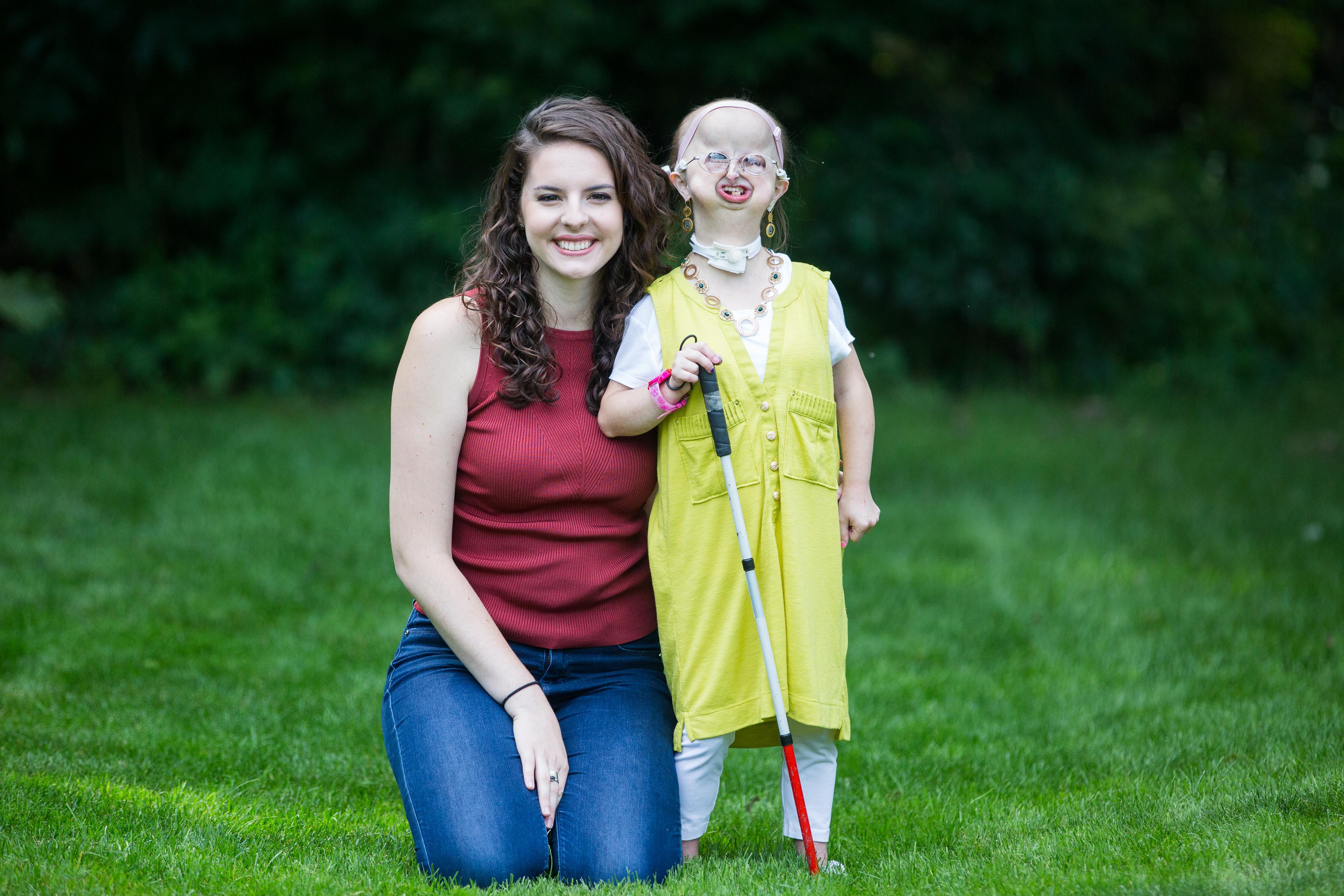 "They couldn’t tell us because they had never seen it before and it was devastating."

Michelle, from Illinois in the US, requires round-the-clock medical care through the night, has a dedicated nurse to travel with her to school, and has frequent hospital appointments.

"I do have to go into the hospital a lot. It’s like a second home to me, basically," she said.

Michelle suffers from 26 or the 28 symptoms of Hallermann-Streiff syndrome, including facial abnormalities, a small beak-like nose, a recessed chin, bilateral cataracts and frontal bossing of the forehead. 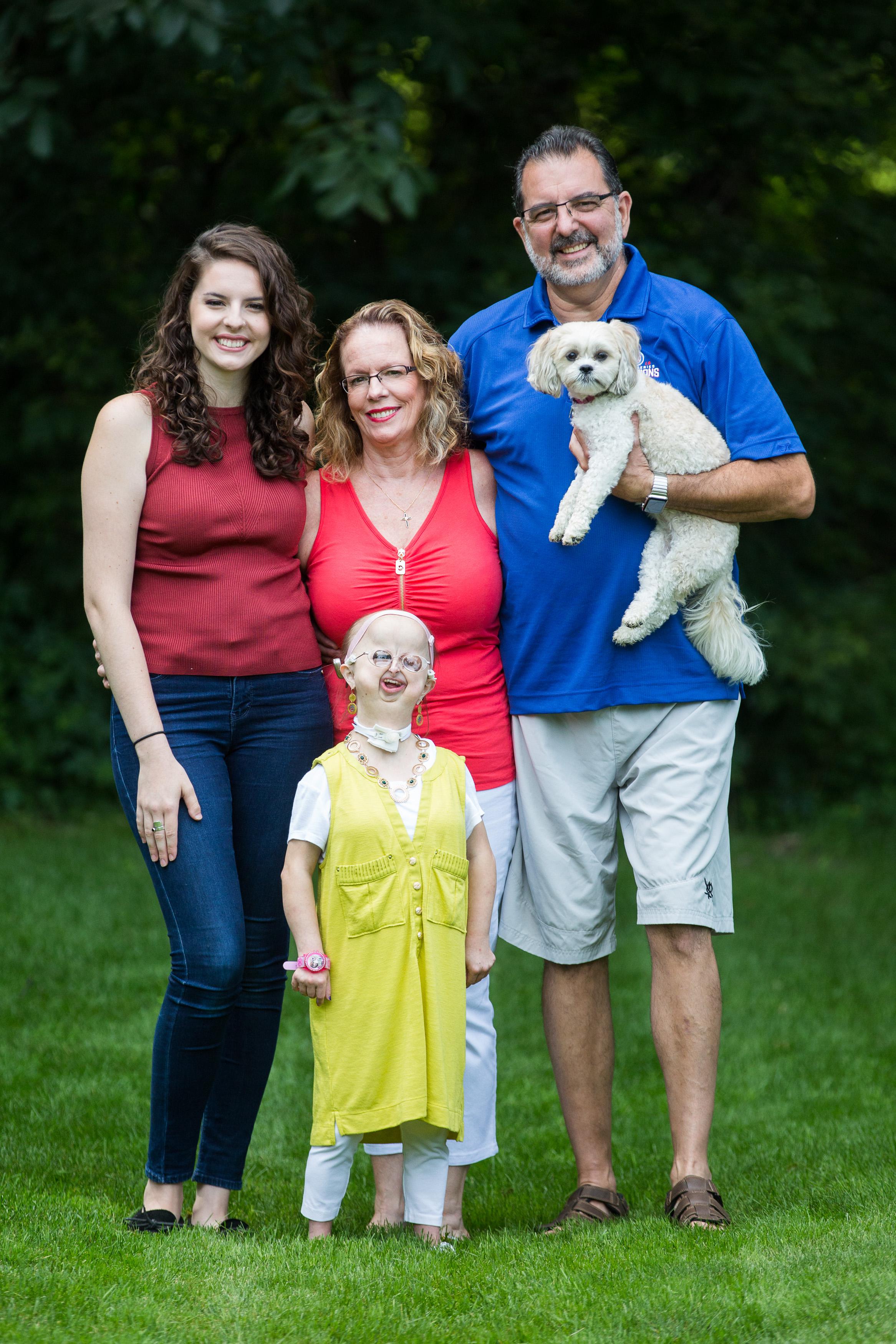 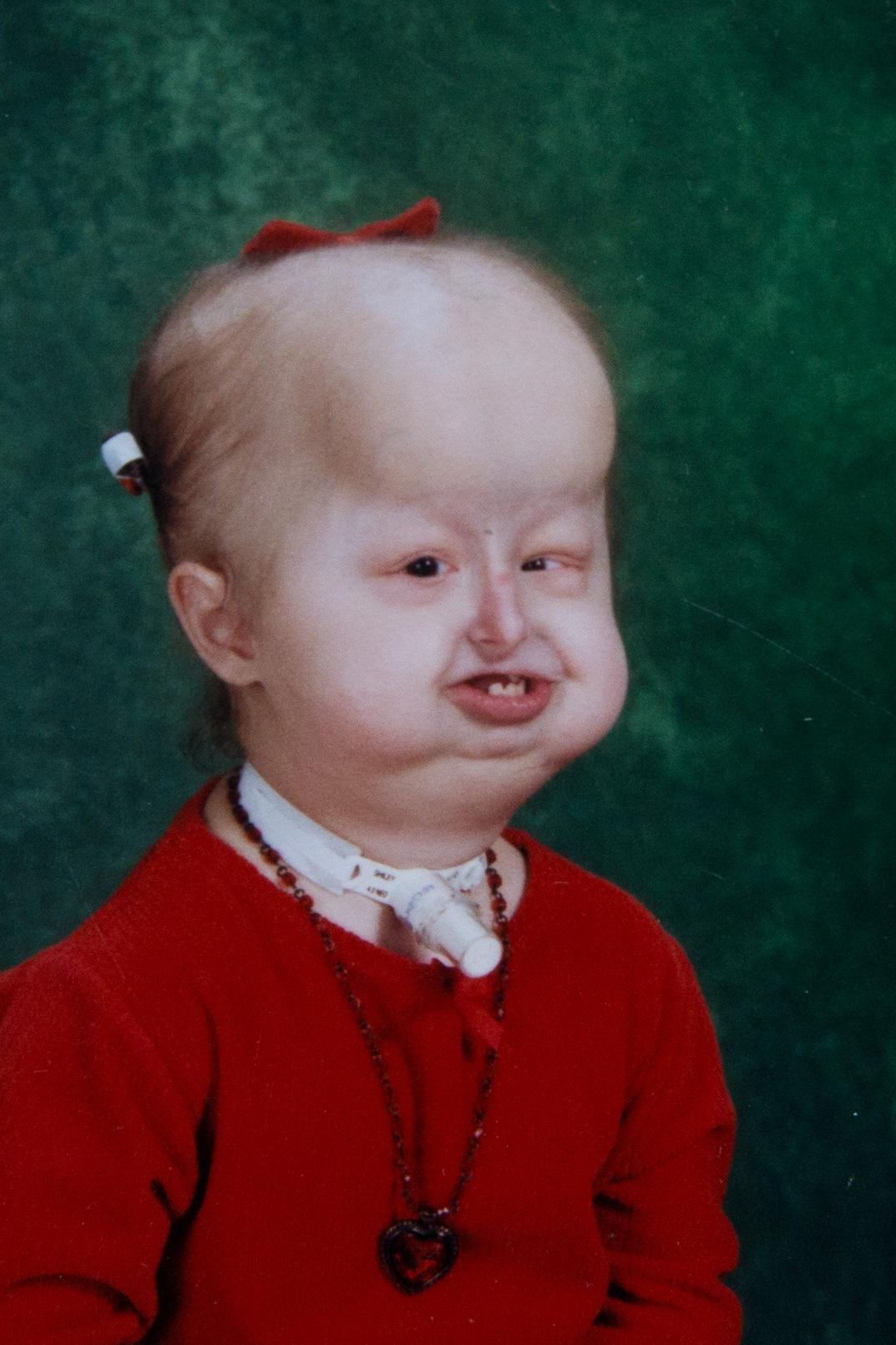 She also has a number of the secondary characteristics, such as dwarfism, cardiomyopathy (a type of heart disease), chronic pulmonary lung disease, short limbs, fragile bones and alopecia.

But she refuses to be held back by her condition, Mary said.

"Now Michelle is a 20-year-old young lady, she is smart as a whip and happy as ever," she said.

"My favourite thing about Michelle is that she has high self-esteem, she loves herself and she really has a lot of confidence, she moves on every day with a happy heart and she makes me happy even when I’m down in the dumps.

"You don’t even have to say a word to her and she will say 'Mum, are you okay? Is there something I can do? You know I love you'. 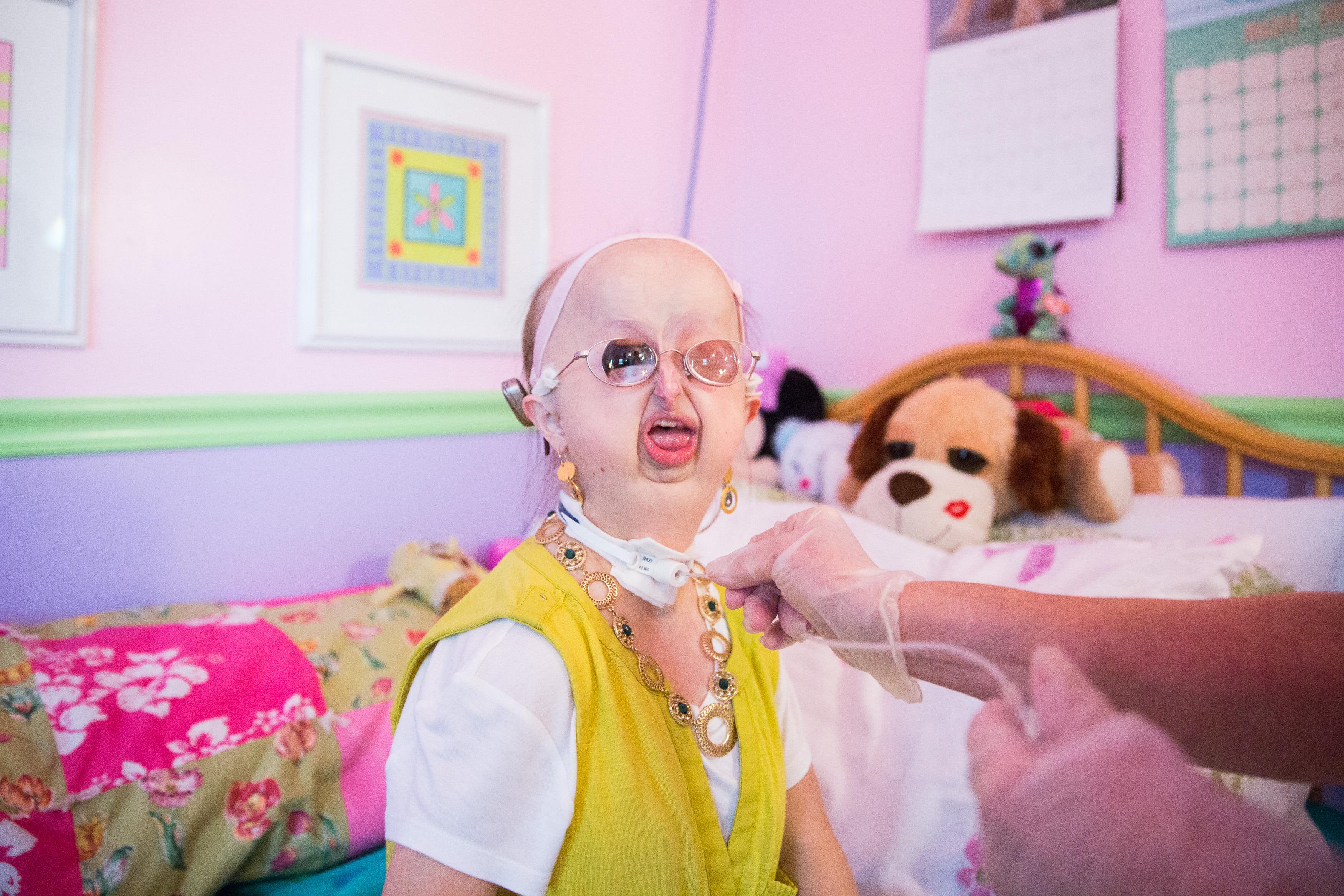 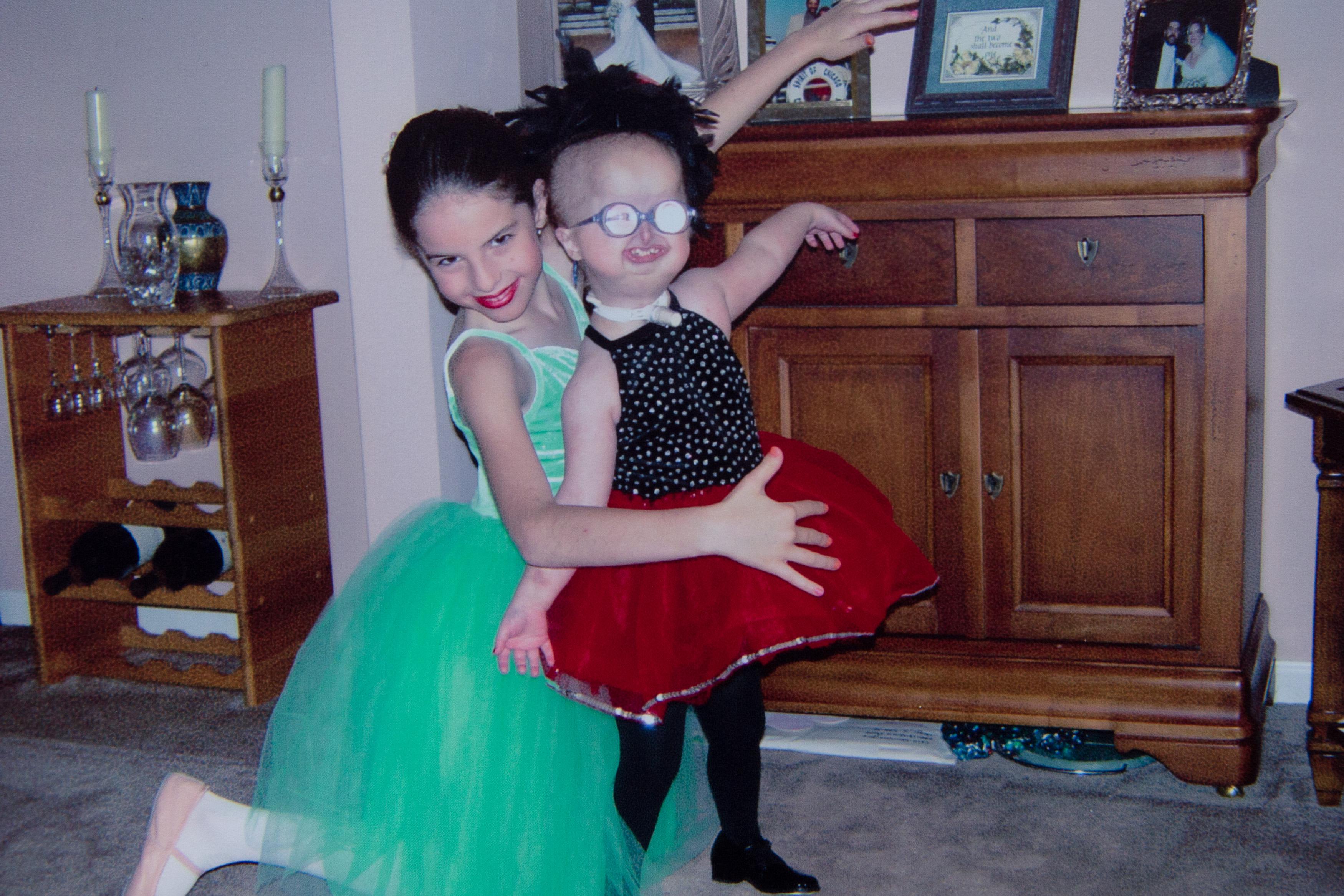 "She lights up people’s lives with how happy she is.

"She knows that she is different but it doesn’t bring her down."

But Michelle admits there are some aspects of her condition that hold her back from doing what she wants to do.

"The most annoying thing being small is there are lot of amusement park rides that I want to go on and I can’t because they have a height restriction," she said.

"Also my tracheostomy tube means I can’t go underwater, which sucks because I want to be a mermaid.

"I’ve never had a boyfriend, but I want one, because I am already 20 and Sarah had her first boyfriend at high school.

"I would love a boyfriend with lots of hair. I don’t care about the height because pretty much everyone is taller than me.

Hallermann-Streiff syndrome is a rare genetic condition that causes abnormalities of the skull and facial bones and a short stature.

In some people it can also cause intellectual disability.

While it is a genetic condition almost all recorded cases appear to have occurred randomly and are thought to be caused by a new gene mutation.

People with Hallermann-Streiff syndrome suffer from a range of symptoms including:

The cause of the condition has not been identified, but it is believed to be caused by a genetic mutation.

Treatment depends on the specific symptoms of an individual.

There is no cure for the condition, treatment instead focuses on managing the symptoms.

Early disease management for infants may include monitoring of breathing, consideration of tracheostomy, and various measures to improve feeding and ensure sufficient intake of nutrients.

Management of the condition may also include surgical reconstruction of the skull and face bones.

"My dream job would be to be a paediatric doctor, but my two backups would to be a fashion designer or an actress.

For now Michelle is cared for in the family home but government proposals to change the Medicaid programme she is on, and her parents are worried her future is uncertain.

"Michelle requires private duty nursing in the home in order for her to stay at home, meaning she needs 24 hour care," Mary said. 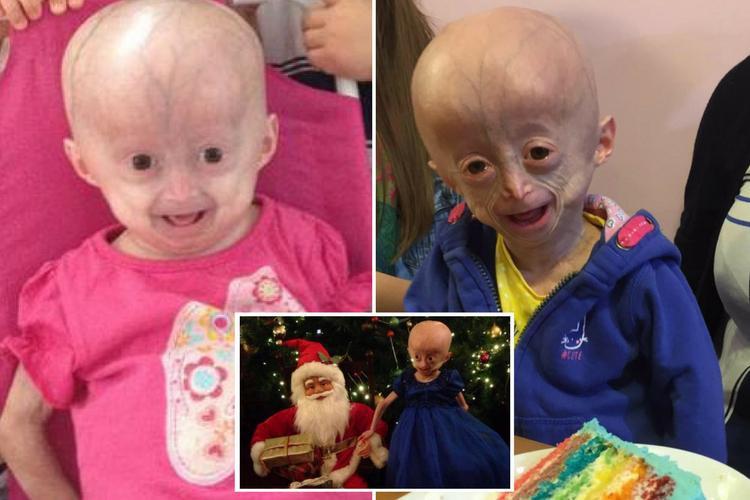 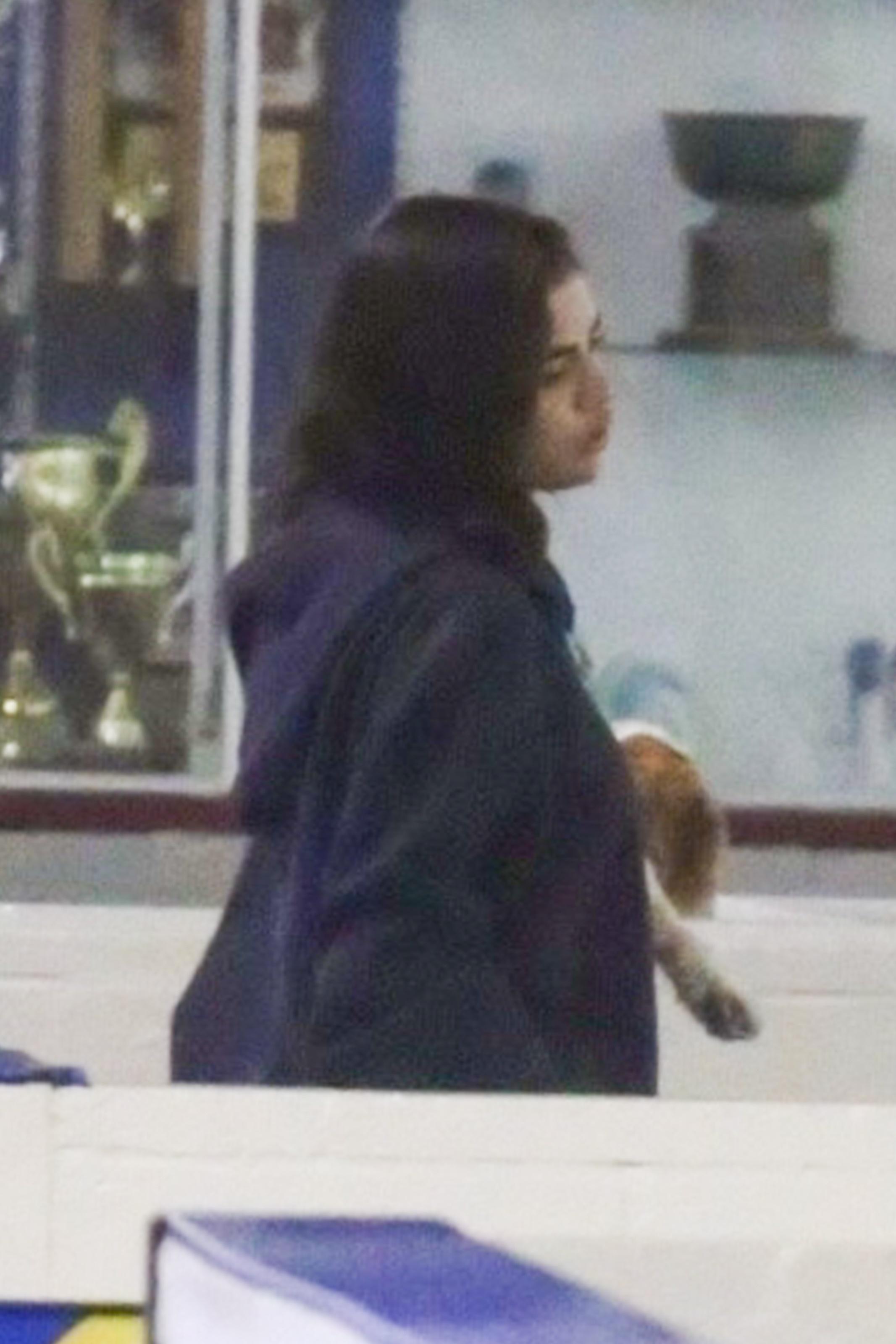 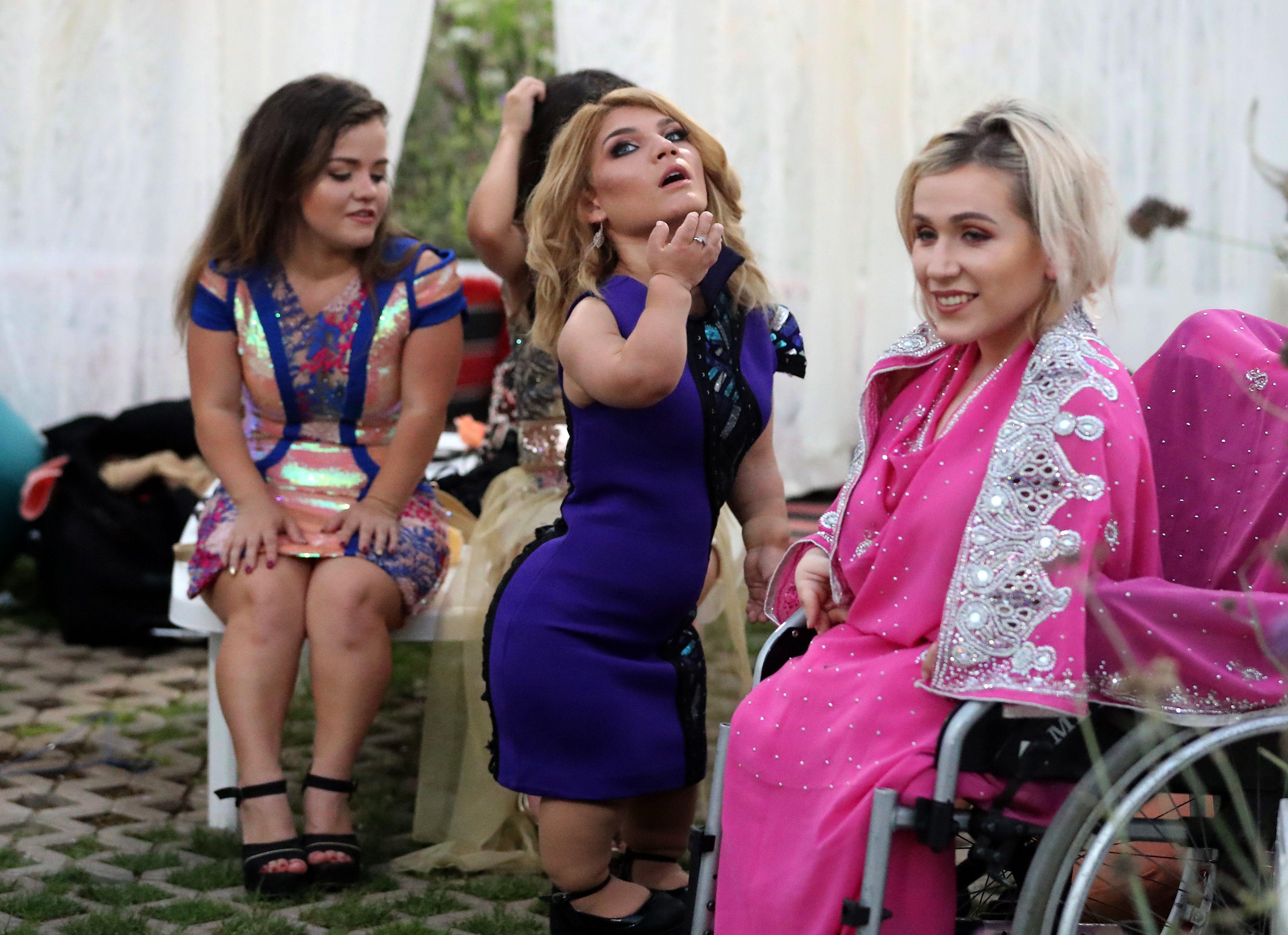 Dwarfism is a condition that affects thousands of Brits, but what causes it? 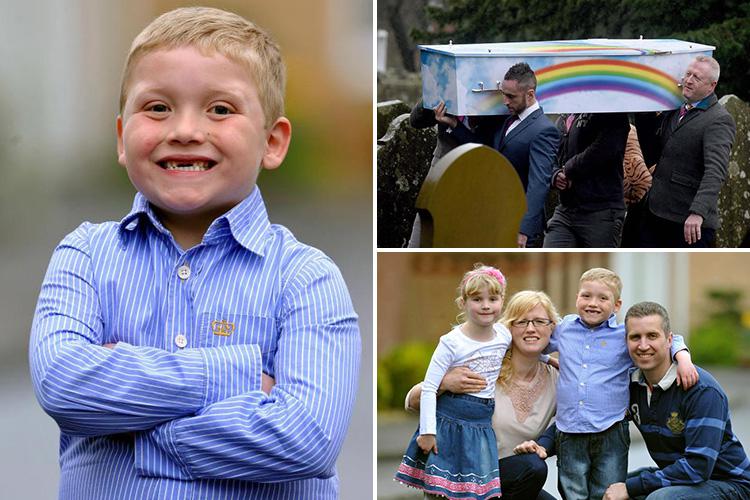 Final words of boy, 11, as he died from agonising rare condition

"Michelle’s long term outlook is unknown at this point.

"We have had several close calls but overall she is fairly healthy at the moment and we pray to god that they don’t take our nursing away."