PUBS, bars and restaurants in coronavirus hotspots could face fresh restrictions – despite no definitive proof they are driving outbreaks.

Ministers in England are under pressure after Scotland announced fresh restrictions on the hospitality sector including a ban on serving alcohol indoors from tomorrow. 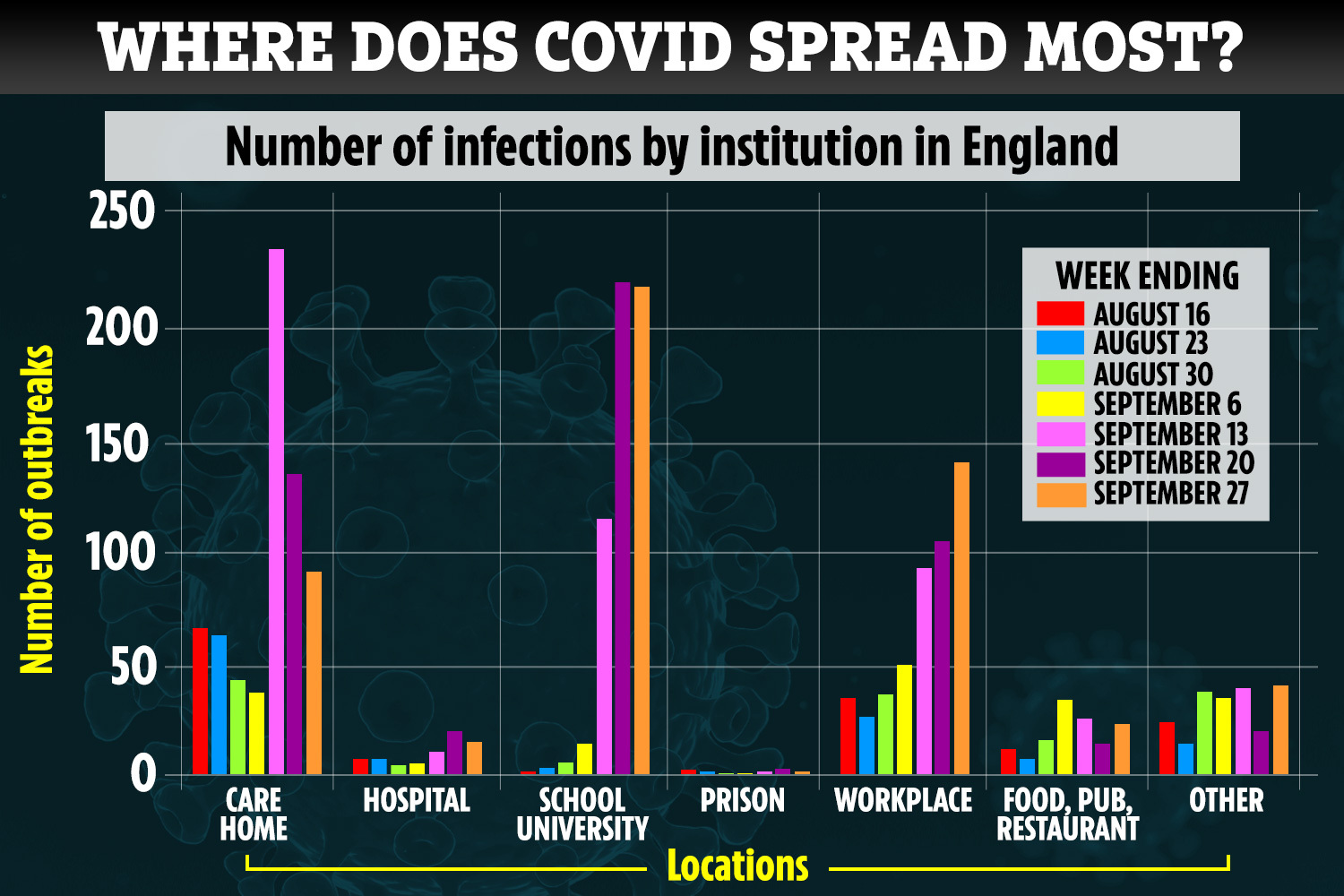 Downing Street said it's looking at a "range of measures", particularly in the North of England, where it says infection rates are rising fastest.

Yet, figures from Public Health England show the hospitality sector has been linked to just 4.2 per cent of infections.

In England, outbreaks are occurring more frequently in schools, universities and workplaces, according to the most recent published data, which includes cases up to September 27.

Since August 9, PHE has been collecting data on outbreaks in pubs and restaurants – where 148 subsequent incidents have been recorded.

That's compared with more than 500 each in education or employment settings.

Meanwhile, statistics from Public Health Scotland shows that one in five had been to a pub shortly before testing positive for Covid in September – although this doesn't prove they caught it there.

It comes at a time where hospitality businesses are already struggling from months of closures earlier in the year and now social distancing rules.

Coronavirus is understood to spread faster and easier indoors because particles are able to linger in the air rather than be blown away outside.

But hospitality bosses fear another full shutdown could signal the end for many and have urged the Government not take the same action again.

Ministers are considering fresh financial packages to help areas and industries hardest hit by lockdowns amid widespread calls for support.

But with infection rates soaring in cities including Manchester, Liverpool and Newcastle, regional leaders criticised the Government for not consulting them ahead of changes.

Leaked Government documents disclosed that a new three-tier system for restrictions will be announced on Monday before measures come into force on Wednesday.

Prime Minister Boris Johnson's official spokesman said: "We are seeing coronavirus cases rise across the entire country but they are rising faster in the North East and the North West.

"We are keeping the data under close review and we are considering a range of options to reduce the spread of the virus in order to protect communities and to protect the NHS."

The spokesman added: "Early data does suggest that a significant proportion of exposure to the virus is seen in the hospitality sector, and that is even more pronounced in younger age groups where we have been seeing the most rapid rise in infections.

"The data is new and we will continue to gather evidence and review it."

He added he is not yet in a position to publish it.

Health minister Nadine Dorries said further measures are needed because hospital admissions could be at a "critical stage" in around 10 days' time.

Earlier, Communities Secretary Robert Jenrick did not rule out telling pubs to shut as he warned cases in the North and Midlands areas including Nottingham were "rising fast and that is a serious situation".

He added to BBC Breakfast that he was working with Chancellor Rishi Sunak to consider fresh support for the hospitality sector because businesses could be put in a "really difficult, intolerable position".

Downing Street also hinted at financial help and did not rule out a fresh furlough scheme for the worst affected industries and per-head funding for local authorities.

"Any decisions we take will not be made lightly; protecting jobs, particularly the two million in the UK's hospitality sector, has been a priority throughout our response to the pandemic," the Prime Minister's spokesman said.

Ministers will announce a new three-tier Local Risk Levels approach to restrictions on Monday before they come into force on Wednesday, according to leaked documents disclosed by the Nottingham Post.

But the papers suggested that, while levels one and two have been signed off, ministers are still debating the details of level three.