While Australians are spending more on food delivery apps today than before the pandemic, getting a hot meal on time has become more expensive and difficult in recent months in Melbourne.

For months Valerio Calabro, owner of three pizza businesses across the city, has seen customers wait more than an hour for their deliveries due to the largest food delivery player, Uber Eats, being unable to find an available driver. 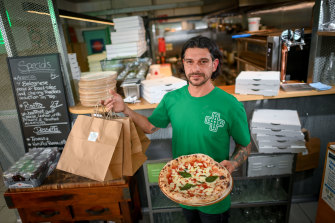 “Every day there is food left on the table that never gets picked up,” Mr Calabro said. “On a [recent] Friday night we had 20 pizzas sitting on the bench.”

He said it often took up to 20 minutes to find a driver to pick up an order once the food was cooked and ready to go.

“Sometimes the driver accepts and then cancels, and Uber has to find another driver,” he said.

Meanwhile, the customer is only told the restaurant is still preparing food. Eventually, if Uber cannot find a driver, it will cancel the order and customers are entitled to a refund. 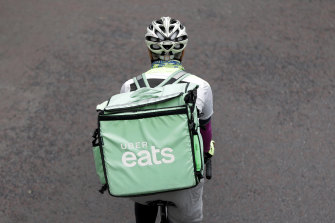 Uber’s delivery service has risen to prominence during the coronavirus pandemic.Credit:Bloomberg

But Mr Calabro said customers then tended to take out their frustration on his staff, some of whom had been reduced to tears over abusive phone calls.

“They can get their refund, but that’s not the point,” he said. “They’re hungry and when they’re hungry they’re angry.”

Some have pointed to a driver shortage, alongside the widespread staff shortages across the hospitality industry as the cause of the problem, with at least one app – Menulog – now trialling employing drivers directly in an attempt to plug the gap.

Wei Song, a 28-year-old student from Malaysia who delivers for Uber Eats in the CBD and inner suburbs on his bike, said he had seen a big increase in people joining up with delivery partners during lockdowns, who had since left again to return to other jobs.

But he also said delays were sometimes the fault of restaurants.

“Sometimes restaurants get too busy they’ll forget the Uber orders and then they will start cooking when I arrive there,” he said. “I can’t wait and cancel it and tell them another Uber driver will come and get the order.”

Sherry, a 24-year-old Melbourne Uber Eats driver, says there was no lack of drivers. Instead, he said poor pay was leading to drivers being picky about deliveries.

Sherry, who did not want to use his full name as he is still signed up as a driver with Uber Eats, began working full-time for the company in 2019 and was making $1400-$1800 a week.

But over the years Sherry said changes to pay rates for drivers he was earning less and less for the same amount of work. He left the gig economy as a result, and is now working instead as a subcontractor for a major alcohol retailer, doing home deliveries for a guaranteed $250 a day.

He said many delivery drivers operated on multiple apps at once, including Uber Eats, Menu Log, Door Dash and Deliveroo, and would pick better-paying jobs over smaller. That meant restaurants were often left with no driver to pick up the food they had prepared.

“Only two out of 10 jobs is worth picking up,” said Sherry. Compared to delivery bike riders, drivers like him were contending with increased costs, including vehicle upkeep and fuel prices hovering at close to $2 a litre.

“It used to be that each and every job was well paid, but now we have to be picky,” he said. “If you have to drive five kilometres for five dollars why am I going to waste my fuel?”

Uber would not confirm that its pay structure had changed for drivers, but a spokesman explained that delivery people received an estimate of each fare before they accepted the job.

“This takes into account estimated delivery time and time spent travelling to and waiting at the restaurant,” he said. “The fare shown to a partner is the minimum amount a delivery person will be paid. For example, if a delivery takes longer they may be paid more.”

Esther Sun, owner of Mum’s Burger Kitchen in Boronia, said she would often see Uber assign the same driver to pick up to different burger orders from her business that had been made 20 minutes apart.

“He’s got a car full of Menulog deliveries already, and then he’s waiting for the second burger order from us to be ready.” Ms Sun said. “At the end of the day no one is satisfied. The drivers are mad, we’re stressed and the customer is unhappy.”

Ms Sun said few customers realised how much of an impact delivery platforms had on small business. She said she’d also copped backlash over price increases that were unavoidable due to the dependence on delivery services during lockdowns.

She says while there are issues with Menulog and DoorDash, she says Uber Eats accounts for most of her issues as it is the most-used app by customers.

Chris Forte, owner of Topolino’s Italian restaurant in St Kilda, is now slipping flyers into delivery bags to local customers, advising them to avoid service fees, cold soggy food and long waits by ordering directly from his business for take-away, or using their in-house delivery drivers.

But Mr Forte said there would always be a need for businesses like his to use food delivery platforms, including for people who live further away.

“You’ll never eradicate the presence of Uber Eats and in many cases often Uber Eats is a good idea, because in some instances, we have customers who leave three, four or five kilometres away, and they order a $15 item – that’s not worthwhile for me to deliver.”

An Uber Eats spokesman said the company had introduced new options for restaurants, including restaurants being able to supply their own delivery people, or to use Uber Eats to drive demand for in-store pickups with reduced fees.

Menulog, Door Dash, Deliveroo confirmed they gave customers full refunds if their deliveries were cancelled or not picked up, and each had policies that would only allow customers to place orders if there were drivers available in the area.

Fascinating answers to perplexing questions delivered to your inbox every week. Sign up to get our new Explainer newsletter here.