Since the days of Franklin D. Roosevelt, the first 100 days of a US presidency carry a certain mystique. The period is meant to provide a window into a new president’s political soul.

In nearly every respect, as we’ve seen already, Joe Biden’s presidency will seek to be the opposite of Donald Trump’s. Last week’s inauguration tried to soothe and restore confidence in American democracy. His first executive orders reversed Trump’s trademark policies, including the immigration ban on Muslim countries, the US withdrawal from the Paris Agreement and the World Health Organisation, and the building of a wall along the Mexican border.

Then there’s his cabinet. Having promised to govern with a team that “looks like America”, Biden is proposing a cabinet with more people of colour and women than any other before it. 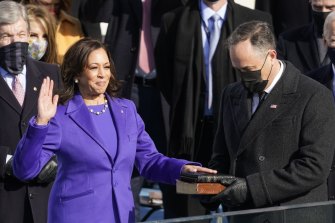 Kamala Harris is not only the first female vice-president but also the first African American and south Asian woman elected to the position.Credit:AP

Assuming confirmations by the Senate, the majority of Biden’s 25-strong cabinet will be non-white and just under half will be female. It’ll be the most diverse US cabinet. Given the resurgence of white supremacy implicated with the Trump presidency, the make-up of the Biden cabinet feels like an institutional rebuke of the past four years.

It’s hard not to think about how Australia shapes up in comparison, and what it may say about our two political cultures.

We barely see any diversity within the highest levels of politics and government. In a 2018 study conducted during my term at the Australian Human Rights Commission, we found only about 3 per cent of the federal ministry and 5 per cent of members of Federal Parliament had a non-European or Indigenous background. Far below the estimated 24 per cent within the general Australian population who have such backgrounds. 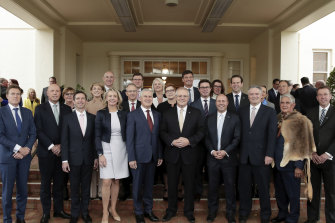 Prime Minister Scott Morrison with his cabinet in 2019.Credit:Alex Ellinghausen

Within the 22-strong Morrison cabinet, there is one Aboriginal man (Indigenous Affairs Minister Ken Wyatt), but no other minister who has a non-European background. Six women feature in the cabinet.

We don’t just lag the US. In Britain, for example, politicians from south Asian backgrounds fill two of the four “great offices of state”. In New Zealand, Jacinda Ardern’s 20-strong cabinet includes five ministers who are Maori and eight female ministers.

So why are we such laggards? Aren’t we meant to be one of the most successful multicultural societies in the world?

Some of our lack of diversity reflects the stubborn cultural default of Anglo-Celtic leadership within our institutions. Calls for more multicultural diversity are often either casually dismissed or ignored.

At another level, it may also reflect the history of Australia’s multiculturalism. When multiculturalism was introduced as policy in the 1970s, it followed the dismantling of the last remnants of the White Australia Policy.

Even with migrant ethnic politics, the change didn’t emerge from a groundswell of popular sentiment. It was largely done top-down, helping governments to move on from the international embarrassment caused by Australia’s stance on race.

This history had a political effect. For migrants, multiculturalism came almost as a gift from government, rather than something that had been decisively fought over and won. As a result, our multiculturalism can lack some edginess. Advocates don’t agitate the way they otherwise might.

Some Australian cultural reflexes reinforce the tendency. Many of us like diversity, but only as a therapeutic source of national pride. We don’t always like it when it challenges us. A certain disapproval seems reserved for minorities who don’t express perpetual gratitude for the opportunities presented by this great land. If you’re from a migrant background and offer criticism of Australian society, you risk being lashed as an unpatriotic ingrate.

There is, you might say, a certain pressure for our multiculturalism to be nice and polite, maybe even compliant. Many minorities feel a social expectation to be happy “quiet Australians” who won’t disrupt the peace.

Compounding the problem, many multicultural true believers too often think that being smart and working hard will be enough to see them rise in our society. They wrongly believe that meritocratic diversity’s time will inevitably come.

That isn’t the moral of the story if we return to the Biden diversity cabinet. We’d be naive to believe that enlightenment secures representation. That only happens when minorities reveal their collective power and use it.

Let’s not forget that Black Lives Matter has defined the cultural currents opposing Trumpism. Or that African American voters delivered Biden the South Carolina primary, without which he’d have lost the Democratic nomination race. Biden couldn’t have won the presidency were it not for the very solid black and minority vote behind him.

So if there are signs in the US that a critical mass of diversity has arrived in Washington, it’s not because Biden and his team are moved purely by progressive idealism. It’s because the balance of political power there has shifted, and because diversity can’t be ignored. We’re a long way away from that here.

Tim Soutphommasane is a political theorist and professor at the University of Sydney, and a former race discrimination commissioner.