WHO to visit Wuhan in coronavirus investigation

The World Health Organization confirmed their investigation into the origins of the coronavirus will include a visit in Wuhan, China.

A World Health Organization team has started its investigation into the origins of the coronavirus in China despite concerns that the Beijing government might try to block any embarrassing findings.

The team includes virologists and other experts from the United States, Australia, Germany, Japan, Britain, Russia, Netherlands, Qatar and Vietnam. 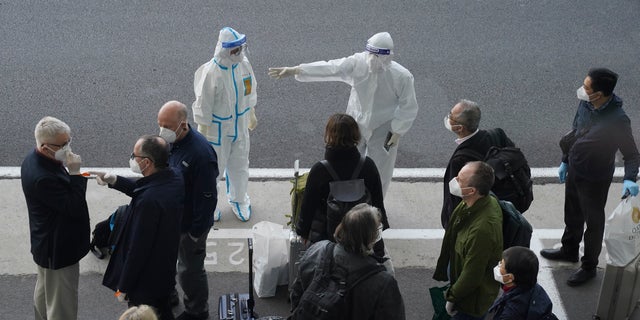 A worker in protective coverings directs members of the World Health Organization team on their arrival at the airport in Wuhan in central China’s Hubei province on Thursday, Jan. 14, 2021. A global team of researchers arrived Thursday in the Chinese city where the coronavirus pandemic was first detected to conduct a politically sensitive investigation into its origins amid uncertainty about whether Beijing might try to prevent embarrassing discoveries. (AP Photo/Ng Han Guan)

CORONAVIRUS IN THE US: STATE-BY-STATE BREAKDOWN

The team will observe a two-week quarantine – per protocols – but team members will start working via video conference with Chinese experts. Two members from the initial team also had to remain in Singapore after testing positive for COVID-19, but they will follow once they test negative.

A possible focus for investigators is the Wuhan Institute of Virology in the city where the outbreak first emerged in late 2019. One of China’s top virus research labs, it built an archive of genetic information about bat coronaviruses after the 2003 outbreak of Severe Acute Respiratory Syndrome (SARS).

The investigation commences following months of discussions and further bureaucratic hurdles when China announced that some members of the team hadn’t received valid visas. 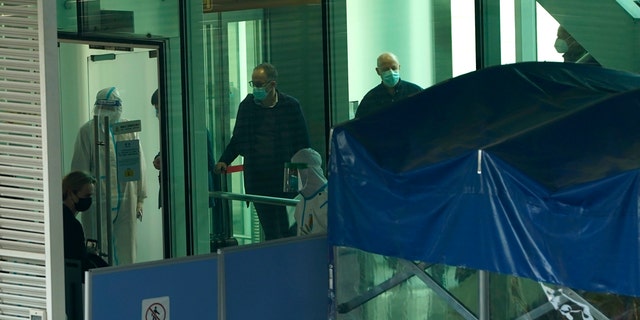 Passengers arriving on a flight from Singapore are processed by staff in protective clothing and directed toward a covered walkway to a separate exit from the airport terminal in Wuhan in central China’s Hubei province on Thursday, Jan. 14, 2021. Chinese state media reported that a WHO team arrived in Wuhan on Thursday to research the origins of the coronavirus. (AP Photo/Ng Han Guan)

“The government should be very transparent and collaborative,” said Shin-Ru Shih, director at the Research Center for Emerging Viral Infections at Taiwan’s Chang Gung University.

Beijing has long resisted demands for an international investigation, instead pushing fringe theories that the virus entered China from abroad.

2 NEW CORONAVIRUS VARIANTS THAT LIKELY ORIGINATED IN US IDENTIFIED IN OHIO: RESEARCHERS 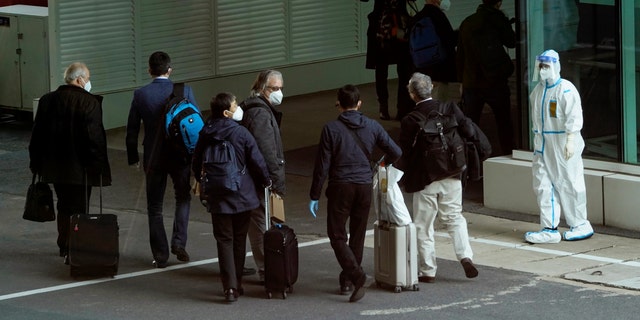 Members of the World Health Organization team arrive at the airport in Wuhan in central China’s Hubei province on Thursday, Jan. 14, 2021. A global team of researchers arrived Thursday in the Chinese city where the coronavirus pandemic was first detected to conduct a politically sensitive investigation into its origins amid uncertainty about whether Beijing might try to prevent embarrassing discoveries. (AP Photo/Ng Han Guan)

When Australia called for an independent inquiry into the origin of the virus, Beijing retaliated by blocking imports of Australian goods.

“The WHO will need to conduct similar investigations in other places,” an official of the National Health Commission, Mi Feng, said Wednesday.

Efforts to closely guard information surrounding the virus and its origins may have led to delayed warnings about the pandemic and difficulties establishing early testing capabilities.

A “scientific audit” of Institute records and safety measures would be a “routine activity,” said Mark Woolhouse, an epidemiologist at the University of Edinburgh. He said that depends on how willing Chinese authorities are to share information.