It took a decade for Chinese scientists to find the bats thought to be responsible for the 2003 SARS coronavirus outbreak.

In the Yanzi and Shitou caves in the mountainous Jinning district in China’s Yunnan Province, thousands of Chinese horseshoe bats were biding their time, quietly harbouring a natural reservoir for SARS. The scientists from the Wuhan Institute of Virology and the EcoHealth Alliance found that the disease was most likely transferred to humans through an infected civet, a small cat-like creature. 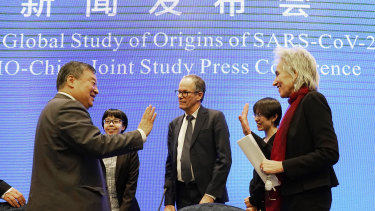 They also found that it was possible the bats transmitted SARS directly to villagers in the area. The villagers had witnessed bats flying close to their houses, one had handled a bat corpse.

The 10 years of research saw painstaking, multinational collaboration to find the source of a disease that infected 8000 people around the world, yet still – to this day – it is not definitive.

The timeline should give caution to any hopes of a speedy result from an inquiry into its successor, a much more destructive disease, COVID-19. 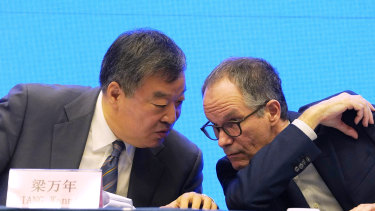 Peter Ben Embarek, of the World Health Organization team, right, chats with his Chinese counterpart Liang Wannian during a WHO-China Joint Study Press Conference held at the end of the WHO mission in Wuhan on Tuesday.Credit:AP

“Did we change the picture dramatically compared to what we had before? I don’t think so,” he said. “Did we improve our understanding and add details? Absolutely.”

The early conclusion is this: the virus is likely to have been transmitted via an intermediate animal more closely related to humans than bats, but the original source or location of the disease remains unknown.

The difficulty for the WHO and the dozen highly regarded scientists, virologists and epidemiologists on its investigating team is managing expectations of a result, while undertaking the most politically charged scientific investigation in history.

More than 2.3 million people have now died from COVID-19, it has shattered the global economy and has become the warm-up for the next era in superpower competition between the US and China.

Australia has a particular investment in the outcome of this investigation. Beijing made sure Canberra paid a high price for its public lobbying for the inquiry: $20 billion in trade strikes and counting.

The challenge of getting Chinese authorities to agree to host independent inspectors in the first place was not lost on the stage at the Hilton Optics Valley Hotel on Tuesday night. The report on the “Global Study of the Origins of SARS-CoV-2”, was presented at the “WHO-China joint study press conference” after a mysterious 1.5-hour delay to the event.

More significantly, the preliminary findings on Tuesday echoed some of China’s top talking points on the outbreak of the disease.

China team lead Dr Liang Wannian, a senior official at the National Health Commission, said there was no indication of COVID-19 in the Wuhan population before December 2019.

Dutch virologist, Marion Koopmans, who leads the WHO’s collaborating centre for emerging viral diseases, agreed and said the team needed to look elsewhere, including in Europe, for the earliest evidence of the disease.

“In the next steps we should really go and search for evidence of [the] earliest circulation wherever that is indicated,” she said. 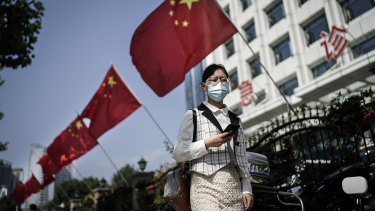 A women wears a face mask as she passes a hospital gate in Wuhan. Credit:Getty

Embarek then emphasised that much more work needed to be done with regards to frozen food. Significantly, the WHO team found that vendors in the Wuhan market were trading frozen domesticated wildlife products from farms within China, which could have carried the disease. Some like rabbits, bamboo rats and ferret badgers are known to be susceptible to the coronavirus. “This, to me, is a critical finding!,” said WHO zoologist Peter Daszak.

Chinese authorities have publicly pushed the theory that the virus has been carried in frozen food since June but targeted overseas imports rather than local produce. They have put restrictions on Australian seafood, American pork and Brazilian beef over coronavirus contamination fears. US and European scientists have disputed the claim that it could be transmitted through frozen food and the WHO itself said in January: “There is no evidence to date of viruses that cause respiratory illnesses being transmitted via food or food packaging.”

Now the frozen food transmission theory is firmly back on the table.

At the same time, the WHO’s dismissal of the Wuhan laboratory leak theory, first propelled by the Trump administration, will do little to quieten critics of the Chinese Communist Party’s handling of the crisis.

Embarek said the lab theory was ruled out after questioning Wuhan Institute of Virology staff about what they thought about the possibility. “They’re the best ones to dismiss the claims and provide answers to all the questions,” he said. He did not say if samples had been taken from the lab or provided by Chinese scientists.

Embarek said while accidents do happen, they were very rare and the laboratory incident hypothesis was “extremely unlikely” because there was no record of a virus with the characteristics of COVID-19 being studied anywhere in the world. “Therefore it is not a hypothesis we suggest to support for our future work,” he said.

David Relman, a microbiologist at Stanford University, told the Washington Post on Wednesday he was sceptical. “If the only information you’re allowing to be weighed is provided by the very people who have everything to lose by revealing such evidence, that just doesn’t come close to passing the sniff test,” he said.

This WHO investigation, achieved after months of diplomatic wrangling, may never appease those determined to pin China for the virus or those determined not to. That’s science. Unfortunately, the science has now become part of a much larger geopolitical game.