Victoria has recorded its deadliest period on record for drownings, but many people are still ignoring safety signs at dangerous waterways.

Seven people have died in the water this year, prompting urgent pleas from authorities for swimmers and boating enthusiasts to take greater care. 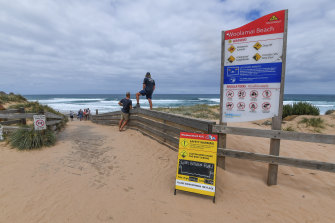 Warning signs at Cape Woolamai, which is among the most treacherous beaches in Victoria. Credit:Justin McManus

“These findings highlight the importance of using multiple risk management strategies to prevent drowning and aquatic injuries, such as signage, public awareness campaigns, education and lifeguard services,” she said.

“Our advice to beachgoers and waterway users is that every beach and waterway has different hazards, so we do urge you to take time to read safety signs, to understand the local hazards, before entering the water.”

The responsibility for displaying signs at waterways lies with the land managers rather than Life Saving Victoria, but the service can provide recommendations about signs and other matters including education.

Forty-two people have drowned since July last year, including seven in the past 10 days, making it the most deadly six-month period on record. The toll is also 15 more than the five-year average.

On Saturday a 58-year-old man died near Anglesea after heading out with another man in a small boat that overturned. His companion made it back to shore. On the same day a man was pulled from the water at Thirteenth Beach near Barwon Heads after getting into trouble. He died at the scene. 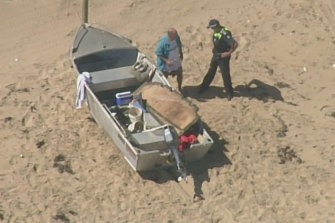 Rescue crews were called to an Anglesea beach after a small boat capsized just after 2pm on Saturday.Credit:Nine News

While zero to 14 is the age group most at risk of drowning, authorities are also increasingly worried about men under the age of 45 who “overestimate” their abilities.

For the past decade, emergency services have been grappling with a “disturbing trend” among drowning victims who have fallen into the water from boats. Seventy-five per cent of those who died due to a boating accident were either not wearing a life jacket or were wearing it incorrectly, according to Cameron Toy, the director of Transport Safety Victoria.

“The message here is: wear a life jacket even if it’s not required by law,” Mr Toy said. “We would really like to see people starting to get into the habit of putting a life jacket on because … it’s when you unexpectedly enter the water that things go wrong and you really want to avoid that.”

Mr Toy was at The Warmies in Newport with Fishing and Boating Minister Melissa Horne on Monday morning to highlight water safety messaging.

He said research conducted for his department consistently revealed men under the age of 45 were over-represented in drowning figures, fuelled by the cohort “overestimating” their abilities in the water. He said Transport Safety Victoria had also investigated the effectiveness of warning signs at waterways and found people were not paying attention to the messages.

“[The research] tells us that unless the message changes regularly, people won’t pay any attention to it,” Mr Toy said.

“Signage is a good way of getting messages across, but it’s not the only way. That’s why we’re pretty heavily involved in partnering with other agencies, using social media to get our messaging out, and it’s not just something for us to do – we really rely on a whole-of-government approach for that.”

The department has also looked at embedding boat safety in school curriculums, but has not struck a formal deal with the Education Department.