Waitrose is making its workers pay back the time they spend self-isolating due to coronavirus, it has been claimed.

Supermarket bosses have told staff they will have to pay for up to two weeks of leave if they are self-isolating or doing so to protect someone else in their household.

Employees with severe underlying health problems are currently ‘shielding’ for 12 weeks and are unable to work or leave the house at all.

A whistleblower who works for the upmarket food store told The National they fear infectious staff will return to work and risk spreading the virus to others because they ‘can’t afford’ to be off. 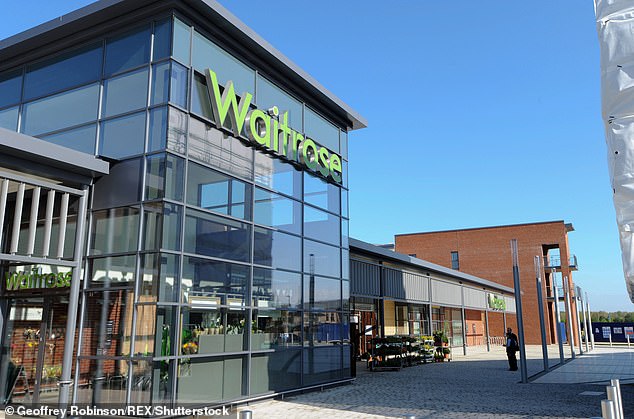 Waitrose (Milton Keynes store pictured) is making its workers pay back the time they spend self-isolating due to coronavirusy, one worker has claimed

The anonymous employee told the newspaper: ‘Lots of people who have worked with Waitrose for ages and who are self isolating or shielding family members are now getting phone calls saying they will have to pay time back.

‘It’s just a massive kick in the teeth. Most of the staff are really honest but now they will have to lie and come in to work even if they are not supposed to or pay back between 74 and 78 hours if they are full time and self-isolate for a fortnight.’

Waitrose is owned by the John Lewis Partnership, which was forced to put nearly 1,400 staff on furlough after John Lewis closed 50 stores nationwide.

Some have been drafted in to help at Waitrose, but the whistleblower claims they are not faced with the same ‘punitive’ payback measures as their colleagues.

John Lewis staff who are ‘shielding’ at home will get 100 per cent of their salaries for the 12 weeks they are off work.

But the Waitrose whistleblower says their colleagues are ‘furious’ that the two halves of the company are being treated differently and have escalated a complaint to senior management.

Yesterday it was announced that all Waitrose employees will receive a £200 bonus for continuing to work throughout the deadly virus outbreak. 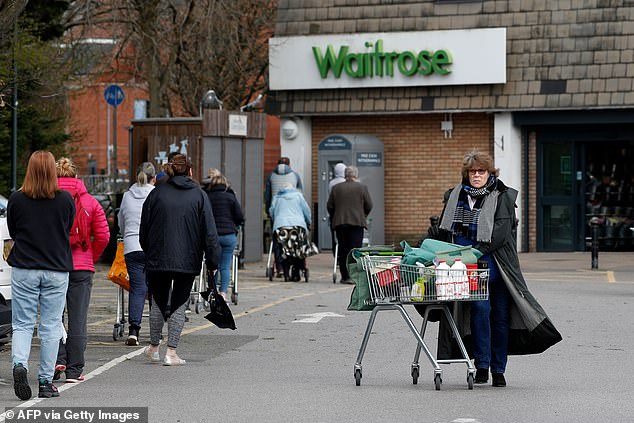 Shoppers are pictured queueing outside a Waitrose store in south London

Both in-store and through their home delivery, Waitrose has taken a number of measures to protect staff and customers from COVID-19.

Last weekend it banned couples from shopping together to increase capacity in stores while still maintaining social distancing.

Like at many other supermarkets, tape has been laid down on the floor to help shoppers stay 6ft apart from one another and queues are being spaced out evenly.

A spokesman for Waitrose told the newspaper it is asking staff to ‘time bank where possible’.

They added: ‘We understand that isn’t possible for everyone so each case will be looked at on an individual basis and discussed with their manager.  The health of our partners is our absolute priority.

‘We have provided guidance to partners who may have a suppressed immune system to check with their primary healthcare professional regarding their specific needs before discussing work adjustments with their manager.’ 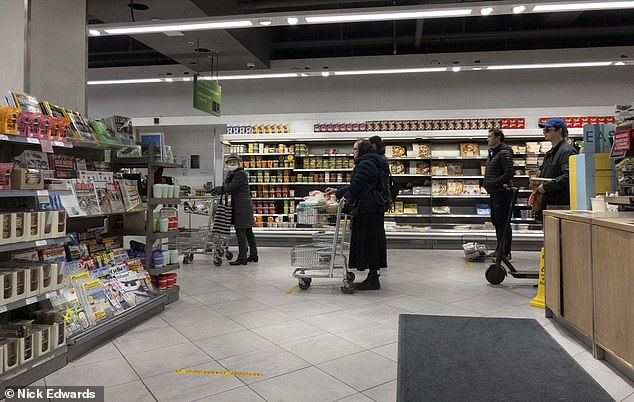 Like at many other supermarkets, tape has been laid down on the floor to help shoppers stay 6ft apart from one another and queues are being spaced out evenly (Kensington store in west London pictured)