Volunteers search for remains of ‘Milk Carton Kids’: Brother of one of two boys who vanished 25 years ago joins dig near football ground after receiving ‘credible’ tip-off

The brother of one of the missing Milk Carton Kids who disappeared 25 years ago has joined hundreds of volunteers searching for their remains near a football ground after receiving a ‘credible’ tip-off.

David Spencer, 13, and Patrick Warren, 11, were out playing in Chelmsley Wood, Birmingham when they vanished on Boxing Day in 1996. West Midlands Police initially treated them as runaways, saying there was no evidence to suspect they had come to any harm.

The bodies of the schoolboys – known as the Milk Carton Kids after police printed pleas for information on milk containers – have never been found. The last known sighting of them was at a petrol station at 12.45am on December 27, 1996.

However,  a Channel 4 documentary called In the Footsteps of Killers has alleged that child-killer Brian Field had been seen with the boys in the days before they vanished.

David’s brother Lee O’Toole, who was nine when his sibling disappeared, is now leading a dig on land off Damson Wood Lane, near Solihull Moors FC, to find their remains after organisers say they received ‘credible’ new information following the TV programme.

As hundreds of volunteers started working in shifts yesterday, Mr O’Toole, now 34, said: ‘The community is doing what the police should do. A man contacted me directly to say he had seen a man digging in a field off Damson Wood Lane, near Solihull Moors Football Club, at the time they disappeared. 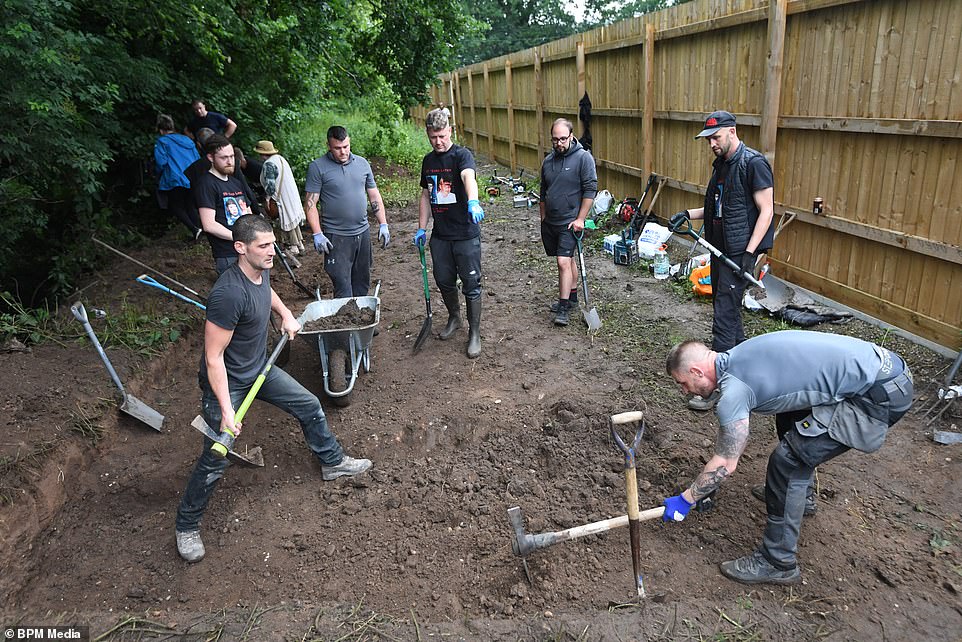 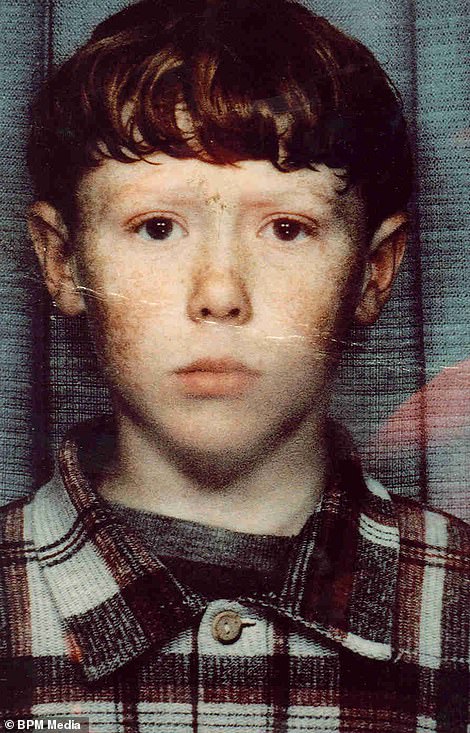 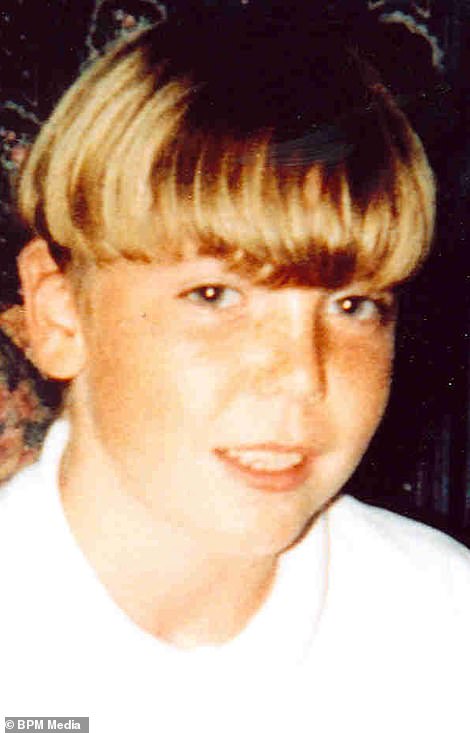 David Spencer (left) and Patrick Warren (right) were out playing in Chelmsley Wood, Birmingham, when they vanished on Boxing Day, 1996 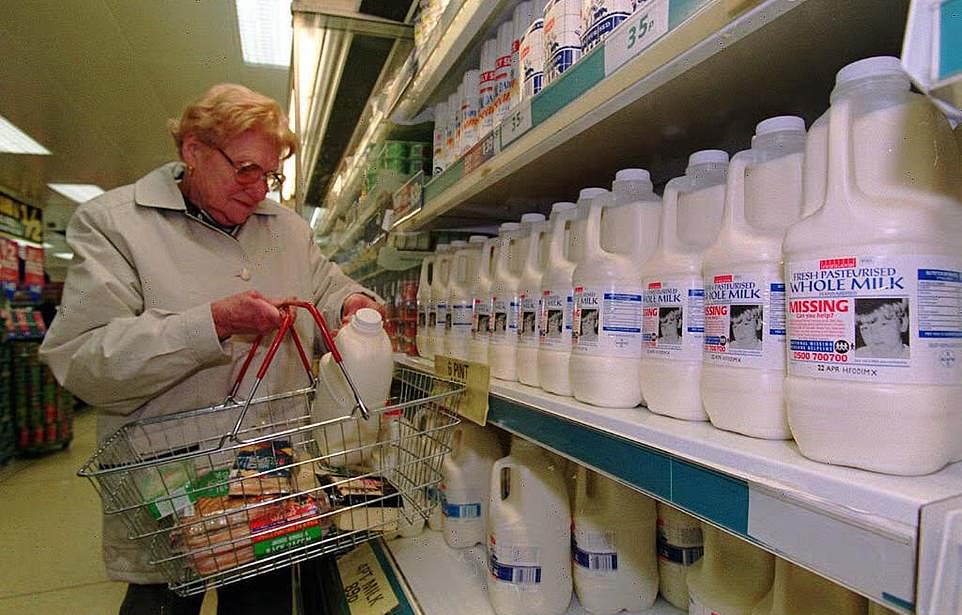 A shopper at Iceland supermarket in Perry Barr, Birmingham, collects a four-pint milk carton which displays a picture of missing children, in 1997

‘Apparently he’s been telling the police for years and they’ve never acted on it. I don’t know what more police need. They’ve left me no choice other than to put the shovel in the ground.’

Posting a video of the search on Facebook, a member of the group added: ‘We have been tipped off, due to the documentary, someone has come forward and told us that this place cannot go unlooked.

‘We’re going to be here every single day. We are at the back of the 3G football pitch at Solihull Moors exactly at the half-way line. Everyone deserves justice. Please repost this. We need people to come here.. Bring your shovels and machinery. We need your help.’

West Midlands Police, who are still investigating the boys’ disappearance, have urged volunteers to stay away from the unofficial dig site.

A force spokesperson said: ‘We recognise and sympathise with the strong sense of feeling surrounding the disappearance of Patrick Warren and David Spencer in 1996. It’s highly emotive for their families, friends and the wider community.

‘We understand there are many frustrations and a lack of trust around our initial investigation and the many reviews we’ve carried out since.

‘We also know a group has been set up encouraging people to take matters into their own hands and dig at the back of a football ground in Damson Wood Lane. We’d urge people not to do this. Searching should be left to us and is based on areas of interest, we use trained specialist experts who are able to preserve any evidence that may be found. 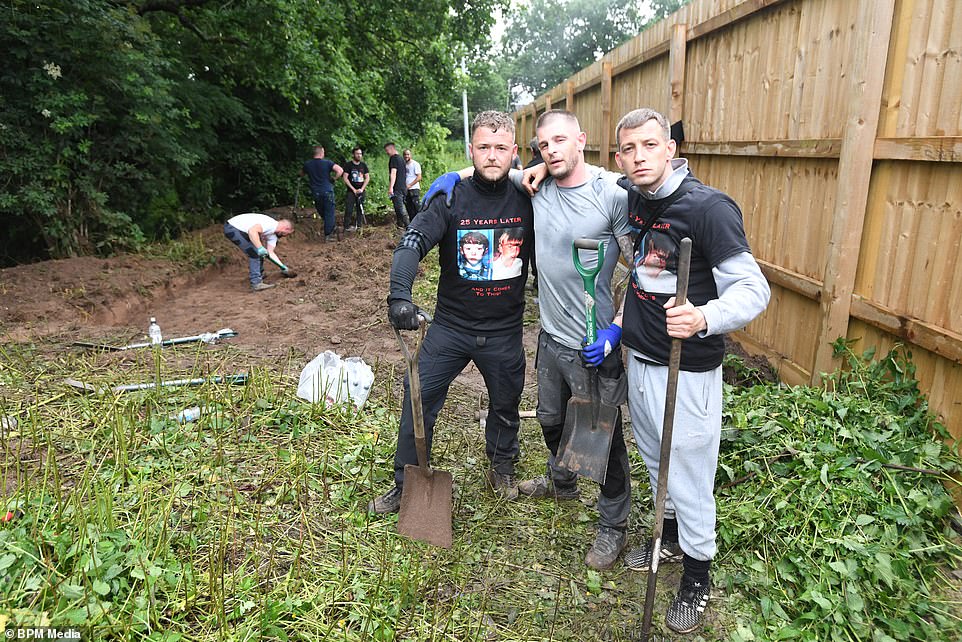 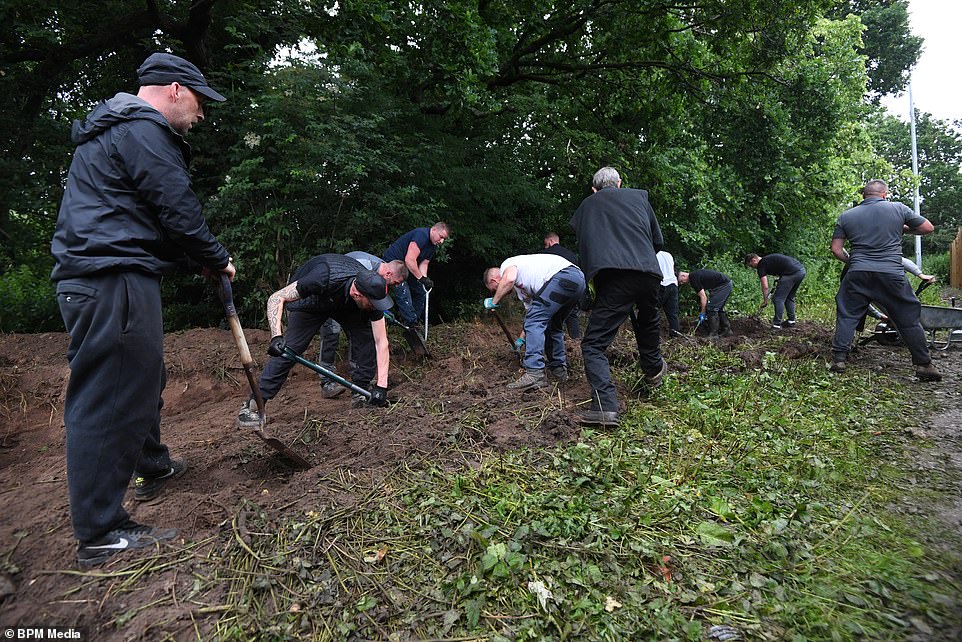 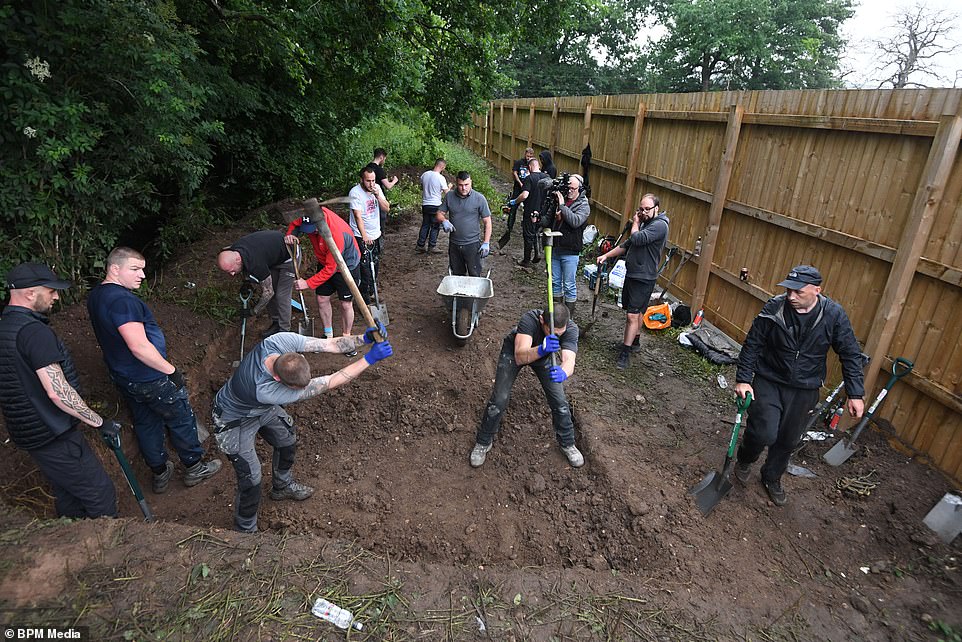 David’s brother, Lee O’Toole, was part of a group carrying out the unofficial dig in Solihull, West Midlands 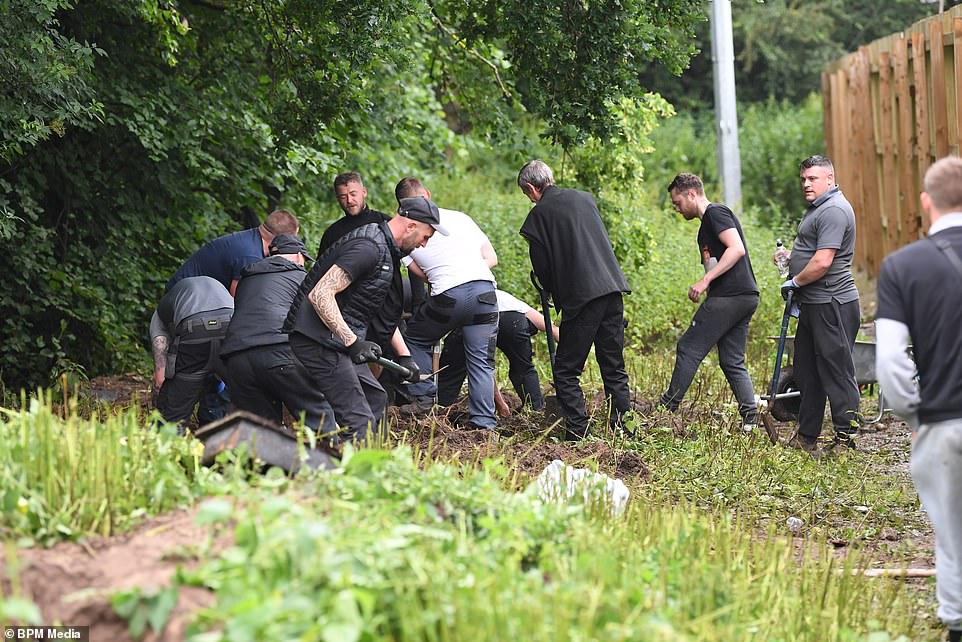 ‘We’re in touch with the Spencer family, and others, who are providing new information.’

It is not the first time land near the football club has been searched for the two boys.

In 2003, police announced that they had arrested a 37-year-old man in connection with the disappearances but he was later released on bail and has never been charged.

In 2006, the police announced they were ‘closer than ever’ to solving the mystery of what happened but no one has ever been charged with their abduction.

In the same year officers dug up a field in Old Damson Lane – half-a-mile away from Solihull Moor FC – but abandoned the search several weeks later after finding nothing.

Following a review of the case in 2006, convicted murderer and paedophile Brian Field was interviewed by police in connection with the case.

Field denied any involvement in the boys’ disappearance and police said he was just one line of enquiry in their investigation. The paedophile was living in Solihull when he was stopped for drink-driving in 1999.

He was jailed for life in 2001 for the rape and murder of 14-year-old Surrey schoolboy Roy Tutill, killed in 1968.

Timeline on the disappearance of the ‘Milk Carton Kids’ 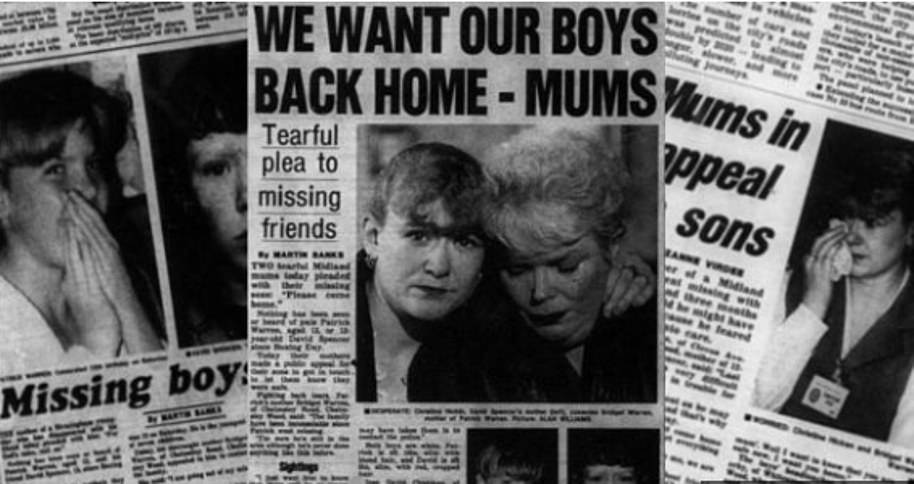 The news coverage at the time shows how the boys’ families from Chelmsley Wood – a sprawling, working class estate on the edge of Birmingham – appealed for information

1996 – Patrick Warren, 11, and David Spencer, 13, disappeared on Boxing Day after playing together near their home in Chelmsley Wood, Solihull

Police initially believed they were two streetwise children who had run away from home.

1997 – Four months after their last sighting, the boys became the first children to appear on four-pint milk cartons in 770 Iceland stores, as part of a campaign by the National Missing Persons Helpline.

The initiative was copied from the US where it had been running since 1979 when six-year-old Etan Patz had gone missing in New York.

The charity hoped it would provide vital leads on the whereabouts of Patrick and David. But after four weeks the families were still in the dark as to where they had gone. 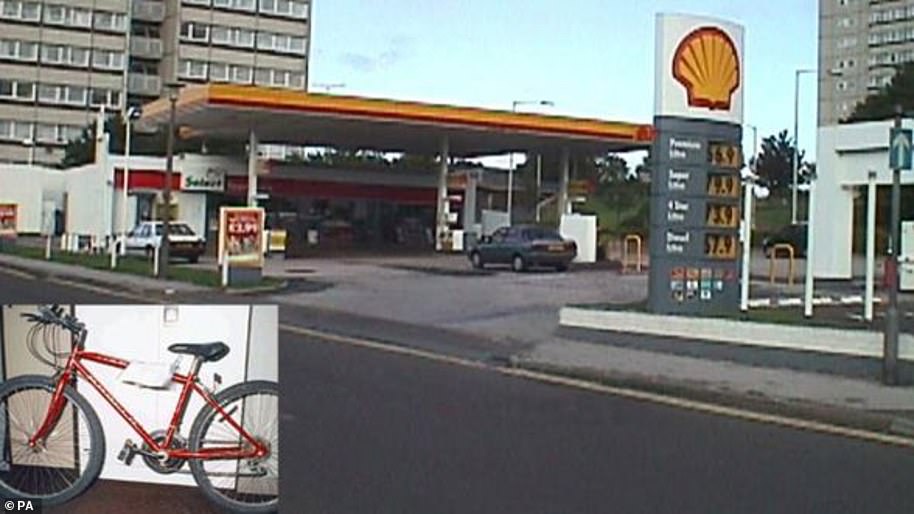 The boys were last seen just after midnight on December 27, 1997, at a Shell petrol station where the attendant gave the pair a packet of biscuits before they walked off

2006 – Ten years after their disappearance, the case was treated as a murder investigation, despite the absence of bodies.

A full forensic investigation was conducted of the boys’ houses, which revealed nothing untoward and checks were made of the sex offenders register – which did not exist when the pair went missing – to find out if any known paedophiles were living in the vicinity at around that time.

Police discovered that paedophile and convicted child killer Brian Field was living only a few miles away from Patrick and David in Solihull when they went missing.

In 1999, three years after the boys went missing, Field, a former farm labourer, was arrested for drink-driving in Chelmsley Wood.

A DNA sample taken from him matched him to the 1968 rape and murder of schoolboy Roy Tutill in Surrey. 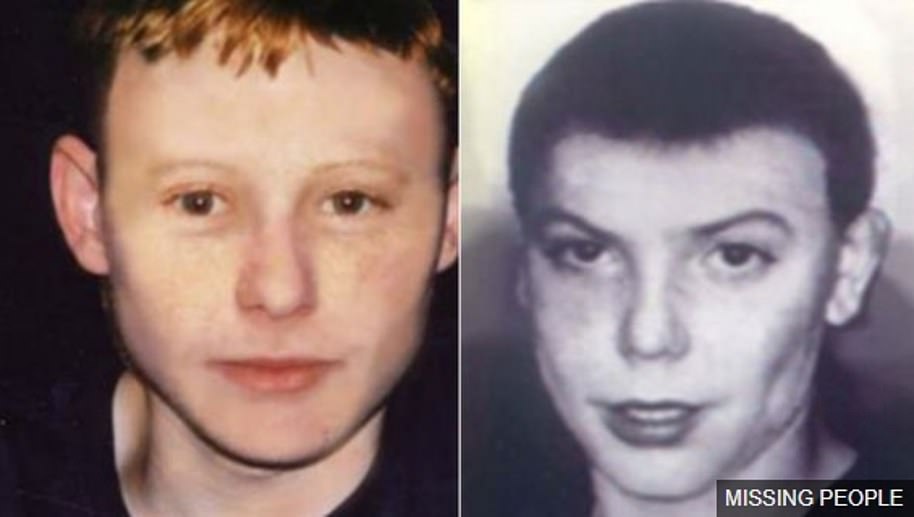 When Patrick and David’s disappearance was reviewed in 2006, Field was named as a suspect.

He was questioned by detectives and officers also dug up land he used as a dumping ground at Old Damson Lane in Solihull.

But without evidence, in the face of his denial of any knowledge of the boys, they were unable to progress the case further.

2020 – Police found human bones at a building site just three miles from the spot where the boys vanished.

They dashed hopes by revealing that the remains pre-dated 1996.

2021 – Channel 4 documentary ‘In the Footsteps of Killers’ claims child-killer Brian Field had been seen with the boys in the days before they vanished.

David’s brother Lee O’Toole, 34, who was nine when his sibling disappeared, is now leading a dig on land off Damson Wood Lane, near Solihull Moors FC, after organisers say they received ‘credible’ new information following the TV programme.