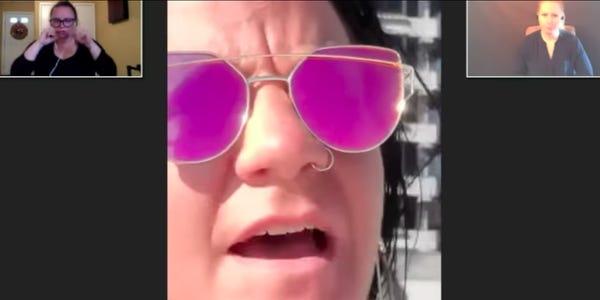 A George Washington University professor who on Thursday admitted to pretending to be Black had previously admonished the New York Police Department for targeting "our" people at Black Lives Matter protests.

In a Medium blog post, Jessica Krug revealed that she had spent her career claiming to be of North African and Caribbean descent from the Bronx in New York City, even though she is in fact a white woman from the Kansas City area.

But appearing via video link on June 9, 2020, at a New York City Council hearing about police brutality, a woman calling herself Jess La Bombalera attacked the NYPD and the council in three-minute tirade, expressing support for her "Black and brown siblings."

A number of activists on Twitter have said that Jess La Bombalera is Krug's activist name. Krug also uses the moniker on her PayPal account, according to Daily Beast reporter Will Bredderman.

In the video, Krug attacked the council for supporting the NYPD, despite what she said was widespread evidence of racially-motivated violence at protests demanding justice for George Floyd.

Krug referred to a Black person killed by police in Harlem as "one of our own."

"You gotta defund the NYPD, abolish it, the police are a colonial occupation force," she said. "If this city is for us the NYPD can't stay."

She then slammed white protesters who were also giving testimony via video link for not giving up their platform to Black protesters.

"I also wanna call out all these white New Yorkers who waited for hours with us to be able to speak, and then did not yield their time to Black and brown indigenous New Yorkers," she said.

At the time the New Yorker reported that after Krug made the complaint, "a few of the white participants gave up their place in line."

In the blog post where she admitted to assuming Black heritage, Krug said: "To an escalating degree over my adult life I have eschewed my lived experience as a white Jewish child in suburban Kansas City under various assumed identities within a Blackness that I had no right to claim: first North African Blackness, then US rooted Blackness, then Caribbean rooted Bronx Blackness."

According to George Washington University, Krug is an associate professor who teaches "politics, ideas, and cultural practices in Africa and the African Diaspora, with a particular interest in West Central Africa and maroon societies in the early modern period and Black transnational cultural studies."

A spokesperson for GWU told Insider's Rachel Greenspan that it is "looking into the situation."

The author Hari Ziyad tweeted a link to Krug's blog post on Thursday writing: "Jess Krug … is someone I called a friend up until this morning when she gave me a call admitting to everything written here."