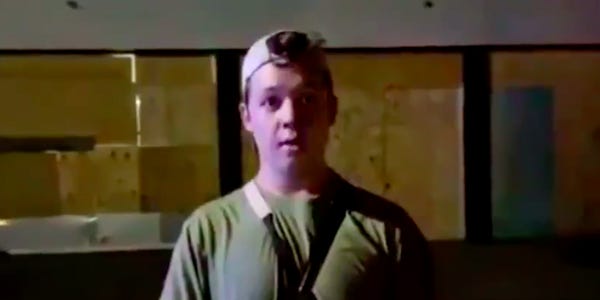 Kyle Rittenhouse, the 17-year-old accused of gunning down two protesters in Kenosha, Wisconsin, reportedly said before Tuesday's crime that he was on the scene to "help people."

"People are getting injured and our job is to protect this business and part of my job is to also help people," he said in a video that was filmed by Richie McGinniss, the Daily Caller's chief video director. It was shared on Twitter and has been viewed over 1.4 million times as of Friday morning.

"If there's somebody hurt, I'm running into harm's way," Rittenhouse added, standing in front of a boarded up business that McGinniss said was torched the previous night.

Rittenhouse told McGinniss that he was carrying his AR-15-style rifle because "I gotta protect myself, obviously." But he also showed McGinniss his "med kit."

Watch the video below.

This story is developing. Check back for updates.