Victoria has recorded no new local cases of coronavirus for the eighth consecutive day and one new case in hotel quarantine, after staff in the state’s hotel quarantine system were told international flights could resume next weekend.

With the new case reported in hotel quarantine, active cases in Victoria rose to six. There were 14,814 test results returned across the state on Friday.

According to the Department of Health, there were a total of 98 people in hotel quarantine on Friday, including 91 airline crew members, three overseas returned travellers, two frontline workers and two community members. 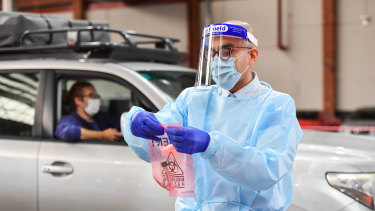 Coronavirus testing sites, like this one in South Melbourne photographed on Thursday, have remained busy with tens of thousands of tests completed across Victoria this week. Credit:Joe Armao

Two sources at Healthcare Australia, the under-fire company that provides medical services at nine quarantine hotels, told The Age and Sydney Morning Herald staff had been told flights would probably resume on March 13.

Internal correspondence from senior Healthcare Australia staff, seen by The Age, confirms operational changes are being made to accommodate flights.

Passenger flights into Victoria were cancelled from February 14, when the state was plunged into a five-day lockdown due to the Holiday Inn cluster.

Prime Minister Scott Morrison confirmed that he told Premier Daniel Andrews during discussions on Friday that the lack of international flights into Victoria was an unfair burden on other states.

“We have regularly made that request and the Premier advised me today he hopes to soon be able to provide a response to that,” Mr Morrison told reporters on Friday.

“So we look forward to Victoria resuming that as soon as possible, because that will obviously add to the ability to bring Australians home. The second-highest number of Australians on that list are from Victoria, over 10,000 Victorians are wanting to come home.”

The Howard Springs quarantine centre near Darwin in the Northern Territory will more than double its capacity to house returning travellers over the coming months, expanding to 2000 returned Australians a fortnight, up from 850 by late April.

There were 2262 Victorians inoculated against COVID-19 on Thursday, according to the Department of Health. More than 10,000 people have been vaccinated within the state since the program started on February 22.

“The first doses of the AstraZeneca vaccine have started to arrive at Victoria’s hospital vaccination hubs, with 50,800 doses provided by the Commonwealth initially,” the health department said on Friday.

“As part of a staged approach, Victorian health services will start administering this safe, effective and free vaccine from the beginning of next week.”