Victoria has now gone 20 consecutive days without a new coronavirus case, as South Australian residents wake up to their first day of a harsh six-day lockdown aimed at stemming a growing outbreak in Adelaide's northern suburbs.

The 20th "doughnut day" for Victoria comes after 17,161tests that were carried out on Wednesday, the third day of testing numbers above 17,000.

If Victoria records another eight days of zero new cases, the virus will be presumed to have been eradicated in the community according to Dean of Health at Swinburne University, Dr Bruce Thompson. 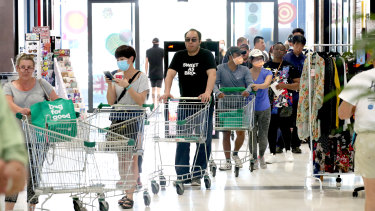 People queuing at Woolworths at West Torrens in Adelaide on Wednesday.Credit:Getty

"I think everyone is surprised by how good it is," he told radio station 3AW. "For us to eradicate it would be absolutely amazing."

In measures tougher than those imposed during Victoria's second coronavirus lockdown, South Australians are now restricted from leaving their homes and banned from all outdoor exercise until next Tuesday. Only one person per household is allowed to undertake essential activities such as shopping each day.

South Australia's outbreak – seeded, like Victoria's second wave, at a quarantine hotel – grew by two cases to a total of 22 on Wednesday, with seven suspected cases awaiting test results and more than 4000 close contacts in quarantine or self-isolation.

South Australian authorities said the unprecedented lockdown measures were designed to be a "circuit-breaker" to halt any major spread of the virus.

But Dr Thompson said he believed six days may not be long enough to be effective, as COVID-19 could take as long as 14 days to incubate in a person's body.

"I think it's slightly on the short side to be perfectly honest," he said.

"If you’re only aiming for one incubation period you’re losing your margin for error."

Dr Thompson said while it was encouraging that South Australia was taking lessons from how Victoria's deadly second wave unfolded, he questioned the need for the entire state to be locked down as all cases had so far been isolated to metropolitan Adelaide.

"I would probably suggest they’re being extremely harsh by doing that," he said.

Two flights from Adelaide and Mt Gambier are due to arrive in Melbourne on Thursday, with all passengers to be health screened.

Those from metropolitan Adelaide will be required to undergo a COVID-19 test and isolate until their results are returned, while regional South Australians are free to enter the state without a test if they have no symptoms.

Truck drivers entering Victoria from South Australia on the Western Highway are being tested at Nhill, 60 kilometres east of the border.

Drivers will be able to continue their journey after their fast-tracked results are sent to them, according to the Victorian Health Department.

There is no mandatory health screening for any other residents driving across the land border into Victoria, but the Victorian government has urged South Australians to cancel all non-essential travel.

"Most of the traffic across the border is border communities … [so] we put resources where there is the greatest risk," Deputy Chief Health Officer Allen Cheng said on Wednesday.

Premier Daniel Andrews said truck drivers who refused a test would be turned around, and anyone refusing a test arriving by air would be required to quarantine for 14 days.

"There is no reason to refuse a test," he said.

Presuming Victoria's run of zero cases continues, Mr Andrews will announce a further relaxation of coronavirus restrictions on Sunday. Victorians are expected to be allowed to have 10 people in their homes, up to 50 people may be allowed to gather in public and hospitality venues could be able to host 100 customers indoors and 200 outdoors.

Mr Andrews has also flagged that Victorians may no longer have to wear face masks outdoors where people are socially distanced from others.

Catch all the day’s headlines

At the end of each day, we’ll send you the most important breaking news headlines, evening entertainment ideas and a long read to enjoy.  Sign up here.