A chaotic video has emerged of Vancouver police officers being called pigs and “f—–g racists” by an angry crowd while they were detaining a Black man who reportedly was resisting arrest.

The incident unfolded Friday night in the city’s English Bay neighborhood after police arrived to break up a brawl that involved around 10 people, according to CTV News.

“The officers tried to disperse the crowd, but one of the aggressors refused to leave,” Vancouver Police Department spokesperson Steve Addison told the station. 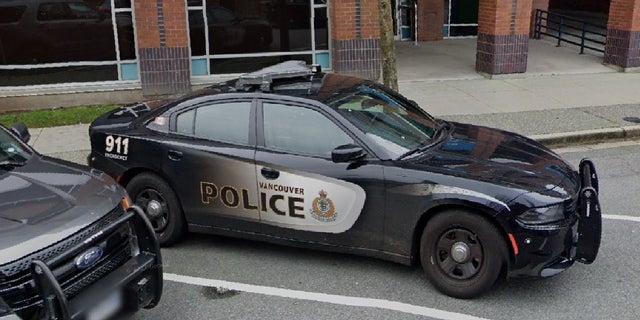 Police in Vancouver, B.C., were seen being called ‘racists’ in a video of officers arresting a Black man. (Google Maps)

“What happened… was the direct result of this man’s assaultive behavior towards police and the public. It had nothing to do with race, and it is irresponsible to suggest otherwise,” Addison continued. “He became hostile, began causing a disturbance, assaulted at least one of our officers, and resisted arrest.”

A video purportedly capturing that man’s arrest begins with two officers holding his arms, with his hands restrained behind his back.

“Tell me what I’m getting arrested for, f—-t!” the man says to the male officer, while engaging in a physical struggle. “I didn’t do nothing. I didn’t do s—!”

Another man in a white shirt who is filming the scene up close with his phone then starts repeatedly asking the male officer to say his name. The officer is seen pushing that individual away before drawing his baton. A voice could be heard screaming at the crowd to back up.

As the restrained man continues to struggle with both officers, voices are heard yelling “shoot me! Shoot me! Use your gun too b—-!” and “f— you pig, motherf—–!”

The man in the white shirt is then seen getting increasingly agitated, shrieking at the male officer to reveal his name.

A third officer then comes jogging into the frame and immediately grabs the Black man before dragging him to the ground, drawing further screams from the enraged crowd.

That officer also grabs and tosses away the phone belonging to the man in the white shirt – who at one point appears to gesture as if he was going to punch the officer. Another bystander then pulls that individual away.

As the restrained man is seen being held to the ground, the crowd starts yelling at the cops, calling them “f—–g racists.”

More officers then arrive and order the crowd back before the Black man is seen being led away.

Addison identified the man to CTV News as being from North Vancouver and says he is expected to face charges.