In December 2017, Victoria's corruption watchdog IBAC published a damning report outlining deficiencies with regional rail operator V/Line's policies and procedures. It found that between 2013 and 2016 a group of senior V/Line staff had put friendships ahead of the company's own policies when hiring staff and carrying out procurements.

A year later, V/Line responded with its own report revealing that it had purged the organisation of all those who had acted improperly and had put in place a range of new policies to stamp out the corrupt practices, including hiring a general manager of integrity to ensure that these issues did not arise again. V/Line's report was signed off by its then chief executive, James Pinder, who had been hired in late 2016 to help clean up the organisation. 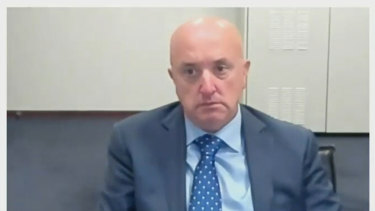 This week, the same James Pinder found himself fronting a new IBAC investigation into allegations of corrupt conduct during the tendering, procurement and subsequent management of major contracts within V/Line and Metro.

The man who oversaw the supposed clean-up of V/Line from the previous IBAC inquiry was now having to explain how he pocketed $320,000 from a cleaning contractor several months after he awarded the company, Transclean, a contract worth up to $40 million. Covert photos showed Mr Pinder allegedly receiving $10,000 in cash from the head of Transclean, George Haritos, near a Williamstown cafe just two months ago.

Mr Pinder explained it by saying that some of the money was a loan he had used to help pay for a $2.3 million home in Williamstown, and the rest was dividends from a gambling syndicate run by himself, Mr Haritos and Metro Trains operational fleet manager Peter Bollas.

That story was soon contradicted by Mr Bollas, who also fronted the IBAC inquiry, where he admitted to being paid monthly cash payments from Transclean, which also had contracts with Metro, in return for covering up their deficiencies and providing them with confidential information. Mr Bollas said he had no knowledge of the gambling syndicate mentioned by Mr Pinder.

When the Transclean boss, Mr Haritos, fronted the inquiry on Thursday afternoon, his account matched Mr Pinders. He said he had been in several betting syndicates with the V/Line chief in which money was paid out. But he has yet to be questioned on whether he had handed over money to Mr Pinder and Mr Bollas to help keep his contracts with V/Line and Metro. He will front the inquiry again on Friday morning.

While there is some way to go in the inquiry, on Thursday V/Line sacked its already suspended chief executive, Mr Pinder, and terminated its contract with Transclean. Metro also appears to have some work ahead of it after Mr Bollas, one of its most senior managers, admitted to being paid in cash by Transclean to assist in keeping its contract.

Until IBAC completes its inquiry and makes its judgments, it will be unclear how widespread corruption might be in our public transport system. But Victorians should be grateful that we have a body such as IBAC with the resources and legal framework to thoroughly investigate these matters and bring them so dramatically to public attention. The internal integrity mechanisms of V/Line and Metro could not have done this on their own.

It's yet another example that we do not see what is lurking under the rocks until we start turning them over. While the Morrison government continues to show no interest in empowering a national anti-corruption commission to start looking for wrongdoing, we will not know what is going undiscovered in the federal sphere.