Washington: The birthrate in America fell by 4 per cent last year, marking the biggest annual decrease in almost half a century – suggesting the coronavirus pandemic has accelerated an already existing trend.

New provisional data released Wednesday by the Centres for Disease Control and Prevention shows the birthrate in 2020 dropped for the sixth-consecutive year to its lowest point since US government began tracking it. 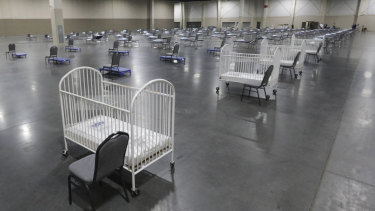 Cots and cribs are arranged at the Mountain America Expo Centre in Sandy, Utah, as an alternate care site or for hospital overflow amid the COVID-19 pandemic. Credit:AP

The birthrate fell across races and ethnicity and almost all age groups.

For years, American women have increasingly postponed having children and had fewer when they do. That led to declining births among young women and increasing rates among women in their late 30s and 40s.

But in 2020, even older mothers saw declines in births.

While some jokingly predicted a baby boom when the pandemic first struck – as couples were stuck at home in isolation – many experts suggested the reverse might happen as anxiety about coronavirus, massive job loss and the disruption to society caused Americans to postpone or think twice about having a child amid the chaos. 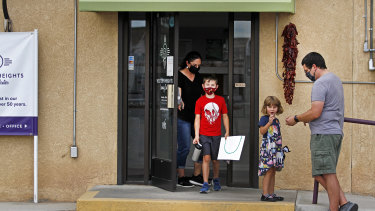 Children leave a learning centre in Albuquerque. New Mexico researchers warned there may be fewer people in the state in the coming decade, with a drop in births that will continue to reduce school enrolment. Credit:AP

The falling birthrate combined with the sharp increase in deaths caused by the pandemic, could cause a marked ageing of the country’s population if the decline continues to bear out in subsequent years, experts say.

By contrast, the birthrate for women ages 40 to 44 had risen almost continuously since 1985 by an average of 3 per cent as Americans increasingly chose to have children later in life. But for the first time last year, that trend stopped, with the births among that age group not changing.

Beyond anxiety about the pandemic, a multitude of factors are likely at play.

Research has shown birth declines strongly tied to economic crises. The current continuous drop, for example, can be traced back to the 2008 Great Recession. But even as the economy has improved in recent years, the birthrate continued to drop. And the pandemic appears to have only accelerated that decline.

Several surveys conducted during the pandemic have suggested a decline in the sex lives of Americans, with the coronavirus seeming to dramatically change sexual behaviour, as it has in almost every facet of society.

One survey found that declines in intercourse especially among couples stuck at home with school-age children. The decline in sex also correlated with symptoms of depression and loneliness.

At the beginning of the US pandemic, women in some parts of the country were not allowed to give birth with a loved one by their side and little was known about how coronavirus affected pregnant women and their babies.

For the past decade, experts have pointed to the falling birthrates as one piece of a larger shift in the country’s demographics that has led to overall declines in population growth.

Deaths have been rising as Americans from the baby boomer generation and older get closer to end of life. The number of immigrants has declined in recent years.

That will carry ramifications in coming decades on everything from the ageing workforce, increased pressures on the health care system and the changing political clout of different age groups.