The ruler of Turkmenistan has unveiled a 50ft golden statue of his favourite dog breed in the country’s capital.

Gurbanguly Berdymukhamedov, who has ruled the Middle Eastern country since 2007, revealed the statue of the Turkmen Alabi dog at a ceremony on Wednesday.

The statue sits at the centre of a roundabout in a newly-built area of Ashgabat, the capital, and features a plinth covered in TV screens that play videos of the dog.

Berdymukhamedov has a long-running love affair with the breed, which is native to Turkmenistan and which he considers part of the country’s national character. 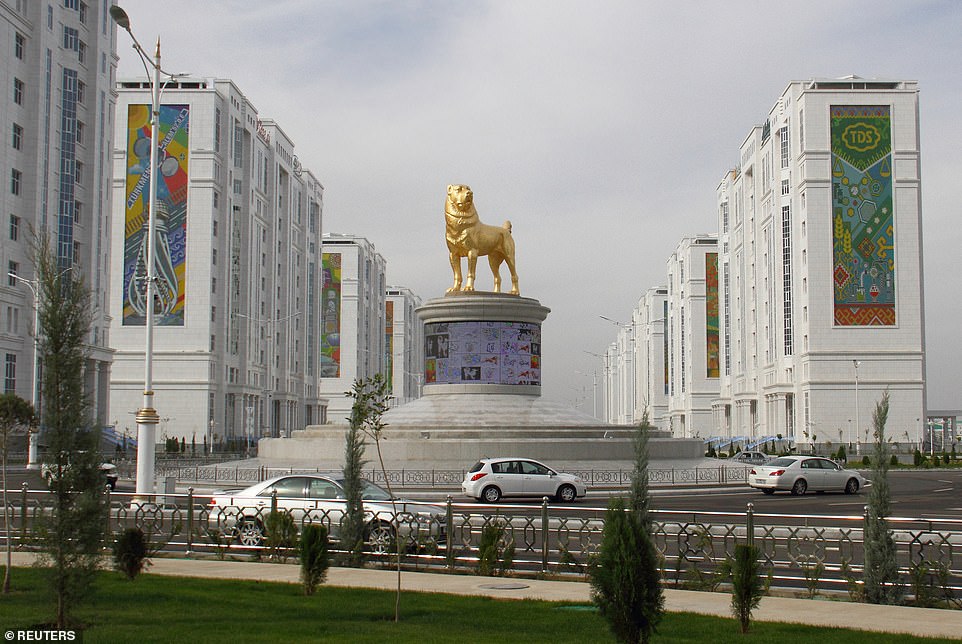 Gurbanguly Berdymukhamedov, the ruler of Turkmenistan, has unveiled a 50ft golden statue of his favourite dog breed – the Turkmen Alabi – in a ceremony in Ashgabat, the country’s capital 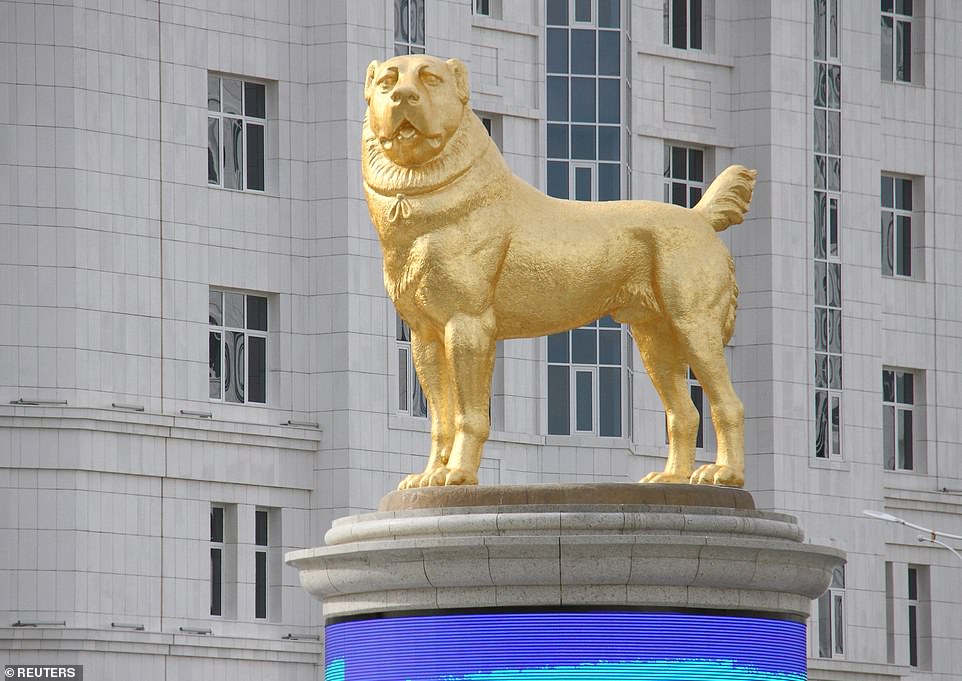 Berdymukhamedov has a long-running love-affair with the Alabi, having written a book and a poem about the dog, calling it ‘a symbol of achievement and victory’ and a part of the nation’s character 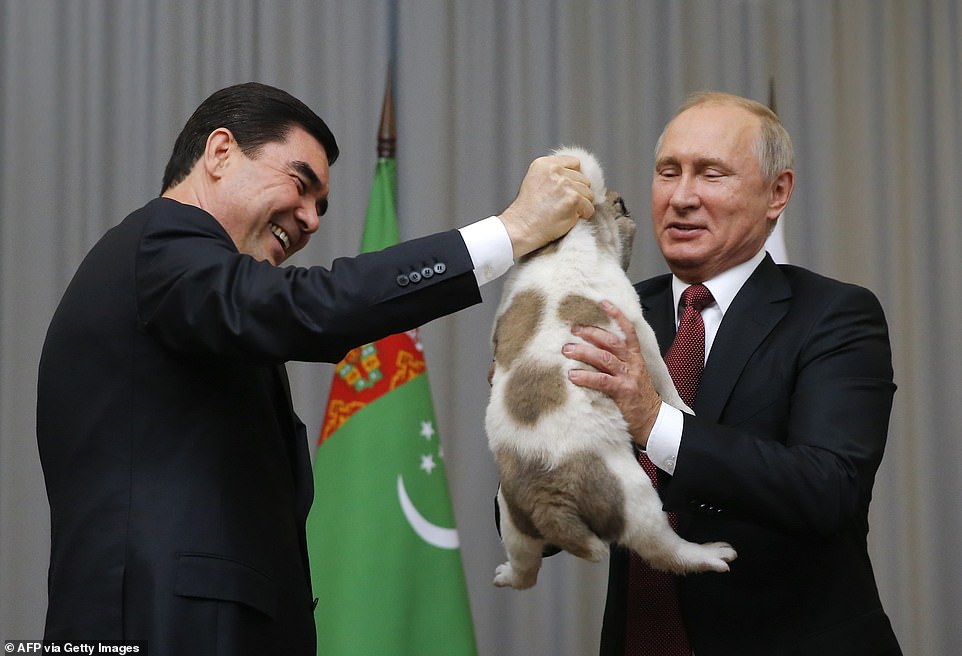 Berdymukhamedov has dedicated books and poems to the dog breed, describing it as ‘a symbol of achievement and victory’, and once gifted an Alabi puppy to Vladimir Putin (pictured in 2017)

He has dedicated books and poems to the dog breed, describing it as ‘a symbol of achievement and victory’, and once gifted an Alabi puppy to Vladimir Putin.

The statue itself is cast of bronze and stands at 20ft tall, and is covered in 24ct gold leaf. The podium measures 30ft for a total height of 50ft, according to the Turkmenistan government.

The dog sits at the center of a new area of Ashgabat, designed and built to house civil servants.

Despite the lavish ceremony, most of Turkmenistan’s population is impoverished and badly repressed.

The country is ranked lowest in the world for press freedom according to RSF, below even North Korea.

The country’s economy is growing, thanks largely to huge deposits of oil and natural gas, but most of the wealth is concentrated at the top of society.

A press release by the Turkmenistan government described the statue as demonstrating the ‘respect and honor to the exemplary courage and cordial heart of these wonderful animals.’

The statue will ‘highlight their role in historical destiny of the nation and the place which Alabis occupy in the life of the nation,’ the press release added.

Berdymukhamedov’s obsession with the Alabai is not just personal. 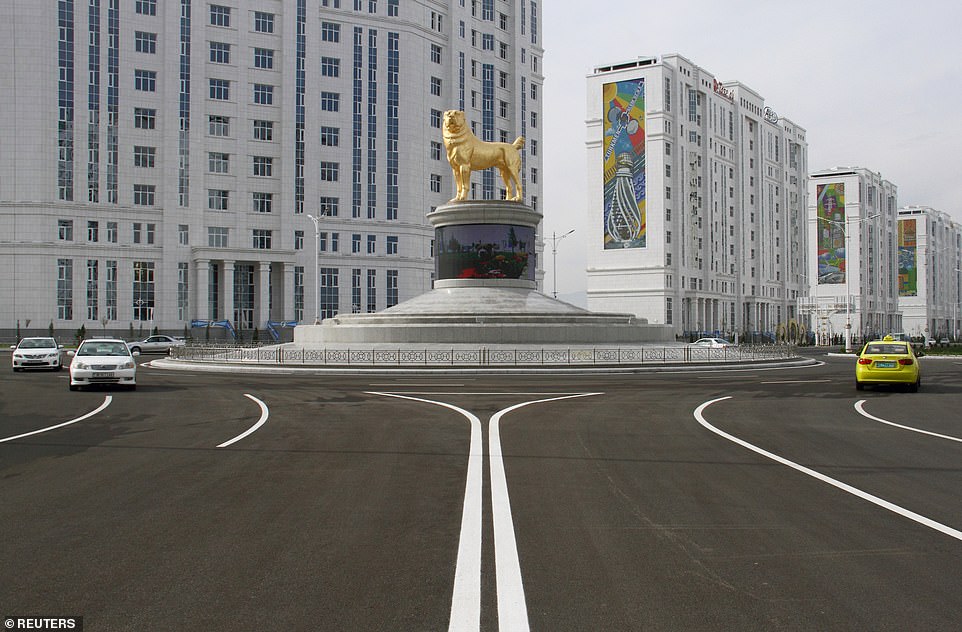 The statue itself is 20ft tall and sits on a 30ft plinth at the centre of a roundabout, which is covered in TV screens that play videos of the dog 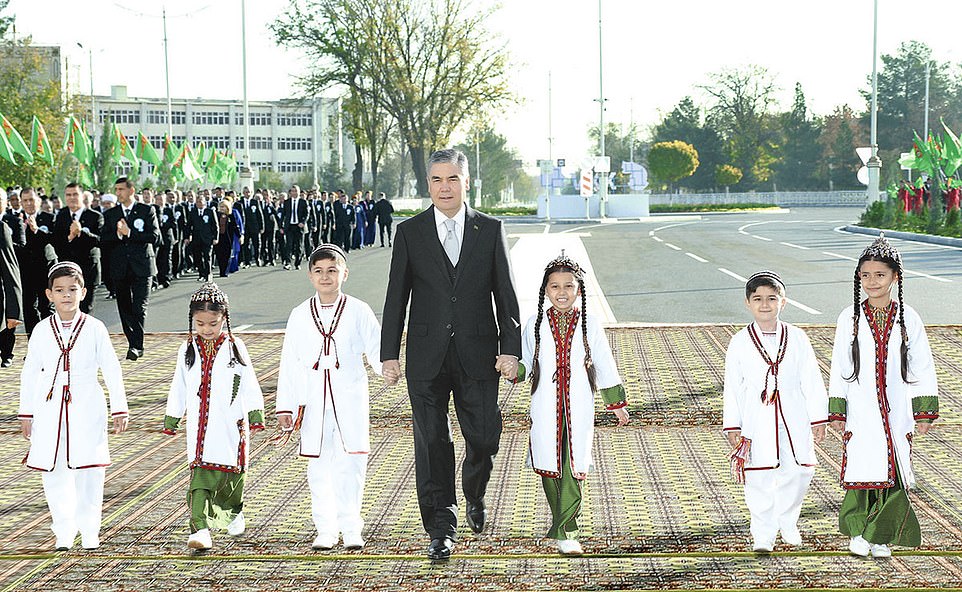 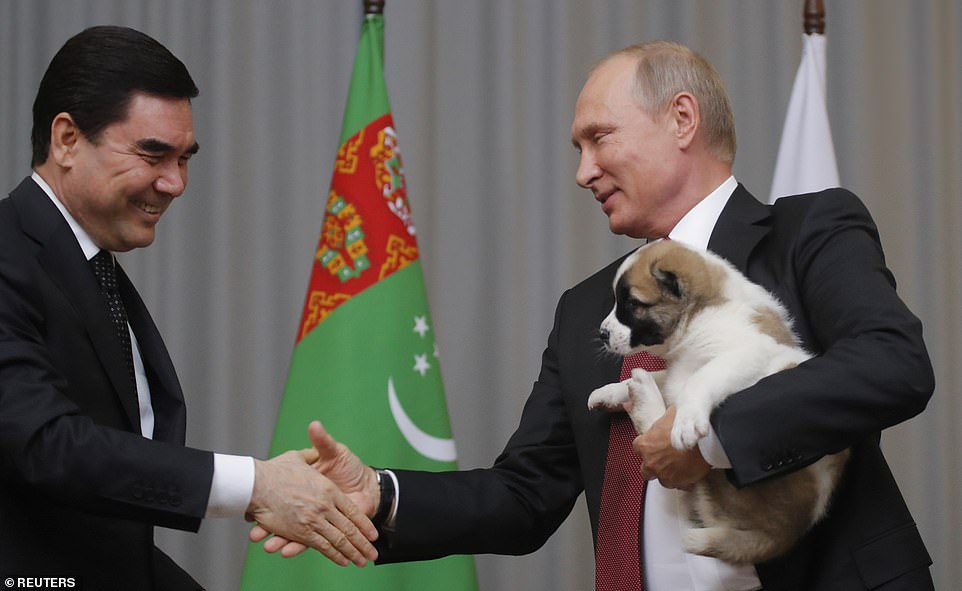 Berdymukhamedov has written a book and a poem about the dog, and once gifted a puppy to Vladimir Putin (pictured)

The barrel-chested, large-skulled dog has been at the side of nomads in the Central-Asian nation for as long as it has existed.

Historian Victoria Clement, author of the book Learning to Become Turkmen, said the breed serves to foster a sense of national pride.

“It assists the state in solidifying the idea of the territory of Turkmenistan as firmly Turkmen,” she told France 24 last year.

The new statue is just the latest opulent monument erected at the behest of the nation’s dictators.

In 2015, Berdymukhamedov unveiled a gold statue of himself in the capital riding a horse atop a cliff of white marble.

And the former dictator, Saparmurat Niyazov, erected a golden statue of himself which would rotate so that it always faced the sun, placing it atop a 246ft-tall tripod.

The capital, Ashgabat, has been described as Pyongyang meets Las Vegas.

The economy of Turkmenistan benefits from huge reserves of oil and natural gas but it’s been called one of the most oppressive nations on Earth.

Freedom House lists Turkmenistan as the fourth least-free country in the world, behind only South Sudan, Eritrea and Syria.