Cafe owner David Enaty says he doesn’t usually get too stressed, but as the stage four lockdown has progressed, his anxiety has risen.

He is fearful of a possible extension to stage four, with turnover at his usually thriving business, Scintilla Cafe in Burgundy Street, Heidelberg, already down 60 per cent on pre-COVID-19 levels. 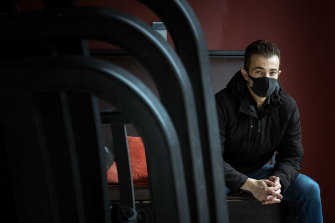 During the pandemic, his landlord is yet to demand rent, but that discussion is looming.

"I’m lucky I had a bit of money in the business account and I was never running behind in bills, or in arrears with my suppliers – that’s the only thing that’s really saved me," Mr Enaty said.

"But if we stay in stage four much longer, it’s going to get harder and harder."

Mr Enaty is not surprised at new data that shows consumers’ spending at cafes in Victoria is down 42 per cent compared to before the pandemic.

By contrast, in NSW, where restrictions have eased, cafe spending is up 18 per cent, according to the research covering August 17-23 by data analytics firm AlphaBeta and credit bureau illion.

Spending across Australia is down 5 per cent on normal levels, which the report says is largely due to the situation in Victoria.

AlphaBeta director Dr Andrew Charlton said: "It’s clear that the Victoria lockdown is having a psychological spending impact across Australia.

"Confidence will only get back on track once there are clear measures in place – across all governments – about how we manage to live and work with the threat of COVID going forward."

In Victoria, spending on fashion and leisure has dropped to 54 per cent of its normal level while in NSW, it is up 25 per cent. Spending on Victorian gyms is down 25 per cent compared with its pre-crisis level, whereas in NSW it is back to normal.

One sector that has boomed in Victoria is health services — including dentists, pharmacies and GPs — with spending up 100 per cent on normal levels.

And the online retail sector has spiked again in Victoria, up 21 per cent. NSW is down 14 per cent.

Supermarket spending has dropped to 12 per cent below normal in both Victoria and NSW, after spiking in Victoria during panic buying early in the stage four lockdown.

Mr Enaty, who has owned Scintilla Cafe for 14 years, says he lost many customers who live outside the five-kilometre travel radius dictated under stage four, and tradespeople who are out of work no longer work pop in.

"I’m a person who never stresses," Mr Enaty said. "At the moment? It’s very mentally challenging and stressful. The financial side of it, just trying to stay afloat.

"I don’t think we’re in danger of folding, but it has set me back financially a long way.

"If stage four goes on longer – I’m hearing rumours it might go on a few more weeks – it’s going to be harder. I'm not making money. I’m here 70 hours a week and I’m making nothing."