With hindsight, the revelation that the Andrews government was warned by its own Health Department at the onset of the COVID-19 crisis that its front-line defence against a pandemic was in disrepair should have triggered a multitude of alarm bells. The story of how that reality led to Victoria being nearly overwhelmed by the virus, and the enormous effort to fortify the department while battling the second wave, is one that highlights the potential clash of transparency versus trust during a crisis.

Public trust in government has been an essential ingredient in containing the virus. Without it, the ability to enforce strict restrictions to contain outbreaks can become highly contentious. As political editor Peter Hartcher wrote at the weekend, taking a global perspective, those governments that have done best in managing the virus followed effective governance, centrist politics and scientific expertise that fortified public trust. 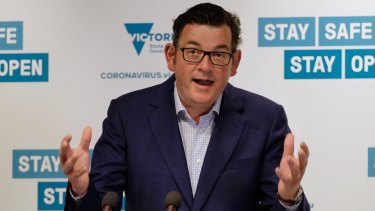 In Victoria, Premier Daniel Andrews knew he needed the public's confidence in his ability to lead the state during the pandemic. His most overt effort to build that trust was fronting up before the media day after day, offering up the latest details and subjecting himself, at times, to hostile questioning. No matter what the issue, Mr Andrews wanted to convey the message that he was aware of the problems and that his government had them in hand.

Yet behind the scenes, as Age chief reporter Chip Le Grand revealed, while the number of positive infections was exploding after the breach of hotel quarantine, the effort to contain the virus was in disarray. And despite Mr Andrews' assurances, the cracks were showing. Reports of long delays in testing and a lack of co-ordination in contact tracing became rife.

It has been reported that Mr Andrews was deeply worried, particularly with the ability of contact tracers to keep up with demand. This led the Premier to instruct Chris Eccles, who was then the head of the Department of Premier and Cabinet, to pull out all stops to fix the problem. Without a solution, the virus would never be contained.

While this was going on, Mr Andrews continued to front up to the daily briefings – he would do 120 all up – and assure the public that everything was under control. It was clearly not, and he knew full well.

During the marathon effort, Mr Andrews often publicly stated that he was less interested in politics than ever. With a fuller picture of what was taking place in the back rooms, it would seem that was no more true than ever. Mr Andrews was making the political calculation that the less the public knew of how dire the situation was the better.

As we know, the problems were fixed, and the virus has been eliminated in the community, at least for now. But the question is still worth asking: would Victorians have lost their trust in the Premier if he had been fully transparent at the time? It's a question with consequences. A loss of faith in government and its leaders, particularly during a time of crisis, can lead to dire outcomes.

But gauging the tipping point of trust is no science. With that in mind, The Age would always argue the case for truth and transparency. While conveying a message of competence is important in building public confidence for any government, if it is built on deception then it will always come with the long-term cost of a leader's credibility.