The city of Henderson had warned Xtreme Manufacturing that the Sunday event would have to comply with state orders to keep gatherings under 50 people, to require facial coverings and to practice social distancing.

"During the event, a compliance officer observed six violations of the directives and the City's Business Operations Division has issued a Business License Notice of Violation to Xtreme Manufacturing and assessed a penalty of $US3000 [$4100]," municipal spokeswoman Kathleen Richards said in an email. 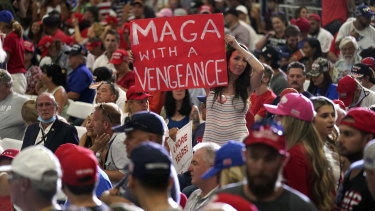 Supporters gather at the rally for US President Donald Trump Xtreme Manufacturing in Henderson, Nevada.Credit:AP

The company has 30 calendar days to pay the fine or dispute it, Richards said.

Company owner Don Ahern said at a Monday news conference that hosting the Trump event was part of his patriotic duty to support the president. He declined to comment on the fines.

"We respect everybody's position in this situation," he said.

The Sunday gathering drew thousands of Trump supporters to a warehouse. Trump on Monday defended holding the rally, telling the Las Vegas Review-Journal that he wasn't personally in any danger.

"I'm on a stage and it's very far away," Trump told the newspaper in an interview. "And so I'm not at all concerned."

He didn't mention the safety of those who attended. The campaign said every attendee got a temperature check, and it provided hand sanitiser and masks. Few wore facial coverings.

Nevada's Democratic governor, Steve Sisolak, said the president was "reckless and selfish" and had endangered his supporters.

COVID-19 has killed more than 194,000 Americans so far; 1452 have been Nevadans, according to Johns Hopkins University.