Donald Trump is looking to target China for its human rights violations in Hong Kong with a round of financial and trade-related executive orders, including banning Chinese-created social media app TikTok.

One executive order being floated by the administration would end special exceptions for Chinese businesses operating within the U.S.

Another would specifically target trade with Hong Kong as China continues to fight back against the city’s most recent push to declare autonomy and Beijing issued harsh new security rules on the region.

Secretary of State Mike Pompeo said that the administration is also ‘looking into’ banning TikTok, a popular short-video platform, amid concerns the social media app poses a threat to U.S. national security.

The app is owned and operated by Chinese technology giant ByteDance Inc., which announced Tuesday morning that it is pulling TikTok from the Google and Apple stores in Hong Kong within a week due to ‘recent developments.’

Other social media platforms and tech giants – Facebook, Google, Twitter, Zoom and others – have announced they are suspending requests for user data from Hong Kong while the new security regulations are studied. 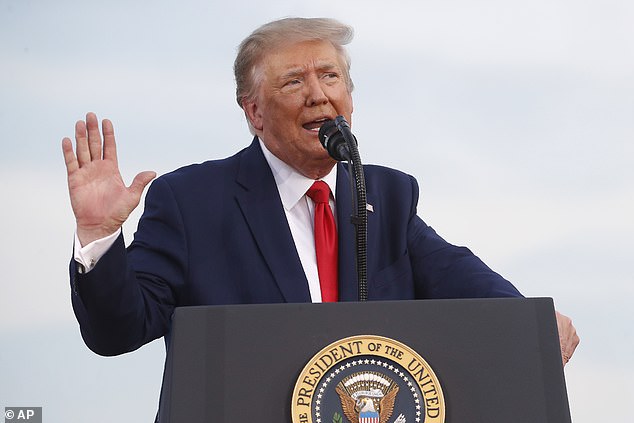 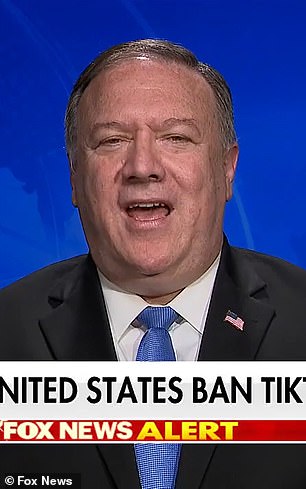 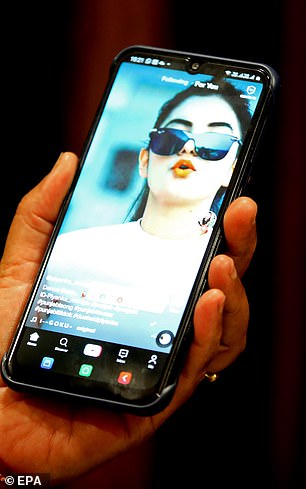 Apple said Hong Kong does not directly request user content from the tech company, instead submitting any requests through the Department of Justice under a legal assistance treaty.

‘We’re assessing the new law, which went into effect less than a week ago, and we have not received any content requests since the law went into effect,’ Apple said in a statement.

While U.S. social media platforms are usually banned in China due to Beijing’s ‘great firewall,’ they have generally operated in Hong Kong, known as a special administrative region of the People’s Republic of China, up until now – as the new rules are forcing tech giants to reevaluate.

Pompeo told Fox News’ Laura Ingram on Monday night that the Trump administration is considering the claims that TikTok collects users’ cellphone data and then shares the information directly with Beijing and is taking the matter ‘very seriously.’

Ingraham asked Pompeo about whether the U.S. should consider a ban on Chinese social media apps, ‘especially TikTok.’

‘With respect to Chinese apps on people’s cell phones, I can assure you the United States will get this one right,’ Pompeo said. ‘I don’t want to get out in front of the president, but it’s something we’re looking at.’

The top Washington diplomat warned Americans they should only download TikTok ‘if you want your private information in the hands of the Chinese Communist Party.’

Pompeo’s remarks come amid heightened tensions between the U.S. and China over the handling of the coronavirus outbreak, China’s actions in Hong Kong and a near two-year trade war. 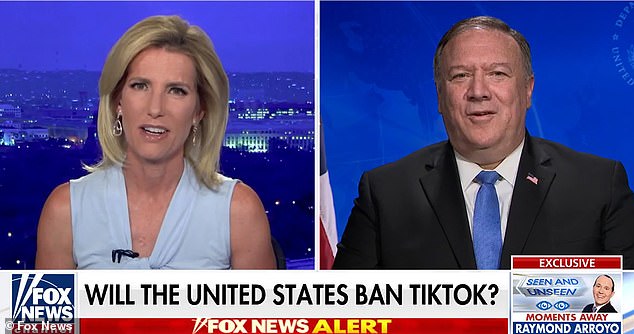 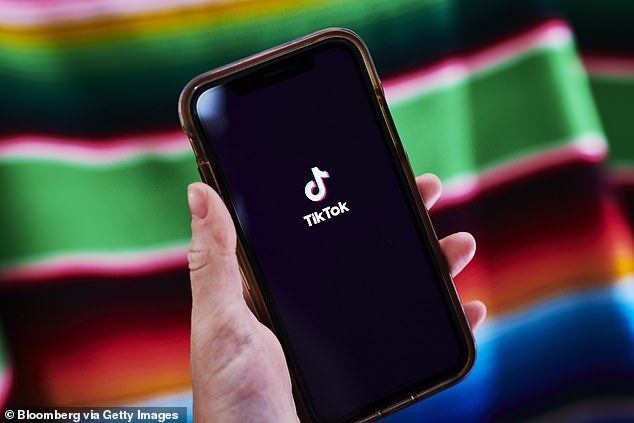 TikTok is a short-form video app owned by Beijing-based ByteDance – and the social media platform has been repeatedly criticized by U.S. politicians who say they’re worried about Chinese laws requiring domestic companies ‘to support and cooperate with intelligence work controlled by the Chinese Communist Party’

TikTok has been repeatedly criticized by U.S. politicians who say they’re worried about Chinese laws requiring domestic companies ‘to support and cooperate with intelligence work controlled by the Chinese Communist Party.’

The app, which is not available for download in China, has sought to distance itself from its Chinese roots to appeal to a global audience.

Previously, TikTok assured that it operates separately from ByteDance and claimed its data centers are located entirely outside of China – insisting none of that data is subject to Chinese law.

The app has been downloaded more than 175 million times in the U.S., and it claims American users’ data is stored on servers in the U.S. that are then backed up in Singapore.

TikTok has not yet returned a DailyMail.com request for comment on Pompeo’s remarks. A spokesperson for the company told CNN in May that it thinks the national security concerns are ‘unfounded.’

India has already banned TikTok and Australia in considering taking action against the app.

The Transportation Security Administration (TSA), Department of Homeland Security, as well as on government-issued mobile devices used by the Army and Navy have also prohibited any downloads of the app. 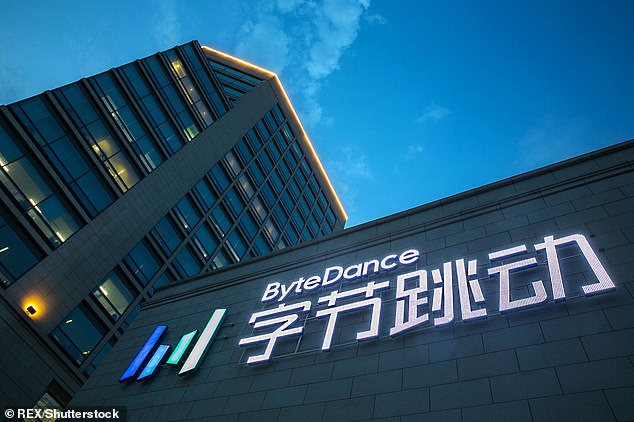 TikTok has said previously that it operates separately from ByteDance and claimed its data centers are located entirely outside of China, and that none of that data is subject to Chinese law

TSA responded to Schumer’s letter by announcing that employees will no longer use the app as part of the agency’s social media strategy.

‘TSA has never published any content to TikTok nor has it ever directed viewers to TikTok,’ the agency said in a statement.

‘A small number of TSA employees have previously used TikTok on their personal devices to create videos for use in TSA’s social media outreach, but that practice has since been discontinued.’

‘TikTok clandestinely has vacuumed up and transferred to servers in China vast quantities of private and personally-identifiable user data that can be employed to identify, profile, and track the location and activities of users in the United States now and in the future,’ the lawsuit read.

‘TikTok also has surreptitiously taken user content, such as draft videos never intended for publication, without user knowledge or consent. In short, TikTok’s lighthearted fun comes at a heavy cost.’ 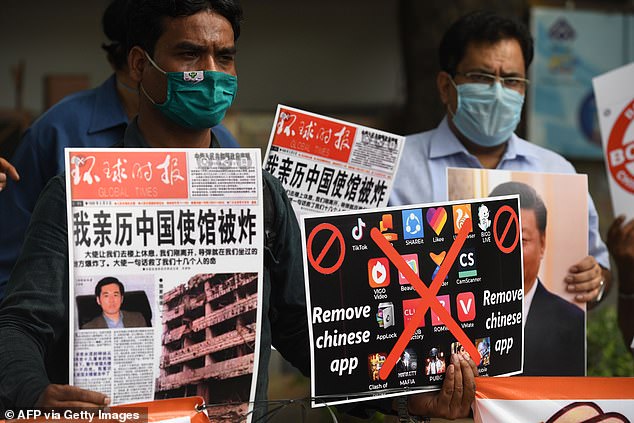 The app was also recently banned in India along with 58 other Chinese apps after a border clash between the two nations in which 20 Indian soldiers died.

The Indian government said the apps are ‘prejudicial to sovereignty and integrity of India, defense of India, security of state and public order’, the Ministry of Information Technology said.

The department added that some of the apps had also been found to be ‘stealing and surreptitiously transmitting users’ data in an unauthorized manner to servers which have locations outside India’, though failed to specify the apps allegedly responsible.

‘TikTok continues to comply with all data privacy and security requirements under Indian law and have not shared any information of our users in India with any foreign government, including the Chinese government,’ TikTok India chief Nikhil Gandhi said last month.

‘Further if we are requested to in the future we would not do so. We place the highest importance on user privacy and integrity,’ he said.

The app also censored all anti-China opinions and had the ability to feed information straight to Beijing, Mr Ryan said.

He said it was ‘no question’ the Chinese Communist Party had a hold of the data as there are members of the party within the company.

Reuters reported late on Monday that TikTok would exit the Hong Kong market within days, deciding to do so after China’s establishment of a sweeping new national security law for the semi-autonomous city.