Builders of the $16 billion North East Link project have under-estimated the scale of tree loss by as much as 80 per cent, a secret government-commissioned audit of the toll road reveals.

The misreporting of what is estimated to be hundreds of square metres of lost trees has angered locals and planning experts, who say it has made a mockery of nine weeks of public hearings designed to reduce the environmental impact of the new 26-kilometre toll road.

In 2019, the Andrews government ran an extensive process to examine the project’s ecological and social impacts, including the felling of 26,000 trees. The resulting environmental effects statement (EES) led to the creation of performance benchmarks to audit the project’s builders.

But even before the project’s major construction starts later this year, early works builders CPB Contractors have been caught bypassing the new benchmarks and misreporting the estimated scale of tree loss.

Consulting firm Nation Partners found CPB had “significantly under-estimated” the size of the tree canopy loss at Borlase Reserve in Yallambie – parkland in Melbourne’s north-east being turned into a launch site for large, tunnel-boring machines.

Builders carrying out $198 million worth of works estimated the removal of 190 square metres of tree canopy but the auditor said this was more likely to be “80 per cent greater” – about 350 square metres.

The government-commissioned audit from December last year said this was a red flag, warning that the builders were at risk of breaching two of three performance benchmarks designed to reduce tree loss.

“If this pattern extends across the project it has the potential to create a major non-compliance,” the audit warned.

Barry Watson, who lives in Doncaster near a section of the Eastern Freeway that will be widened as part of the project, obtained the audit using freedom-of-information laws.

He said it showed the builders could be razing more trees than was approved by the Planning Minister. This “made a mockery” of the environmental effects statement process, while also posing serious ecological challenges, he said. 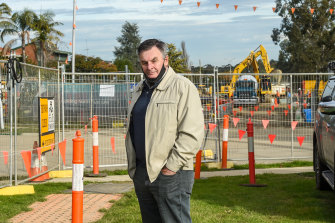 “The trees are a filtering mechanism for what we breathe and on top of that we’re supposed to be working towards cleaner emissions by 2050,” Mr Watson said.

Three councils in Melbourne’s north-east paid about half a million dollars in total for lawyers, expert witnesses and researchers needed to contribute to the planning hearings. The Andrews government would not say how much the EES cost taxpayers.

Melbourne University urban planning associate professor Crystal Legacy said the government wrongly treated the EES process – used for all major transport projects – as a “hurdle requirement” and was yet to radically reform the process in the wake of a 2017 Victorian Auditor-General probe.

The PFAS soil contamination problem on the $6.7 billion West Gate Tunnel was overlooked in the project’s EES, but this has now led to an estimated multibillion-dollar blowout, more than two years delay and the risk of serious ecological and health problems.

Professor Legacy said she was cynical about the outcomes of the upcoming EES for the most expensive transport project ever built in Victoria – the $50 billion Suburban Rail Loop.

“How will it be different from the ones that have been done in the past?” she said.

“This is the biggest building program we’ve seen in generations. There’s a lot at stake and if we don’t take a moment to learn from the past, we will suffer the consequences.”

The government is expected to announce its favoured bidder on the North East Link within about six weeks and sign contracts later this year — later than initially expected.

The government reset the tender process to assure builders they would not carry all the risk of building the complex tunnel under the Yarra and a massive widening of the Eastern Freeway.

A government spokeswoman said more than 30,000 trees would be planted to replace those that are destroyed.

“As we build the projects we promised, that support thousands of jobs – we continue to work alongside local communities either through hundreds of community consultations or planning and environment approval processes,” she said.

North East Link Project’s chief executive Duncan Elliott said the auditor’s finding related to an assessment by the builder’s arborist and while this related to a small sample size, the government was working with the contractor to resolve it.

“We want, and expect, our independent environmental auditor to be robust and we take their recommendations seriously – the independent findings in the report shows the IEA [Independent Environmental Auditor] process is working as it should.

“The report outlines that canopy loss from three trees may have been underestimated by the builder’s arborist – the matter has since been addressed with the builder.”