A toddler is left in fits of giggles after meeting two baby goats that bleat as he pets them.

Two-year-old Ray Berger was filmed meeting two kids at the farmhouse of family in Myerstown, Pennsylvania.

While being held in the arms of 25-year-old cousin Jamie Weidman, Ray pets the two goats before erupting in fits of adorable giggles every time the animals gently bleat.

Ray’s face becomes expressionless until the animals let out a tiny cry at which point he begins giggling all over again – which has all the adults in the room laughing too. 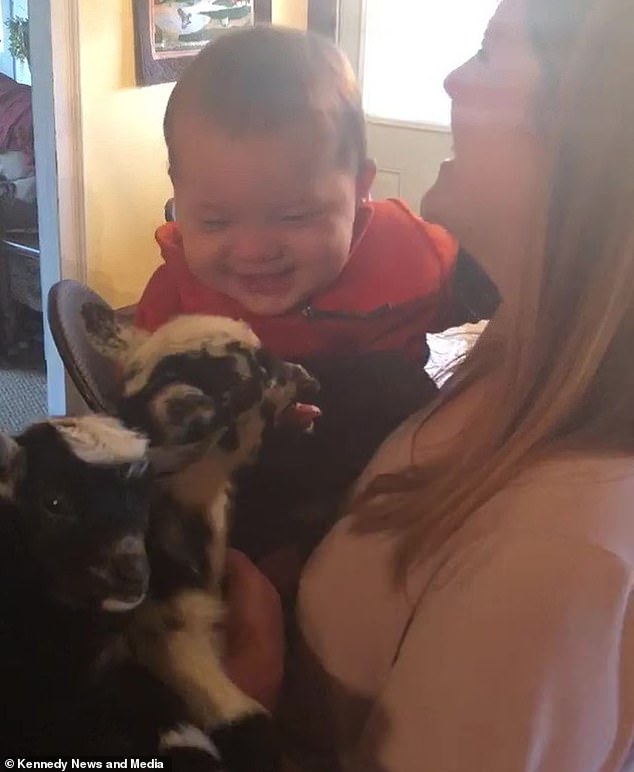 Two-year-old Ray Berger laughs hysterically as he meets two baby goats that bleat as he pets them at a relative’s farmhouse in Myerstown, Pennsylvania 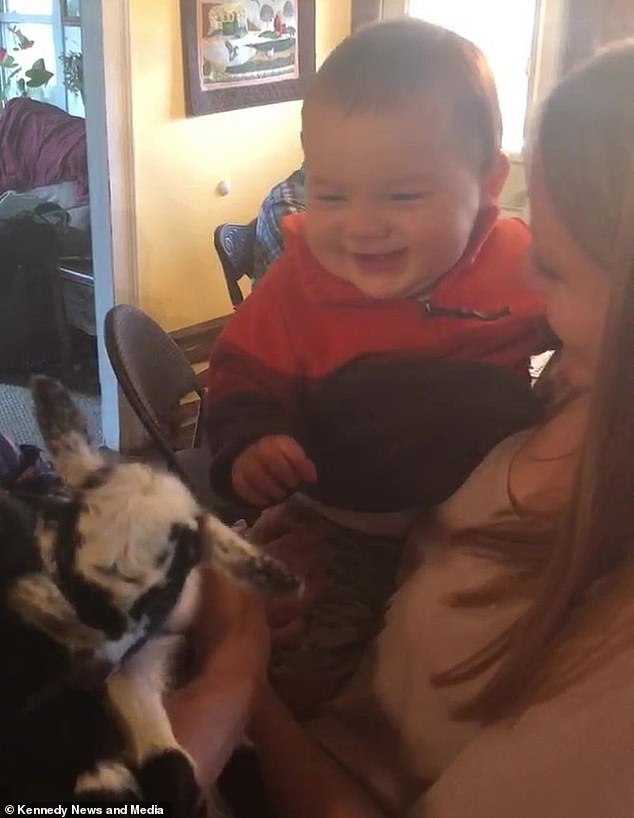 Ray’s face becomes expressionless after each fit of giggles, only for him his to burst out laughing again when the newborn goats let out another tiny cry

Ray’s mother Holly, 29, said: ‘The baby goats had just been born within the past day or so my mother-in-law Fay [Berger] brought them in to see his reaction.

‘He loves animals, I don’t know if it was the first time he had heard a goat bleat but he just got such a kick out of them.

‘That deep belly laugh is one of the most intense bouts of laughing I’ve ever seen him have.

‘He has one of the most contagious laughs, we were all just about crying from laughing so hard.’

The footage was originally filmed back in October when Holly and family physician husband Travis, 32, were visiting family out of state, but was recently shared online by Holly who wanted to raise people’s spirits during the coronavirus lockdown.

Holly, a speech therapist, said: ‘Ray had been laughing like that for close to ten straight minutes every time they bleated.

‘We have a lot of family out of state and I filmed it because he had been laughing for so long so intensely.

‘It was such a heartfelt, innocent child’s experience that animals were able to have that kind of effect on him.

‘Family and friends love the clip.’

Since being posted on Facebook, the adorable clip has been viewed more than 4.3million times and has more than 243,000 likes, shares and comments.

Holly, who is also mother to three-month-old Michael Berger, said: ‘One lady messaged me saying that one of her relatives had recently passed away and she hadn’t been able to smile or laugh.

‘She said she saw his video and that was the first time she laughed, I was almost in tears when I read that.

‘To have someone reach out saying this innocent child brought some sort of joy back to their life for just a couple of moments has really been an amazing experience.’