Tier 3 ‘will kill London’s bars and businesses’: Forcing the capital into toughest restrictions would be like slapping a ‘do not resuscitate’ order on the city’s industries, experts warn

Moving London into Tier Three would be the equivalent of slapping a ‘do not resuscitate’ order on the city’s struggling businesses, Boris Johnson was warned last night.

Coronavirus cases are rising sharply in the capital, sparking fears that it could be placed under the most severe restrictions in days.

Yesterday Sadiq Khan, the city’s mayor, pleaded with Londoners to stick to social distancing rules and the wearing of masks. 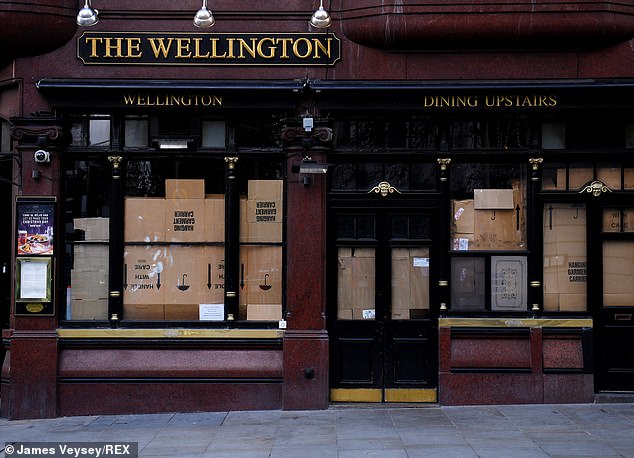 Moving London into Tier Three would be the equivalent of slapping a ‘do not resuscitate’ order on the city’s struggling businesses, Boris Johnson was warned last night

A decision on whether to move the capital into the top tier – which would see pubs and restaurants closed – will be made in the next few days and will come into force on December 16.

But last night the British Beer and Pub Association said Tier Three would be the ‘writing on the wall’ for many more of the capital’s locals.

Bell tolls for our traditional pubs

Thousands of traditional pubs risk being lost for ever because of the impact of lockdowns, according to an industry expert.

Fiona Stapley, editor of The Good Pub Guide, sounded the warning as it published its latest list.

She said this year had been a ‘nightmare’ for pubs with ‘the industry facing the darkest of moments’.

But she added that while the road ahead was ‘frighteningly rocky’, publicans were ‘plucky and extraordinary people who retain a teeny spark of hope’.

She urged drinkers to return to pubs when the rules allow. ‘It is imperative we support them – the pub… is the beating heart and focal point of countless communities,’ she said.

The guide gave its latest Pub of the Year award to the Olive Branch in Clipsham, East Midlands.

And UK Hospitality said moving London into Tier Three before Christmas could cost 150,000 jobs in pubs, restaurants and hotels.

Kate Nicholls, the trade body’s chief executive, said it would be a ‘killer blow’ to hundreds of struggling businesses in the capital.

London Chamber of Commerce and Industry told the Prime Minister that his dream of a Global Britain would not materialise ‘without London operating at full power’.

Chief executive Richard Burge urged the Government to demonstrate that they grasp that London is Britain’s world city whose economy and global reach benefits the whole of the UK.

‘If scientific evidence of transmission levels of Covid-19 in London warrant moving the capital into Tier Three then the Government must, at the same moment, significantly increase its support for London businesses,’ he said.

‘The inevitable collapse in footfall, particularly in central London, means there should be an immediate extension of the business rates holiday, and instant cash support to enterprises in retail, hospitality and leisure.

Without help, the Government will be issuing a ‘do not resuscitate’ order on companies which otherwise would be successful and thriving contributors to the most important economic asset in the country – London.’

The warning came after official figures showed Covid cases were on the rise in two-thirds of London boroughs.

The capital is now the region with the highest seven-day Covid rate per 100,000 people in England.

Mr Khan said: ‘I urge all Londoners to follow the rules – for the good of the loved ones that we want to see over the festive period and to help all our local businesses. 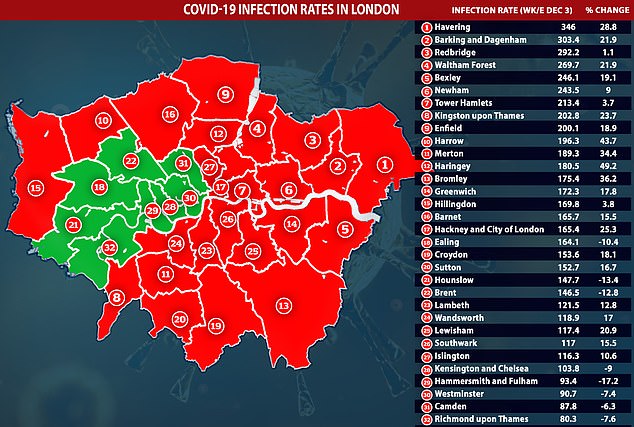 Coronavirus cases are rising sharply in the capital, sparking fears that it could be placed under the most severe restrictions in days

No one wants to see a devastating further surge in cases or the need for more restrictions.’

Emma McClarkin, of the British Beer and Pub Association, said: ‘Tier Two is already killing pubs’ ability to trade –but Tier Three would truly be the writing on the wall for many more of the capital’s locals.’

She added: ‘The Government has to stop picking on our pubs and recognise its own evidence that shows they are safe. If it won’t, then it must deliver grant support in line with that of Scotland and Wales.’