London: All social gatherings of more than six people will be banned in England, under new limits to be announced by British Prime Minister Boris Johnson on Wednesday, as coronavirus cases grow.

At a press conference, Johnson will confirm that police will have new powers to disperse and fine any group larger than six people meeting indoors or outdoors from September 14. That marks a tightening of the current rules, under which police can break up gatherings of more than 30.

There will be exceptions for people getting together for work, weddings and funerals as well as for organised sports — but parties in pubs and restaurants, and gatherings in public spaces will be hit by the new limits. 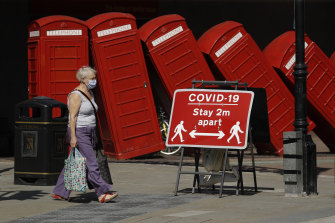 A social distancing sign is displayed in front of “Out of Order” a 1989 red phone box sculpture by British artist David Mach, in London.Credit:AP

"We need to act now to stop the virus spreading," Johnson is expected to say, according to an email from his office. "We are simplifying and strengthening the rules on social contact— making them easier to understand and for the police to enforce."

The move comes amid mounting concern in the government that COVID-19 cases are rising rapidly again, after restrictions were eased and the public was encouraged to return to work and socialise.

The UK has posted almost 6000 new cases of coronavirus over two days this week, reaching daily levels not seen since May. That's sparked concern in the government the country could follow the paths of Spain and France, where hospitalisations have begun to rise again. 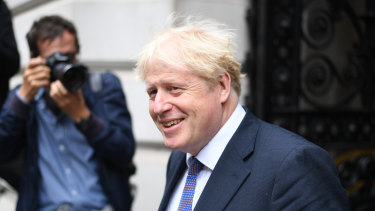 "This must be a moment of clarity for us all. This is not over," Health Secretary Matt Hancock told the House of Commons on Tuesday. "Just because we've been through one peak it doesn't mean we can't see another one coming towards our shores."

Hancock said the government would be tightening enforcement of pandemic rules and stepping up communication on social distancing. He also gave an indication of what areas facing a surge in cases can expect, announcing new restrictions in the northern town of Bolton including shorter opening hours for pubs.

Johnson warned against complacency, telling his cabinet other countries have recorded increased infections among young people who "had gone on to infect older generations, who had become seriously ill, and it was vital to ensure that did not happen here," his spokesman, James Slack, told said. "The PM wants no complacency from the public."

Hancock took up the theme, saying that evidence from Bolton had shown an increase in infection rates in the young — who could then infect their parents and grandparents. 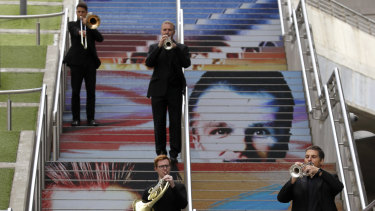 Musicians with the Royal Philharmonic Orchestra play on the Spanish Steps at Wembley Park in London on Saturday.Credit:AP

Johnson is seeking at all costs to avoid a second national lockdown after the first one, which began in March, plunged the economy into its deepest recession in at least a century and pushed the national debt above £2 trillion ($3.5 trillion) for the first time.

Slack said the government would "not hesitate" to take further steps to contain the virus, though he declined to comment on specific measures.

Even with the rise in cases, the government was still trying to encourage people back to what ministers describe as “COVID-secure” workplaces to help the economy to rebound. But central to that strategy is the testing program, which is also coming under pressure just as it's needed to get on top of local outbreaks.

Sarah-Jane Marsh, director of testing at NHS Test and Trace, apologised on Tuesday for the fact people were struggling to get tested, blaming a bottleneck at laboratories.

"All of our testing sites have capacity, which is why they don't look overcrowded, it's our laboratory processing that is the critical pinch-point," she said on Twitter. "We are doing all we can to expand quickly."

The issue of testing has dogged the response since the early days of the pandemic, when a lack of capacity forced the government to halt community tests — a decision officials have since said contributed to the UK suffering the worst death toll in Europe from COVID-19.

Despite building up capability over the summer, availability of tests is still having an impact across government departments. Transport Secretary Grant Shapps acknowledged in the House of Commons on Monday that a shortage meant officials could't use testing to shorten quarantine requirements — a key demand from the travel industry to tackle a slump in demand.

"Pressure on testing is very real," Shapps told MPs. "I'm not sure we should be prioritising holiday-makers returning to the testing system over, for example, children going back to school. The simple solution is of course to create more testing."

Jonathan Van Tam, England's deputy chief medical officer, urged the public to refocus on efforts to stop the spread of the virus to prevent "a bumpy ride over the next few months."

The seven-day rate of new cases in the UK has risen to 21.3 per 100,000 people, he said, just over the threshold of 20 cases per 100,000 the government uses to help assess whether to impose quarantine rules for other countries.

Van Tam also said that while the hospitalisation and death rates remained comparatively low, the experience of other countries shows infections among young people were likely to filter through to older generations, who are more at risk.

"People have relaxed too much, now is the time for us to re-engage, and to realise that this a continuing threat to us," he told broadcasters. "The fact that 17 to 21-year-olds are not becoming ill means they are lucky, but they also forget — because the disease is not severe for them — that they are potent spreaders."

Our weekly newsletter will deliver expert analysis of the race to the White House from our US correspondent Matthew Knott. Sign up for the Herald‘s newsletter here, The Age‘s here, Brisbane Times‘ here and WAtoday‘s here.