London: Spacing out the two doses of the Pfizer COVID vaccine by eight to 10 weeks boosts immunity more effectively than a shorter interval of the two-shot regimen.

But the Oxford University study published on Friday found there is a sharp drop in antibody levels after the first dose.

“For the longer dosing interval … neutralising antibody levels against the Delta variant were poorly induced after a single dose, and not maintained during the interval before the second dose,” the authors of the study said. 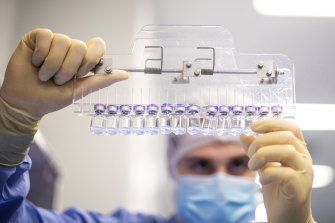 The antibodies generated by the first dose of the Pfizer vaccine decline rapidly, the study found. Credit:Pfizer

“Eight weeks is probably the sweet spot,” in terms of the trade-off between getting as many people fully vaccinated as quickly as possible and allowing the population to produce higher antibody levels, Professor Susanna Dunachie, the study lead from the University of Oxford, said at a briefing.

After inoculating a larger proportion of people than any other major economy, Britain has seen infections soar in recent weeks as the Delta variant spreads. The pickup in cases has led to some debate over whether the UK government should further shorten the recommended interval between Pfizer doses, recently lowered from 12 weeks to eight.

The research looked at the immune response to the Pfizer vaccine ranging from a three-week dosing interval to 10 weeks. While the shot generated a strong reaction across the time span, the longer gap showed some advantages.

Neutralising antibody levels were twice as high after the 10-week interval than after the three-week span, including against Delta and all other variants of concern tested. The more protracted regime also improved the response of helper T cells, which support immune memory. The findings have not been peer-reviewed.

A drawback to the longer interval, however, was a decline in antibody levels between the first and second doses, in particular against the Delta variant, the study found.

Global studies show that both the short and long dosing schedules lead to strong real-world protection against COVID-19, emphasising the importance of having a second dose of the vaccine, the scientists said.

The study looked at the immune response in 503 British healthcare workers, about three-quarters of whom were women. It was funded by the UK’s Department of Health and Social Care and conducted by scientists from the universities of Oxford, Newcastle, Liverpool, Sheffield and Birmingham, with support from the UK Coronavirus Immunology Consortium.

A separate study announced by Israel’s health ministry has determined that Pfizer’s vaccine had proved only 39 per cent effective against infections – but it provided a strong shield against hospitalisation and more severe disease in cases caused by the Delta variant.

The vaccine provided 88 per cent protection against hospitalization and 91.4 per cent against severe illness for an unspecified number of people studied between June 20 and July 17, according to a report released on Thursday by the health ministry.

The report said that the data could be skewed because of different ways of testing vaccinated groups of people versus those who hadn’t been inoculated.

These results contrast with an earlier study in the New England Journal of Medicine which found that two doses of the Pfizer vaccine offer 88 per cent protection against symptomatic disease caused by the delta variant, compared to 94 per cent against the alpha variant that was first discovered in Britain. Public Health England also previously found that the Pfizer shot was 96 per cent effective against hospitalization.

Pfizer could not be reached for comment immediately. BioNTech is conducting an ongoing review of study data on the vaccine, a spokeswoman said.