The paedophile who was the toast of Paris: Writer Gabriel Matzneff never hid his perversions… but the British 15-year-old he abused in plain sight finally shamed the monster who was lionised by literary society, writes GUY ADAMS

Gabriel Matzneff never tried to hide what he was. And why should he? In France’s highbrow intellectual circles, sexual deviancy has always tended to be something that ‘right-thinking’ liberals celebrate.

The writer and philosopher, now 83, was therefore elevated to fame in 1974 when he published a highbrow defence of child sex called Les Moins De Seize Ans [The Under Sixteens] which argued that ‘sleeping with a girl or a boy is a … baptismal challenge, a sacred adventure’.

His book was widely admired in literary Paris, where it was then fashionable to regard paedophiles as a sort of oppressed minority, seeking to rebel against traditional middle-class values.

Matzneff became a regular on TV, as a studio guest on a famous arts programme and was granted a column in newspaper Le Monde. 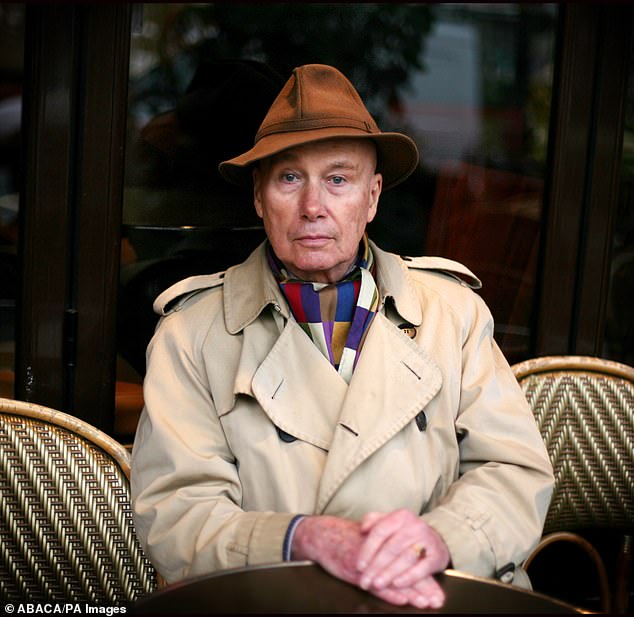 Gabriel Matzneff, 83, who wrote openly defending child sex in is break-through book in 1974, was once the toast of Paris. He appeared on television shows and even had a newspaper column. His views were not only accepted by celebrated by some, until attitudes shifted

He signed lucrative book deals with prestigious publishers Gallimard and built friendships with a host of establishment figures, from designer Yves Saint Laurent to the future President Francois Mitterrand, who declared him a ‘hedonist inspiration’. The nation’s great and good continued to celebrate this self-confessed paedophile after the publication in 1985 of his explicit diaries Un Galop d’Enfer [A Hellish Gallop], in which he not only spoke of seducing young schoolgirls but also recalled regular visits to child prostitutes in the Philippines. On these trips, he wrote: ‘Sometimes, I’ll have as many as four boys, from eight to 14 years old, in my bed at the same time.’

Far from being chucked in jail, this candid admission saw Matzneff likened by the country’s intellectual elite to Vladimir Nabokov, the author of Lolita. He was garlanded with major state honours, becoming an Officer of Arts and Letters and Knight of the Order of National Merit.

On a highbrow talkshow in the 1990s, the studio audience chuckled warmly as host Bernard Pivot joked with balding Matzneff about his fondness for child sex, dubbing him ‘a veritable professor of sexual education’.

Mr Pivot is a former president of the Academie Goncourt, one of France’s most famous literary institutions.

In 2002, Matzneff was given a valuable lifetime stipend — in effect an annual salary — from the National Book Centre, for his services to Gallic culture. As recently as 2013, he was presented with the Renaudot Prize, one of the country’s most prestigious literary awards.

Were it not for the pesky #MeToo movement, which in France is called #Balance TonPorc [denounce your pig], there is every chance this elderly man of letters would now be spending his teatime years in genteel retirement, still writing for eminent journals and accepting invitation to highbrow literary events.

But the wheels of justice have an unfortunate habit of turning when you least expect it.

Today, Matzneff belatedly finds himself shunned by the French establishment, under police investigation for child rape and facing trial next year for promoting sex crimes.

This recent development comes thanks principally to the bravery of two women who, after decades of silence, have come forward to publicly claim appalling abuse they say they suffered as teenagers at the hands of the respected intellectual — explaining how, far from being harmless love affairs, the relationships scarred them for life.

One is Francesca Gee, a 62-year-old British journalist who has just identified herself as the subject of La Passion Francesca, a notorious book in which Matzneff chronicled their exploitative relationship.

Gee told the New York Times how Matzneff, 37 at the time, seduced her in the early 1970s, when she was 15, and went on to abuse her for three years. She described the experience as a ‘cataclysm that shattered me… and that changed the course of my life’, telling how she was left ‘ashamed, bitter and confused’.

The second whistleblower is Vanessa Springora, the 47-year-old head of a French publishing house. In January, she published a memoir called Consent, in which she alleges she was groomed and abused by Matzneff, who was then 50, from the age of 14.

‘This man was no good,’ she wrote. ‘He was, in fact, what we are taught to fear from childhood: an ogre.’

Their claims have raised serious questions about the perverse cultural elitism that for decades has seen France’s intellectual establishment tolerate, and even promote abusive sexual practices, provided the perpetrator can come up with a suitably fashionable philosophical justification for them.

They have also raised serious questions about the moral compass of the nation’s chattering class.

Gee, for example, told how Matzneff was able to charm her late father, a Paris-based Reuters journalist called Jack Gee (who often attended highbrow dinner parties with the writer and was desperate to be seen as a friend of his), into approving of the relationship.

He then pulled political strings to have her transferred to a high school near his home called the Lycée Montaigne, where he would meet her daily outside the school gates.

‘He came every day to make sure that everyone understood that no one was supposed to try anything with me,’ she recalled. ‘It was a very specific place where he was just standing there waiting for me.’

Scandalously, Matzneff found a gynaecologist called Dr Michèle Barzach who would prescribe contraceptive pills to his teenage lover without parental authorisation, a practice that was then illegal.

Gee said she saw Dr Barzach a half-dozen times over three years. ‘He calls her and makes an appointment, and we go,’ she recalled. ‘He’s in the waiting room while I’m with her. And then he comes in, and they talk and he pays her.’

Dr Barzach, who was also a psychoanalyst, happens to have been France’s health minister from 1986 to 1988 under Matzneff’s chum Francois Mitterrand. Astonishingly, from 2012 to 2015, she was French head of UNICEF, the UN’s child protection agency. She has yet to comment on Gee’s claims.

Gee says she suffered further torment when Matzneff chose to publish love letters she’d sent him —some of which were sexually explicit — in a book called Les Passions Schismatiques, in which he argued they were evidence that ‘a relationship of love between an adult and a child could be for the latter extremely rich, and the source of a fullness of life’.

His publishing house Gallimard even refused Gee’s requests to remove a black-and-white photograph of her from the cover of his novel Ivre du Vin Perdu (Drunk On Lost Wine).

These evil books — there’s no other way to describe them — for years helped provide intellectual cover for predatory men to abuse prepubescent children. 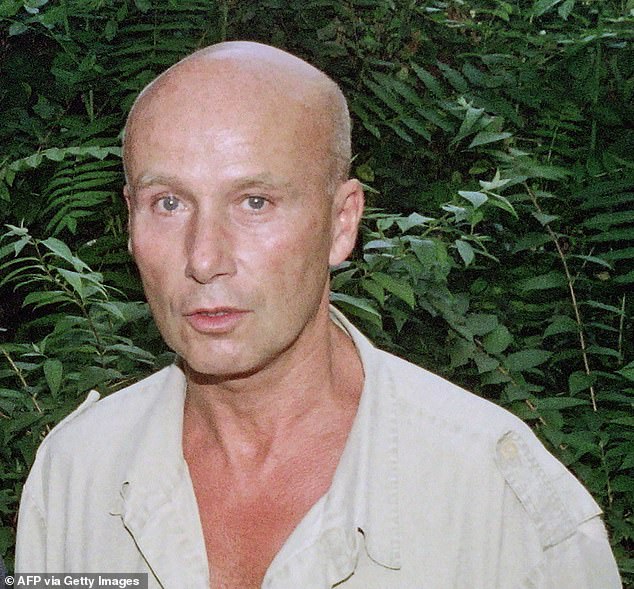 Matzneff, pictured here in 1990, is now facing allegations from two women, has been shunned by the French establishment, is under police investigation for child rape and facing trial next year for promoting sex crimes

Although the age of consent in France is 15, prosecutions were rarely pursued against men who had sex with under-age girls, particularly when the perpetrators were well connected.

Springora’s recent book, meanwhile, tells that she initially met 50-year-old Matzneff after her mother, who worked in publishing, dragged her to a dinner party. Soon, he was meeting her after school and taking her for sex at a hotel where he kept permanent rooms.

The hotel room, which Matzneff kept for two straight years, turns out to have been paid for by one Christophe Girard, who was then working as an aide to designer Yves Saint Laurent and his partner Pierre Bergé. Mr Girard is now the powerful deputy mayor of Paris. Asked why, for years, he helped a child sex offender carry out his abuse, he told reporters he’d never realised that his chum was a practising paedophile, despite the contents of his various books.

‘Maybe I’m a little naive,’ he declared. He told the New York Times he paid the hotel bills because he was acting as an ‘intermediary’ for Bergé.

Be that as it may, Girard has nonetheless been questioned by police, who, following the publication of Springora’s book in January, launched a formal investigation, raiding his publisher’s offices and home.

Although the statute of limitations has run out for Matzneff to be charged with sexually abusing Springora, Paris’s public prosecutor has asked for other potential victims and witnesses from more recent times to come forward.

In a separate private prosecution, brought by a victims network organisation, a Paris court has set a trial date in September on allegations that Matzneff’s work is an ‘apology for paedophilia’. Gallimard have withdrawn the books from sale.

The man himself, meanwhile, high-tailed it to Italy, where he was recently tracked down by a French TV crew. In an interview, Matzneff described his relationship with the underage Springora as a love affair, saying: ‘We were happy together. I have marvellous memories. We lived a lasting and marvellous love story… At that time, nobody thought of the law. We did things that weren’t allowed … nobody spoke of a crime at that time.’

Though he’s now something of a social pariah, Matzneff still boasts the odd friend in high places.

In court, he’s being represented by a lawyer and longstanding supporter called Emmanuel Pierrat, who is also president of the French branch of PEN, a charity that campaigns for free speech on behalf of writers. Its sister organisation in the UK, also called PEN, boasts a host of British literary titans as honorary vice presidents.

There can be no suggestion that any of these people condoned Matzneff’s behaviour, of course.

Whatever the outcome of his case, there are signs that l’affaire Matzneff may finally herald a long-overdue shift in French attitudes to the exploitation of children, which (as his career demonstrates) have historically been appallingly relaxed.

For years, France has for example refused to extradite the film director Roman Polanski to the U. S., where he’s been wanted since 1978 after doing a runner having pleaded guilty to unlawful sex with a 13-year-old girl.

As recently as January, his film An Officer And A Spy was nominated for 12 Césars, the ‘French Oscars’.

When Dominique Strauss-Kahn, the man tipped as France’s next president, was arrested in New York and charged with sexual assault and attempted rape of a hotel maid in 2011, public figures queued up to defend him, with one eminent magazine editor saying he was guilty of nothing more than ‘un troussage de domestique’, the practice of a master having his way with a domestic servant.

(Criminal charges were eventually dropped, though Strauss-Kahn settled a civil case against the woman for around $1.5million.)

As recently as 2018, when the #MeToo scandal broke, a hundred French women, including actress Catherine Deneuve, signed an open letter defending men’s ‘freedom to bother women’, which they argued was ‘indispensable to sexual freedom’.

Sexual freedom was of course one of the ways Matzneff for decades sought to justify his abuse. But the women he bothered are now striking back.