How prevalent were sports comedies in the early ’90s? Three of them opened on the same day 30 years ago, March 27, 1992: The Cutting Edge, Ladybugs and White Men Can’t Jump.

D.B. Sweeney played a lot of basketball in those days and pushed to star in that last one, the buddy comedy about two street ball hustlers — one white, one Black — who join forces on the Venice Beach courts.

“I really wanted to do it, but I had turned down the part of Nuke LaLoosh in Bull Durham,” Sweeney, 60, says of the 1988 Ron Shelton-directed baseball film that eventually featured Tim Robbins in the role of the erratic pitcher (watch our new interview above). “So Ron Shelton, when I tried to lobby to be the guy in White Men Can't Jump, he said, ‘No, he's just gonna turn me down again.’ I was like, ‘No, I'm not. Believe me, I'm gonna do it.’

“I remember my agent pitched him and he said, ‘I love D.B. But you know, he didn't do my last one. Why would I give him this one?’”

It was Woody Harrelson who ultimately landed the role of Billy Hoyle opposite Wesley Snipes’s Syd Deane in Shelton’s basketball hit.

But Sweeney scored a heckuva consolation prize when he was cast as hockey star-turned-Olympic figure skater Doug Dorsey in the beloved rom-com released that same day, The Cutting Edge. And Sweeney didn’t even know his way around the rink at the time. 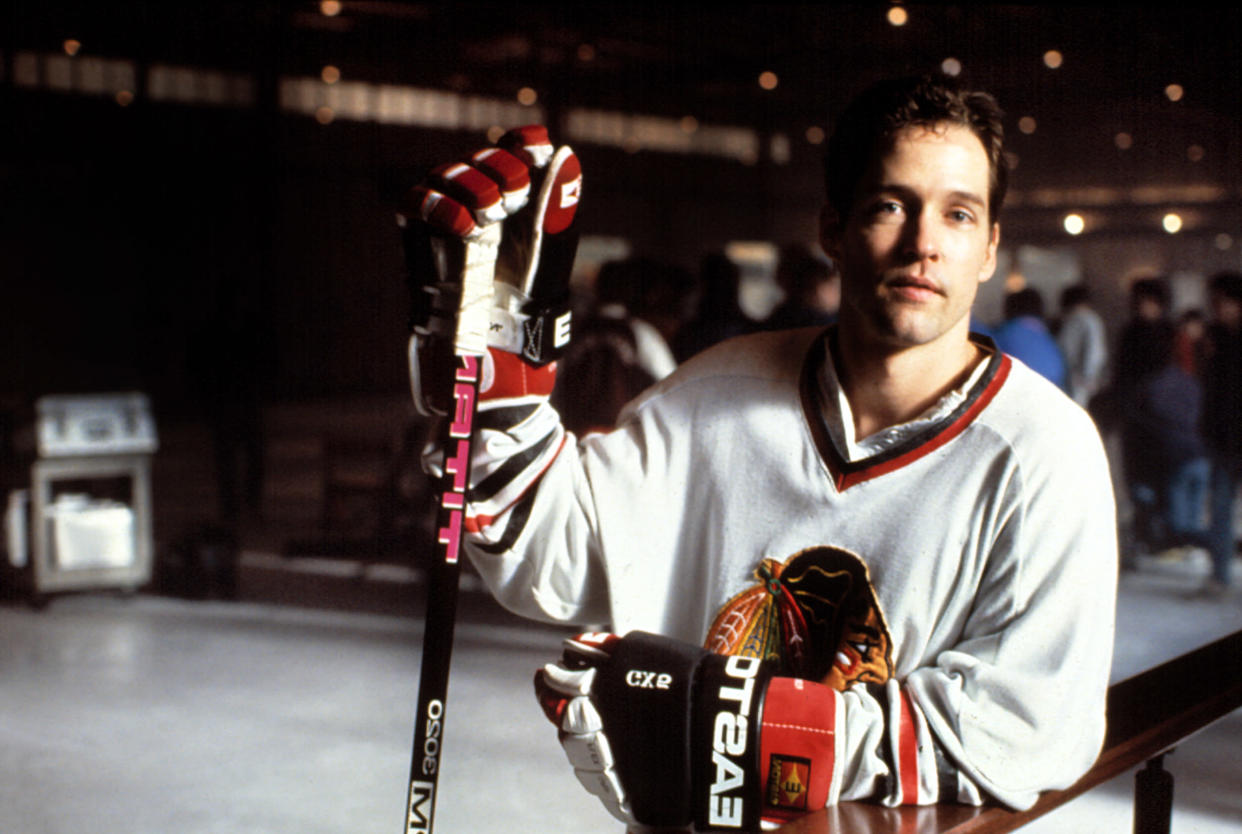 “I didn't play hockey, but Cutting Edge changed my life,” he says now. “They hired me knowing I couldn't skate, but there was three months until we started filming. They said, ‘We'll hire a hockey coach if you feel like skating. I think they thought I'd probably do a couple days a week. … I skated every day for three months, except for four days.”

Sweeney has played hockey ever since. At least when he’s not acting. Living in the suburbs of Chicago, he skates twice a week to this day — one day with retired NHL players from the Blackhawks, the other in an adult beer league.

The actor has fond memories of meeting Moira Kelly, whom he watched beat out Gabrielle Anwar for the part of Kate Moseley, the rich and sometimes difficult star figure skater paired with Dorsey for an Olympic run. “We’re both from Long Island, New York, so it felt like I was riding on the school bus with one of the girls I went to high school with, you know, in the best possible way.”

Sweeney did much of his own skating, but Kelly primarily relied on a stunt double after breaking her leg during the first week of filming. No one, however, fully executed the Pamchenko, the couple’s impossible signature move.

“It breaks all the laws of physics. I mean, you can’t throw something and stay still and then have it come back to you unless it’s a boomerang,” Sweeney explains. “That’s me spinning around with a mannequin. When you see the shot of, it looks like Moira. And the hardest thing [we dealt with was] having the wig not fly off the mannequin’s head. … It’s just too dangerous, spinning somebody around like that with their head, almost hitting the ice. If you’re wrong, you could kill somebody.”

Even more than “Pamchenko,” there’s another phrase every moviegoer alive in 1992 remembers from The Cutting Edge: “toe pick.” It’s how Kate taunts the equally arrogant Doug as he stumbles over his new figure skates, and it became ubiquitous after the film’s release.

“Just after the movie came out, I remember I was running through the airport and I stumbled and seven people yelled ‘Toe pick!,’” Sweeney says. “I thought it was nuts. I was glad that everybody saw the movie, but I didn't realize that it had already immediately sort of embedded itself into the general consciousness.”

There were three subsequent Cutting Edge movies but neither Sweeney nor Kelly participated in them. (Neither did director Paul Michael Glaser nor screenwriter Tony Gilroy, who would go on to receive Oscar nominations for writing and directing Michael Clayton and who also scripted the Bourne series and Rogue One: A Star Wars Story).

“We had made a deal during The Cutting Edge that we’ll never do the sequels, unless we both do it. And we stuck to that bargain,” Sweeney says. “They made three sequels and they made it easy because they offered us like no money, and we were kind of a side show to the story. And I was like, ‘Well, why should we do that?’ That’s not worth doing, so she and I both stuck to that.”

Sweeney and Kelly did reunite for the 2006 road trip comedy Two Tickets to Paradise, which Sweeney also co-wrote and directed, with Kelly playing his unfaithful wife. “I thought it was a fun little shout to people who were fans of The Cutting Edge.”

When he’s not playing hockey, Sweeney is co-starring on the CBS sitcom B. Positive. He also recently teamed with Sean Astin for Two Dum Micks, which has won accolades on the film-festival circuit.

Kelly has acted sparingly since her long-running role on One Tree Hill, but recently appeared on the Amazon Prime series Panic.

Their Cutting Edge bond lives on, though.

“The crazy thing is that we're both from Long Island. We both married people from Texas in the year 2000. We both have two kids who are currently a sophomore in college and a senior in high school,” Sweeney said. “We have these weird parallel lives. We’re not in touch on a day-to-day way, but I have so much respect and admiration for her.”

-Video produced by Anne Lilburn and edited by Jimmie Rhee