Not so long ago working from home was a novelty – it felt a bit like wagging school. Workers felt guilty about not being in the office and employers could never be sure if their charges were skiving off.

But in Melbourne, with its lockdown which ran twice as long as anywhere else in Australia, home working now feels normal. And as companies and governments grapple with how to reopen and how social distancing might work in towering office blocks, many are coming to accept that employees will not be returning to the city in anything like pre-COVID numbers. 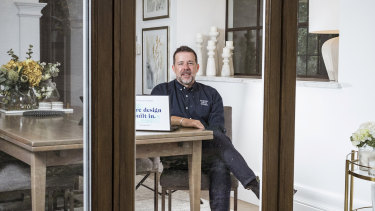 So dramatic is the likely change that a University of NSW and CQUniversity study has described it as a “revolution” in how and where we work. Architects, business figures and builders agree it could change the physical landscape of our city, and will have big implications for the design, configuration and occupancy of its office buildings.

The flipside, in the suburbs, is a rethink about how we build and fit out our homes.

House builder Anthony Roberts is well placed to appreciate the impacts of the revolution on both sides of this equation, and in his view it's obvious: “The five day-a-week in the office routine has been relegated to history.” 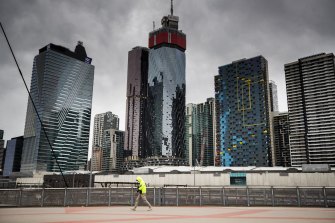 City offices might not fill up for months or years under COVID-normal, despite the reopening this week.Credit:Jason South

Mr Roberts is the founder of home builders Porter Davis, which in pre-COVID times planned its suburban fringe developments from an office in Docklands. On an average workday, more than 300 staff would gather there to design houses and organise their building and sale in outer suburbs like Tarneit in Melbourne’s west.

They were among the 500,000 workers who, pre-COVID, commuted into the central city to work.

But COVID-19 has taught Porter Davis to run its business from the homes of its employees – a transformation made possible by another virus-accelerated upheaval: the dominance of online shopping. Even houses are being ordered on the net.

A staff survey this month told Mr Roberts that 80 per cent of his workers were happy to either continue working at home full-time or blend time at home and in the office. Only 20 per cent wanted to go back full-time to the city.

Even in parts of Australia which came out of lockdown months ago, most businesses report just 40 to 60 per cent of pre-COVID staff returning.

His staff are at least as productive at home, he says, and he expects that in three to five years time – even assuming a COVID vaccine has long taken effect – half or less of them will be in the office on any single day.

If this trend is replicated across the corporate and government offices of the central city it will have a profound impact on its form, as well as the retail and hospitality businesses that rely on the foot traffic of office workers.

Six Degrees is an architecture firm of about 30 based in Fitzroy. At least, it was based there. Director Michael Frazzetto says the lockdown has demonstrated that the office is really only required for grander ideas and strategy sessions. Two of his staff have recently moved to the bush and others are talking about doing the same. Their moves were reflected in an Ipsos poll commissioned by The Age which showed a quarter of Melburnians contemplating a move to either the country or interstate.

“All of a sudden we have an office that is oversized,” says Frazzetto – an observation likely to send a chill down the spines of Melbourne’s commercial real estate agents.

The biggest workplaces in and around the CBD include the offices of federal, state and city public services as well as big corporates such as ANZ, NAB and Telstra. Some of these businesses have told The Age they predict a major reduction, possibly by half or more, of pre-COVID worker numbers in the city on any given day.

Even business lobby group the Victorian Chamber of Commerce and Industry is insisting that a return to an office environment should be voluntary.

“You’re going to have respect that an individual has to make a choice about their own wellbeing, says VECCI chief executive, Paul Guerra. “I don’t think we will ever return to where we were in February this year.”

He points out that, even in parts of Australia which came out of lockdown months ago, most businesses report staff returning at only 40 to 60 per cent of pre-COVID levels. 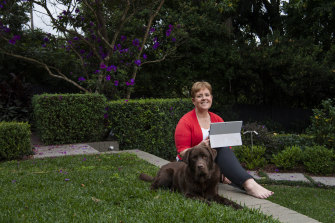 ANZ’s deputy chief executive Alexis George said that during the outbreak, the bank discovered it was able to send 97 per cent of its 11,500-strong Melbourne workforce home.

In Sydney, where the lockdown ended months ago, only about 20 per cent of the bank’s employees are now working from the city office despite a cap permitting up to 50 per cent.

The bank’s return program will initially be voluntary, with employees choosing to work rotations of one in three weeks in the office and then one in two weeks.

“People have gotten quite comfortable working from home and many people I talk to on a daily basis tell me it’s changed their quality of life,” Ms George says. “I think it will take months for any form of normality to start to return. I’ve seen that in every place we’ve reopened.”

The bank expects it can eventually safely accommodate more than two-thirds of its pre-COVID workforce. But achieving a new normal will eventually involve moving to a mandatory return program.

“We will require that people come to the workspace at times, but we also acknowledge that there is going to be much more hybrid working,” says Ms George.

Public servants from all three levels of government made up a substantial proportion of city workers, and they have made it clear they support greater flexibility. A national survey by UNSW Canberra and CQUniversity of 6000 public servants including nearly 1400 managers, found that more than 90 per cent believed their teams’ productivity was the same or higher when working from home, and more than two-thirds wanted to continue doing so on a regular basis.

COVID, according to the report’s authors, had heralded “a revolution in the way we work”. That is likely to be even more so in Victoria.

As for the federal government, it's so keen to get its public servants back into city offices that the Australian Public Service Commission in September advised federal employees to return.

The logistics of getting thousands of public servants safely into offices – especially managing lifts and lobbies, was a major challenge, according to Karen Batt, the federal and Victorian secretary of the Community and Public Sector Union.

The Victorian government has not yet announced a return-to-work plan, but senior government figures insist it will be guided by workers’ wishes. Planning minister Richard Wynne told The Age that flexibility was a “key” to the government’s approach. Even with a vaccine, public servants working at home or in suburban “hubs” could become the new standard for many, he says.

But if we’re all spending a portion of our work week at home, are our houses and apartments fit for purpose? Home builder Roberts says his design team, influenced by surveys of thousands of potential buyers, is now factoring the need for more and better study, work and recreational spaces into new suburban home layouts.

Cramped and lightless “study nooks”, workplaces under the stairs or in the corner of living areas are no longer adequate. Potential buyers are now talking about the “blurring” of life and work and want homes with distinctive zones, he says.

In the city, apartment dwellers have long accepted a trade-off between space and access to the cosmopolitan lifestyle of the streets, but after seven months of lockdown, it’s a trade-off that might no longer seem reasonable.

In Prahran, developer Dean Lefkos of Chapter Group recently received an unusual request from the purchaser of the penthouse atop his boutique development Ukiyo, which is now under construction.

Initially conceived as a three-bedroom apartment, the owner has requested changes that will see it built with two bedrooms and two studies, which will occupy the best corner.

“I’ve never had a request for two studies, Lekos says. At the developer’s upcoming project in Armadale each apartment will now also get a dedicated study: “The study areas will have a bit of joinery on the back wall which looks good when you’re using something like Zoom or Teams,” says Lefkos.

Frazzetto of Six Degrees says architects are also working on ways to get more garden space into projects and a more Japanese-like focus on multiple uses of space. In his own North Carlton home Frazzetto works from a small workspace in a corridor – a pre-COVID design that didn’t anticipate working amid the mayhem of children.

“There was one important Zoom meeting when I was pitching something to clients with rabbit ears repeatedly appearing on my head,” he says with a sigh.

“I have to tell you that a separate home office would have been gold in the last few months.”