A 24-storey tower nearing completion at The Block in Redfern is among locations being considered as the state’s first quarantine facility for international students when they return to NSW.

The 600-bed, $100 million Scape student accommodation development is in line to house the first intake of overseas students while nearby accommodation provider Iglu, which has inner-city locations, has also thrown its hat in the ring, industry sources who are familiar with the proposal say. 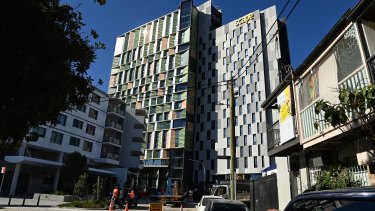 The Scape student accommodation development at The Block in Redfern is nearing completion.Credit:Nick Moir

While he declined to make any comment on the government application process for the pilot, Scape co-founder Craig Carracher said the building had been re-engineered with airflow systems, door sensors and contactless access points to help combat the spread of COVID-19.

“We feel The Block at Redfern is probably one of the best and safest buildings for quarantine, but it’s not suitable for anyone else other than students. It’s designed for students and it will be delivered for students,” Mr Carracher said.

He added he expected the building – due to be completed in a fortnight – would exceed preconditions for quarantine.

International Education Association Australia CEO Phil Honeywood said the sector was looking forward to an imminent announcement as to where international students would be safely quarantined following the announcement South Australia was preparing its own plan. That plan would see incoming students isolating in accommodation at Parafield Airport in Adelaide’s north. 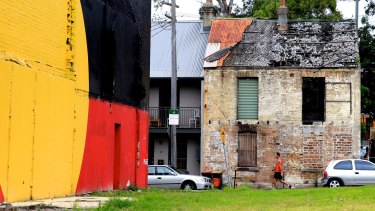 The Block in the years before it was redeveloped.Credit:Edwina Pickles

“A number of purpose-built student accommodation companies have gone out of their way to meet NSW Health and police regulations,” Mr Honeywood said.

However, the prospect of a quarantine facility in the central Sydney location has caused concern about its effect on vulnerable members of the Indigenous community.

The Redfern development has had a divisive history as part of the Aboriginal Housing Company – owned by Pemulwuy Project, which has been vehemently opposed by Aboriginal residents who argued they were being forced out. 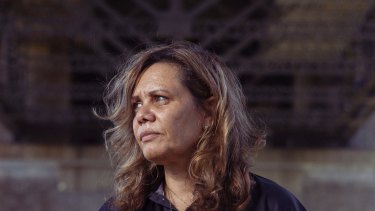 “Using it to quarantine international students and jeopardise the health of the few members of our community who were lucky enough to secure affordable housing options for Aboriginal people is just another way the Aboriginal Housing Company continues to put lucrative student accommodation before Indigenous residents,” Ms Weldon said.

The Herald has sought comment from the Aboriginal Housing Company.

Professor Ben Mullins, an aerosol scientist from the School of Population Health at Curtin University, said the community was important in considering the location of a quarantine facility, saying the Howard Springs centre outside Darwin was a good initial option.

“My preference for a quarantine system would be to have a centralised location which is away from other population centres and away from vulnerable populations,” Professor Mullins said.

Mr Carracher said the site would otherwise be mothballed into next year, and an intake in quarantined international students would allow Scape to expedite its promise of providing housing scholarships for Indigenous students at its other nearby sites.

“We can’t do that if the building’s shut,” Mr Carracher said, adding the company was losing $6 million a week from empty accommodation nationally.

He said one of the design advantages of the development was the positive airflow system in the corridors to keep air from the rooms flowing into common areas.

Professor Mullins said handling airflow and filtration was one of the biggest factors in guarding against aerosol transmission.

A NSW Treasury spokesperson said the government had created a shortlist of student accommodation providers but a decision was yet to be made.

“International students are one of Australia’s largest and most important export sectors, an industry worth about $14 billion a year to the NSW economy before the pandemic, and which supports tens of thousands of local jobs,” the spokesperson said.

Federal Education Minister Alan Tudge said the South Australian proposal appeared to meet the government’s criteria but the plan would be worked through carefully in the coming weeks.

“International students have been great for our economy and society and we want to get them back, however we obviously have to be very careful we don’t risk further COVID outbreaks in doing so,” he said.

The federal government has not received a proposal for the return of international students from the NSW government.