A U.S. Border Patrol investigation led this week to the discovery of 35 illegal immigrants inside a “stash house” in the U.S. border town of El Paso, Texas, according to a report.

All 35 occupants of the house were sent to Mexico, Border Patrol officials told Border Report. They included seven Mexicans, 19 Guatemalans, seven Ecuadorians, one Nicaraguan and one Honduran, the report said.

“Our El Paso Sector integrated targeting teams focused on disrupting human smuggling continue to hinder the attempts of human smugglers who harbor illegal migrants, sometimes in deplorable, sub-standard living conditions,” El Paso Sector Chief Patrol Agent Gloria I. Chavez said in a release, according to the outlet. “We will continue to target Transnational Criminal Organizations in our region that continue to place the safety and well-being of migrants at risk.”

Prosecution remained pending for one Mexican national who was described as the “caretaker” of the home, the report said. 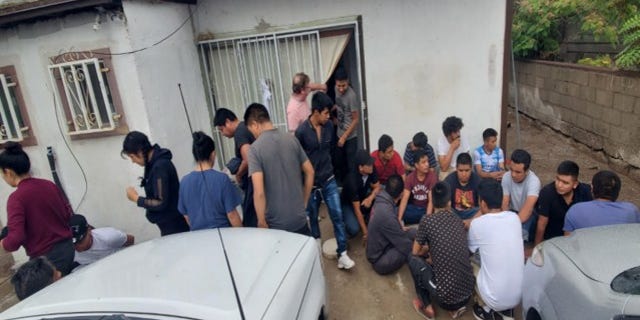 El Paso has seen more than 86,000 illegal border crossings from 2019 to the end of May 2021, a tally that represents a 261% increase over previous figures, the report said.

Stash houses are shelters where alleged smugglers hide illegal immigrants brought into the U.S. They often include large groups of migrants huddled amid squalid and unsanitary conditions, authorities have said.

In mid-June, Border Patrol agents said they found more than 100 illegal immigrants packed inside a stash house in the Laredo, Texas, area.

Earlier in June, agents discovered a total of 128 illegal immigrants living across three separate sites during an operation that took about two hours.