This is the heart stopping moment a lorry and car collided on a motorway near to Leeds sending smoke billowing into the air.

The lorry was changing lanes, with little room for manoeuvre when the collision happened on the M1, sending the car spinning to face the central reservation and leaving tyres marks on the road.

Dash cam footage taken by the car behind the HGV recorded the incident on May 26th at around 12:50 p.m. when the lorry sideswipes the car, pushing it down the motorway. 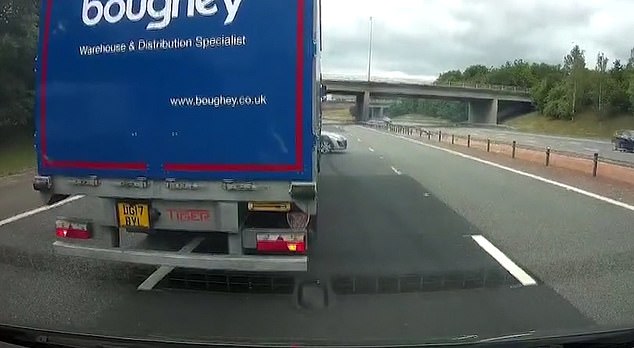 The lorry was changing lanes when the collision happened on the M1 near Leeds, the car was shunted  in front of the HGV (pictured)

Footage shows a blue HGV lorry travelling in the middle lane that had passed a white van.

As the lorry passes the exit slip road for junction 45, the A63 to Leeds, it continues in the middle lane and a silver Mazda car can be seen in the inside lane, near enough level with the truck.

The lorry starts to move into the inside lane looking as though it is about to pull in tightly behind the Mazda. 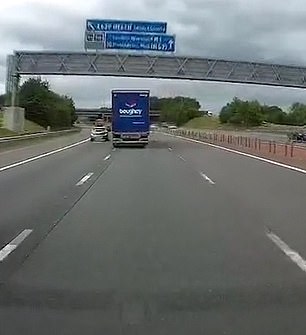 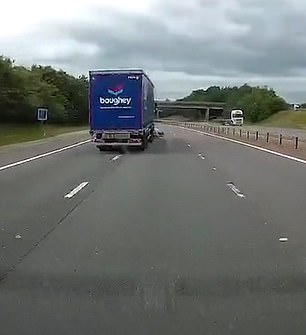 Footage shows a blue HGV lorry travelling in the middle lane that had passed a white van. As it moves over, the Mazda car is shunted

The car then completely disappears from view before re-emerging, after it is shunted sideways, in front of the lorry when smoke can be seen pouring from the tyres.

The driver recording the incident then pulls into the hard shoulder.

According to the driver who recorded the footage, the woman in the Mazda car escaped without injury through the passenger side door. 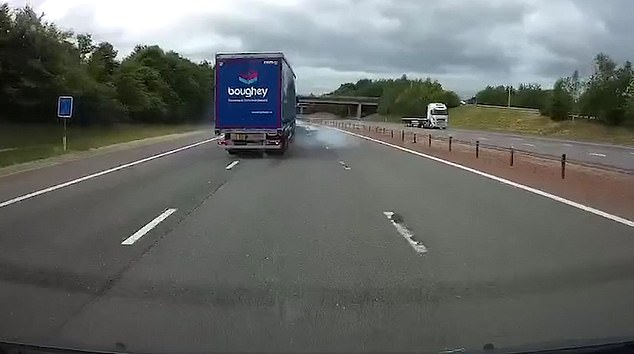 ‘She’d managed to exit through the passenger side door as the driver side doors were full of HGV, she looked like she was going to keel over and was as white as a sheet.

‘I called 999 and asked for the police, they actually arrived before I’d finished making the call,’ the driver told MailOnline.

He added that the lorry driver ‘seemed absolutely gutted that he’d hit the car’ and he was really concerned that the other driver was OK.’

The HGV driver allegedly said the car must have been in the ‘blind spot’ of his mirror.

West Yorkshire police told MailOnline that the driver was reported for driving without due care and attention.

MailOnline have contacted Boughey, the owner of the HGV, for comment.