The only borough of Surrey where coronavirus infections fell last week will be forced into a Tier Three local lockdown from Saturday despite the part of the county where cases are rising fastest escaping the tougher rules.

Runnymede, the borough that contains commuter towns Chertsey and Virginia Water, saw its rate of coronavirus cases per person drop by 31 per cent between December 4 and December 11, but has been included in the county’s Tier Three rules.

Meanwhile in Waverley, around the towns of Farnham and Godalming, the rate of cases surged by 84 per cent during the same time but residents are the only ones in the county not be forced to abide by the tougher rules.

The leader of Surrey County Council, Tim Oliver, said today’s announcement was ‘very disappointing news’ for residents and businesses in the county.uc

The county has a population of 1.19million people, with around 126,000 living in Waverley and exempt from the Tier Three rules.

And the confusing split comes as data shows 40 areas in Tier Three saw their infection rates come down in the week ending December 11 – with many of them plummeting below the national average and lower even than Tier Two areas – but must stay in the toughest restrictions.

Health Secretary Matt Hancock today allowed only Bristol and North Somerset to emerge from local lockdown and reopen pubs and restaurants, denying the privilege to millions in the North and the Midlands, many of whom have been in lockdown since mid-October. 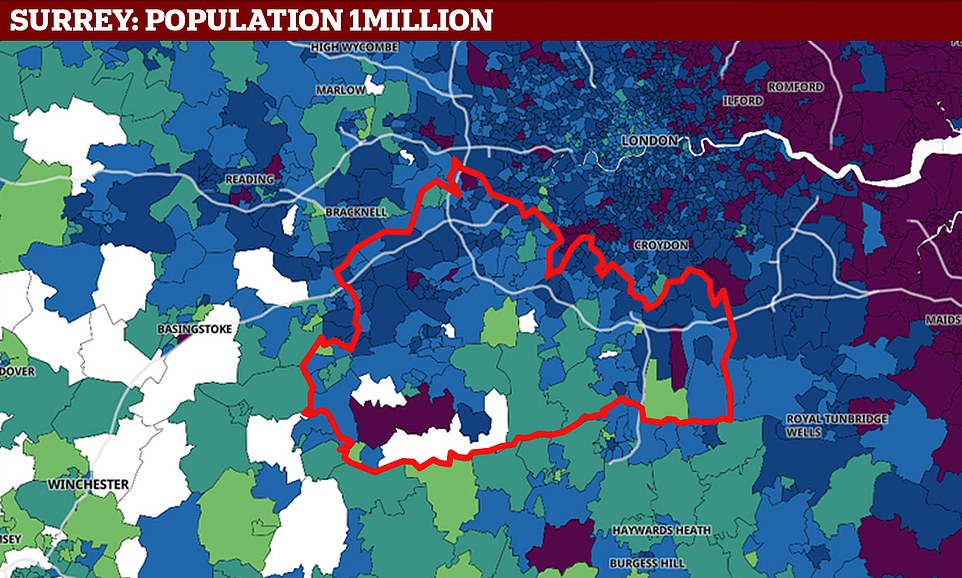 All of Surrey except for Waverley, in the bottom left of the red outline, will go into Tier Three from midnight tomorrow night. This is despite one district of Waverley having the highest infection rate in the county (the large area shaded in dark purple) and cases across the borough almost doubling in the most recent week 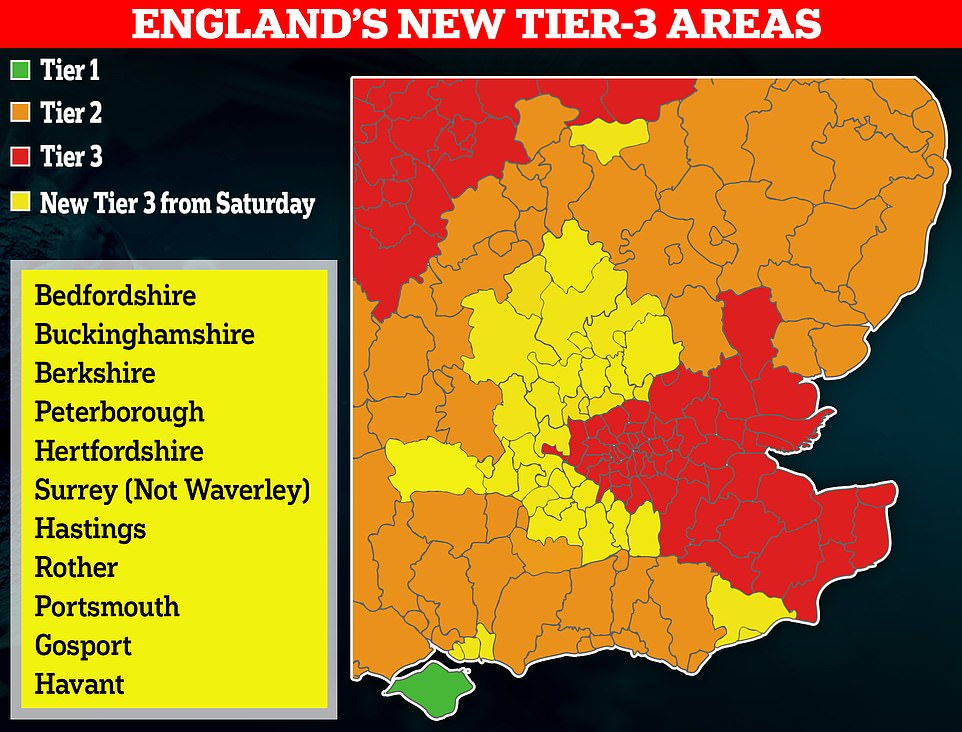 Waverley escaped Tier Three today despite the fact that its district of Wheelerstreet, Wormley & Hambledon has the highest rate of cases per person in the whole county, with a rate equivalent to 537 per 100,000 people, with 39 cases diagnosed last week.

Meanwhile there are other boroughs with districts that had no cases at all during the same time but will still be forced into Tier Three, such as areas in Bookham and Reigate.

And people in Guildford must now live under Tier Three restrictions even though the neighbouring borough of Rushmoor, which is in Hampshire, has a higher infection rate that is rising faster – 158 per 100,000 compared to 191, with increases of 59 per cent and more than double, respectively.

Five out of Surrey’s 11 boroughs have case rates below the England average (196 per 100,000), although all but one increased in the week ending December 11.

Waverley’s rise was the biggest in the county but the ultimate rate of cases per person remains the lowest in Surrey at 132 per 100,000 people.

WHICH BOROUGHS OF SURREY HAVE THE HIGHEST RATES OF CORONAVIRUS?

% change in a week

Swathes of Surrey have infection rates far below average and lower than Tier Two areas.

Rural areas in and around the Surrey Hills, such as Horsley & Effingham, which had just five cases in the week to December 11, Broadbridge Heath (six) and Westcott Ockley & Capel (six) must all move into Tier Three.

This means pubs, restaurants and cafes will be forced to close and people will only be allowed to meet in public open spaces like parks and woodland.

Waverley’s council congratulated its residents in a tweet posted this afternoon and former Health Secretary Jeremy Hunt, who is MP for the borough, thanked Matt Hancock in the Commons for keeping it in Tier Two.

He said: ‘I’m… grateful that Waverley has been excluded from the Surrey-wide move to Tier Three in recognition of our lower infection rates although we will remain vigilant’.

Waverley Borough Council tweeted: ‘The rest of Surrey will be moving to Tier 3 at 12.01am on Saturday 19 December 2020. Well done to everyone for playing your part and helping to keep levels of Covid cases down.’

Conservative MP for Guildford, Angela Richardson, welcomed the move and said: ‘Right decision for Waverley residents and one that Surrey MPs have successfully jointly argued for consideration, based on numbers. Understandably difficult news for rest of Surrey including Guildford.’

On Monday, before the decision had been confirmed, Woking MP Jonathan Lord singled out Waverley and nearby Mole Valley as places less affected than the rest of the county.

He said: ‘Coronavirus has been on the rise in most of Surrey, with Runnymede and Woking, regrettably, the two boroughs worst affected.

‘Waverley and Mole Valley, on the other hand, remain low. I’m hoping that we don’t have to go into Tier 3, but I’m sure that it’s under consideration.’ 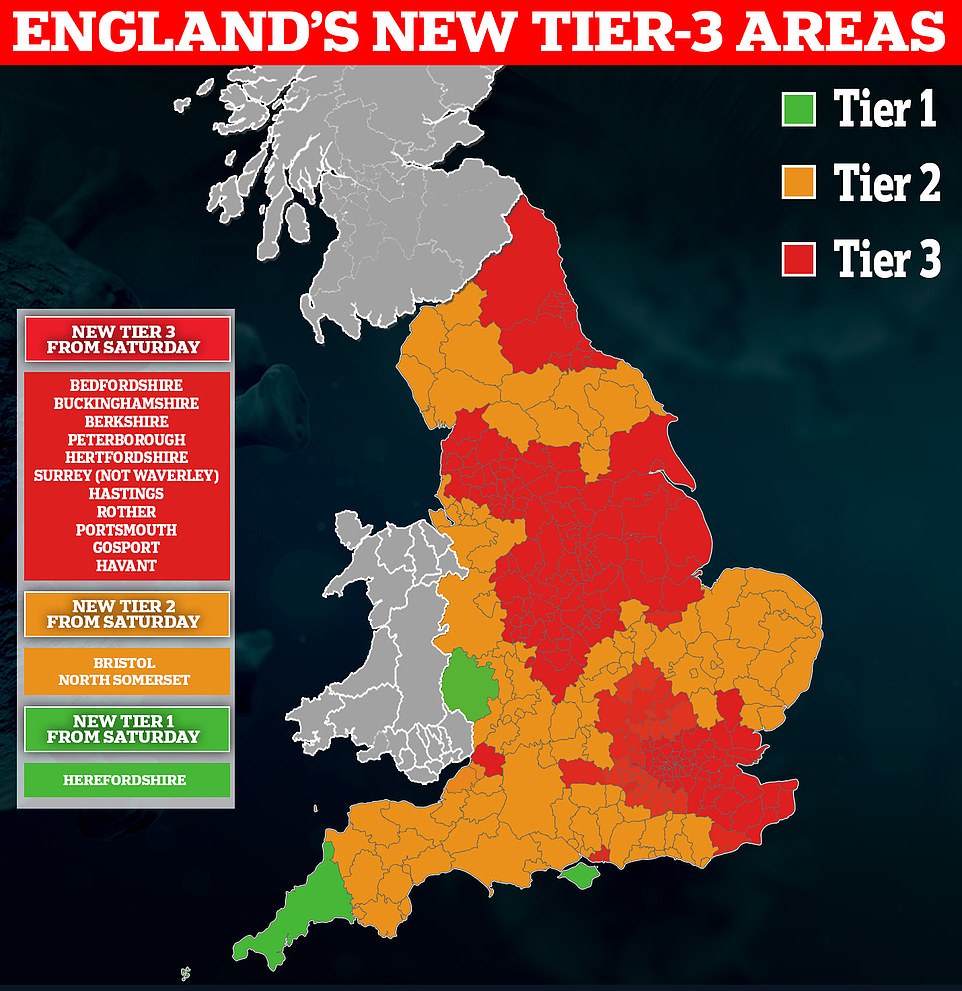 Although his predictions came true for the most part, Mole Valley was swept into the Tier Three rules – infections there rose 48 per cent in the most recent week to 148 per 100,000, marginally higher than Waverley’s but with a bigger increase.

What are the Tier 3 rules?

The leader of Surrey County Council admitted the move had come at the end of an ‘exceptionally difficult year’.

Mr Oliver said: ‘We need to take swift action to save lives and stop our crucial NHS services from being put under even more pressure.

‘We all need to be extremely vigilant, including residents in Waverley, as the situation can change quickly and we want to prevent them going into Tier Three in the new year.’

The Surrey move comes amid confusion across the country as he pushed huge parts of the South East of England into Tier Three and refused to pull out parts of the North and Midlands that were already in it.

A total of 38million people – more than two thirds of England’s population – are now living under the toughest rules in a de facto lockdown in the run-up to Christmas.

This is despite the fact that 40 areas remaining in Tier Three saw their infection rates fall between December 4 and December 11, many to levels significantly lower than areas even in Tier Two and far below England’s average.

And in the Derbyshire Dales, a rural area where there were just 73 cases per 100,000 people and falling, residents were told they must remain in Tier Three.

Bristol, meanwhile saw its cases fall by 10 per cent from 130 per 100,000 to 117, and was allowed to move down into Tier Two – despite a smaller fall than the Dales’s 15 per cent and an ultimately higher rate.