Successful asylum claims DOUBLE in seven years to more than 20,000 a year as figures show more people are now allowed to stay in Britain than are refused entry

The number of successful asylum claims has doubled since 2013, new figures revealed today.

More people are now granted asylum in Britain that are refused it, according to Home Office statistics.

But the Home Office said that in the year to June – in the midst of the coronavirus pandemic, the UK offered protection – in the form of ‘asylum, humanitarian protection and alternative forms of leave and resettlement’ – to 16,952 people.

This was an 8 per cent fall on the previous year ‘although higher than levels seen prior to 2019’. The three nationalities making the most asylum claims were Iranian, Iraqi and Albanian.

It came as the Home Office was been accused of ‘painting lawyers as villains’ amid a row over migrant crossings.

More migrants arrived in Dover on Thursday morning as Britain shakes off the high winds of Storm Francis. 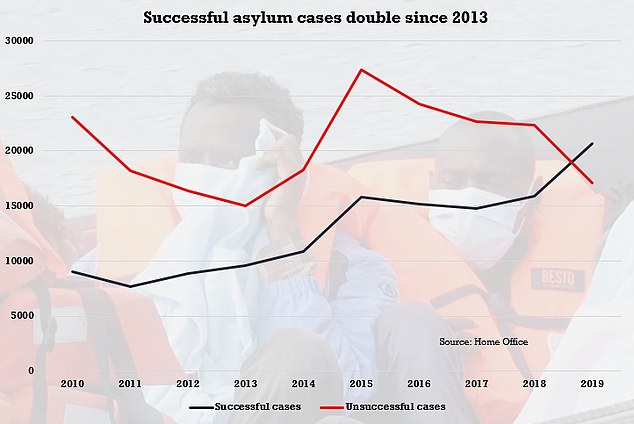 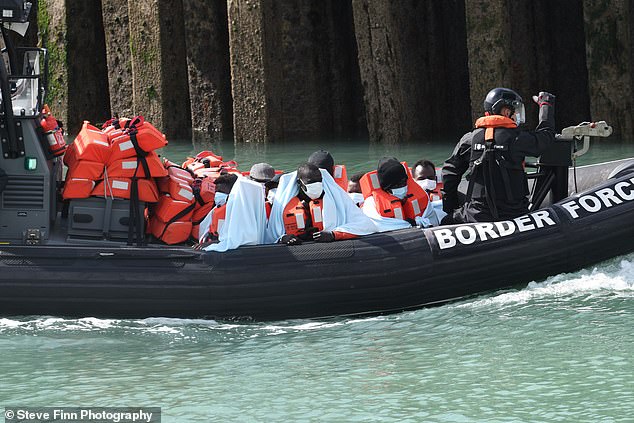 The new arrivals – brought in on Border Force speedboats – were taken ashore in the Kent port.

It comes as the Home Office faces criticism over its renewed attack on ‘activist lawyers’ which it says are hindering their efforts to deport migrants.

A video posted to its Twitter account on Wednesday evening showed a moving graphic of deportation planes leaving the UK.

The clip has been branded ‘scandalous’ and ‘utterly disgraceful’ by senior law figures, and many on social media likened it to something from the TV show Dad’s Army.

The Law Society condemned the video, and president Simon Davis said: ‘Attacks on the integrity of the legal profession undermine the rule of law.

‘To describe lawyers who are upholding the law as ‘activist lawyers’ is misleading and dangerous.

The video, which has been viewed more than 630,000 times in less than 24 hours, says: ‘We are working to remove migrants with no right to remain in the UK.

‘But currently return regulations are rigid and open to abuse…

It has sparked criticism and debate on social media, with lawyer and politicians weighing in.

‘They ensure OUR laws are followed. This is scandalous.’

Meanwhile Labour MP Stella Creasey said: ‘The UK Government attacking ‘activist lawyers’, dehumanising people fleeing persecution and boasting about deportations as if that will stop the traffickers – Trump isn’t their inspiration, this IS Trump.

‘Not only shameful, ultimately futile as the boats keep coming…’

Barrister Richard Booth QC tweeted: ‘This is utterly disgraceful from the Home Office, painting lawyers as villains. A very slippery and dangerous slope.’

Groups of migrants wearing blankets were seen arriving into the port of Dover earlier on Thursday morning. 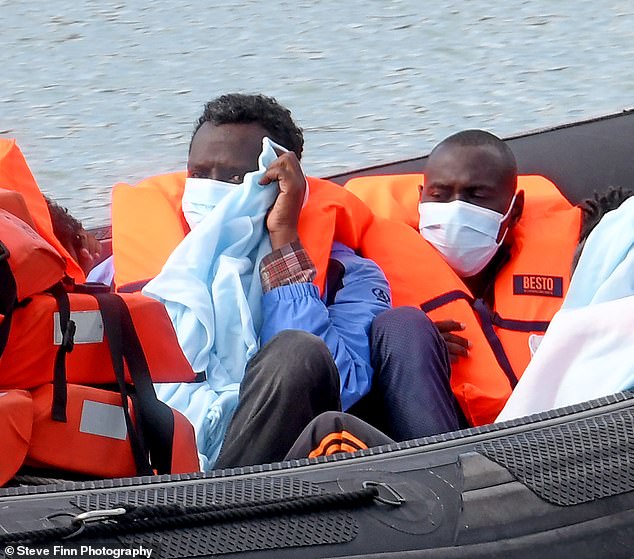 Two dinghies thought to have been used by people crossing the Channel were also observed being towed into the harbour by Border Force.

Both UK and French authorities have been active in the Dover Strait.

Today’s arrivals come after several days where the high winds of Storm Francis rendered crossings dangerous and no migrants are known to have made it to the UK in that time.

It comes after the Ministry of Defence announced that Royal Navy vessels have participated in training with Border Force ‘to evaluate how they might be used to support the Home Office in tackling Channel crossings’.

The MoD stressed that this was still in a trial stage and no decisions on deployment have been made.

Last week it was announced that any migrant children arriving on small boats without family will be left with Border Force after Kent County Council announced it had reached capacity.

Instead, any unaccompanied child asylum seekers will stay in the agency’s Kent Intake Unit at Dover until a place can be found with another local authority.

The Home Office describes the facility as a ‘processing centre’, but charities have raised concerns.

Lawyers acting for Detention Action have written to the Home Secretary, describing the move as an ‘alarming development’.

In the letter, lawyers Duncan Lewis said: ‘Detention Action therefore has significant difficulties identifying what lawful power that you have for holding the children at the Kent Intake Unit.’