What we know about the first UK coronavirus victims: 73% of the original 108 people to die were over 75 and men account for six out of 10 fatalities in England and Wales

Three quarters of the UK’s first coronavirus fatalities were over the age of 75, according to official statistics.

Details of the first 108 people to die from COVID-19 in England and Wales have emerged today in figures revealing deaths outside of NHS hospitals for the first time.

Only one person under the age of 44 was counted among the fatalities and 73 per cent (79 people) were over the age of 75.

The numbers, published by the Government’s Office for National Statistics, revealed that the true death toll of the virus may be 24 per cent higher than NHS data shows.

The ONS recorded 210 deaths up to and including March 20 in England and Wales, during which time the Department of Health tallied only 170.

The higher figure includes anyone who had COVID-19 mentioned on their death certificate, whether it was a direct cause of death or not. Some may not have even been tested.

There are now at least 1,408 people dead in the UK because of coronavirus and more than 22,000 people have tested positive since the outbreak began in late February.

ONS’s figures, which don’t include Scotland or Northern Ireland, have a lag of 11 days because of how long it takes to official register deaths, meaning huge spikes in its data can be expected in the coming weeks as it catches up with the devastating fortnight the UK has just experienced. 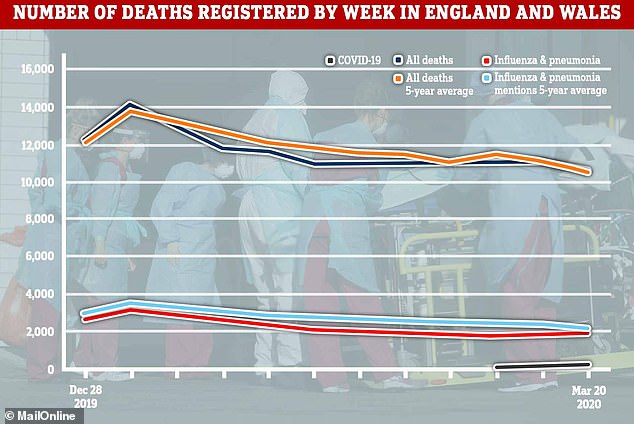 By March 20, ONS statistics revealed today, coronavirus had become a factor in one in every 100 deaths happening in England and Wales 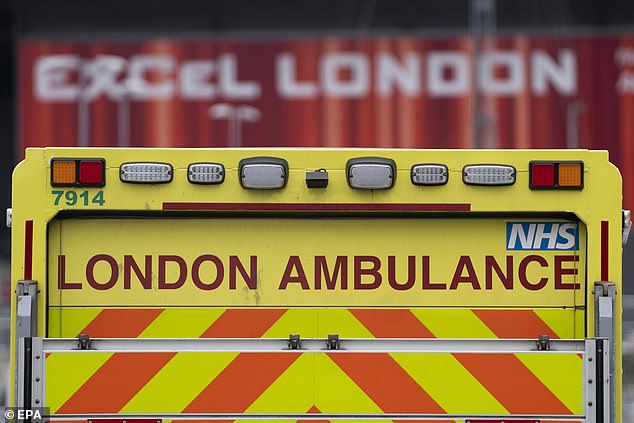 An ambulance is pictured outside the ExCeL conference centre in London, which has been transformed into a temporary hospital for coronavirus patients 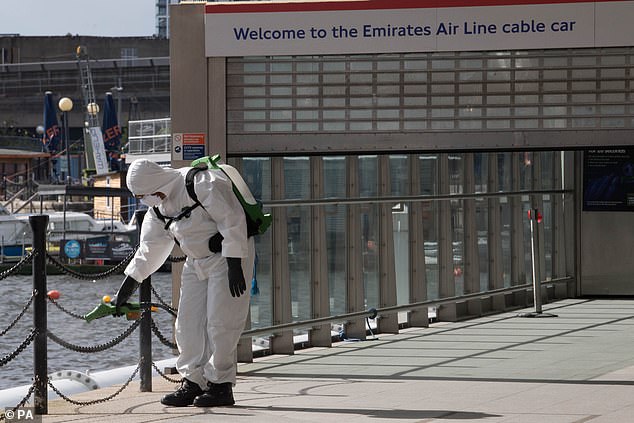 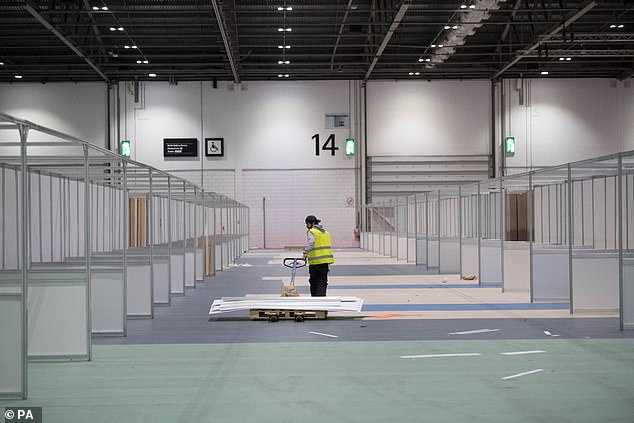 The NHS Nightingale Hospital in Newham, East London, has been put together in a matter of days and will open this week with facilities for at least 500 seriously ill COVID-19 patients

Statistics show the majority of the first coronavirus deaths in England and Wales were among people aged over 85.

The true death toll of the coronavirus outbreak in the UK could be 24 per cent higher than NHS figures show, according to statistics released today.

Patients who had COVID-19 mentioned on their death certificates numbered 210 in England and Wales up to March 20, the Office for National Statistics revealed.

This was 24 per cent higher than the 170 deaths recorded by NHS England and Public Health Wales during the same time frame.

If the ratio has stayed true since that time, the true current number of fatalities could be around 1,739 instead of the official 1,408.

The Office for National Statistics (ONS) has launched a new data series adding in the numbers of people who have died with or after having COVID-19 in the community, including those who died in care homes or their own houses.

Coronavirus was not necessarily the cause of death for every one of the patients, but was believed to have been a factor.

The data does not include Scotland or Northern Ireland – up to March 20, eight people had died in the those countries (six in Scotland, two in Northern Ireland), suggesting the true figure could have been 10.

Anyone who has the virus – for which at least 22,141 people have tested positive in the UK – mentioned on their death certificate will be included in the weekly statistics.

This adds to the daily updates coming from NHS hospitals around the country where adults of all ages are dying in intensive care units.

London had the most deaths of any region, with 44 people succumbing to the disease – 41 per cent of the national total.

Second worst hit was South East England, with 19 deaths – the first recorded hospital death was in a woman in the Royal Berkshire Hospital in Reading.

And there were 16 deaths in the East of England. The North East and South West of England only recorded one death each, and just two happened in Wales.

The ONS’s statistics add an element of detail not provided in current figures from the NHS and Department of Health by keeping a running tally of people’s ages, sexes and location.

It also includes deaths which happen outside of hospitals, but does not clearly divide the data.

Commenting on the release, Professor David Leon, from the London School of Hygiene & Tropical Medicine, said: ‘What ONS has done is important as it starts to provide a more complete picture of the impact of COVID-19 on mortality.

‘However, deaths which have COVID-19 as a cause on the death certificate that occur among people who were not tested for COVID-19 may misclassify them as such.

‘On the other hand untested deaths that were precipitated by COVID-19 may still go unrecognised.’

Professor Keith Neal, from the University of Nottingham, added: ‘I support the reporting of new figures but there is now a danger of the death figures becoming increasingly difficult to interpret.

‘We now have figures for the UK, England and Wales and the four separate administrations.’

Statistics from NHS hospitals and public health authorities show that 1,284 out of the UK’s 1,408 recorded COVID-19 deaths have happened in England.

In addition, 62 people have died in Wales, 41 in Scotland and 21 in Northern Ireland.