Spain has been hit by at least 200 new coronavirus outbreaks since it began easing lockdown restrictions.

A beach in Barcelona, a wedding in Tudela and a Red Cross centre in Malaga are among the places where new clusters have been found in recent weeks, leaving health officials scrambling to carry out mass tests.

Dinner parties, sports events and a summer language school have also been affected by virus outbreaks in a setback to Spain’s efforts to resume normal life after one of the world’s strictest lockdowns.

Spain said on Friday that it had identified 5,695 new cases in the previous seven days, a sharp increase from 2,944 a week earlier. The spike in cases has forced some areas to re-impose lockdown restrictions just as Spain is starting to welcome tourists including British holidaymakers again.

Local authorities have been given powers to take emergency measures such as closing beaches and imposing curfews if necessary.

Here are 20 of the most alarming virus scares that Spain has suffered in recent weeks. 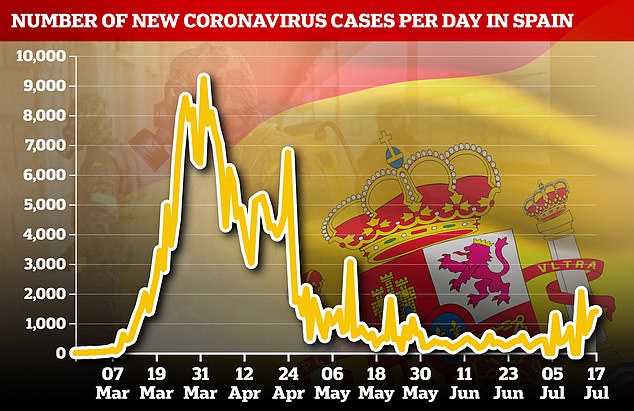 Spain has seen an increase in cases in recent weeks after lifting one of the world’s strictest lockdowns. Spain said on Friday that it had identified 5,695 new cases in the previous seven days, a sharp increase from 2,944 a week earlier. 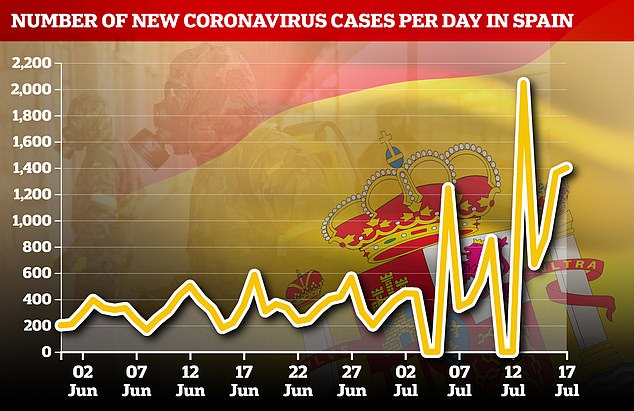 This graph shows how cases have increased since the start of last month. Spain has recently stopped releasing figures at weekends

1. Fourteen workers at a mink farm in Aragon tested positive for coronavirus in an outbreak beginning in May, and the virus has now been detected in the animals as well. As a result, 92,000 minks on the farm in Teruel are having to be put down in the interests of human health. Tests have shown that the infection rate among the minks had reached 87 per cent.

2. Seaside resorts have voiced concerns about the arrival of illegal immigrants because some of them are testing positive for coronavirus. In Navalmoral de la Mata in Extremadura, there was a major scare when a migrant with coronavirus escaped custody on June 17 and affected 24 other people.

3. Castellon in the east of Spain confirmed an outbreak at a San Juan celebration on June 23, when people traditionally celebrate with bonfires, beach parties and gatherings at their homes. At least 16 positive cases were linked to the same family celebration and more than 100 people are being contacted, many from outside the region.

4. One of the worst outbreaks in Malaga occurred in a Red Cross reception centre and led to 108 people contracting coronavirus over a period of three weeks from June 23. Those infected were volunteers, workers, contacts and close family. Health officials had to carry out more than 500 tests in other Red Cross centres.

5. A young woman’s funeral and cremation in Granada led to further misery after a coronavirus outbreak during the ceremonies in Balicena on July 2 and 3. At least 58 people have tested positive among the mourners and their contacts. 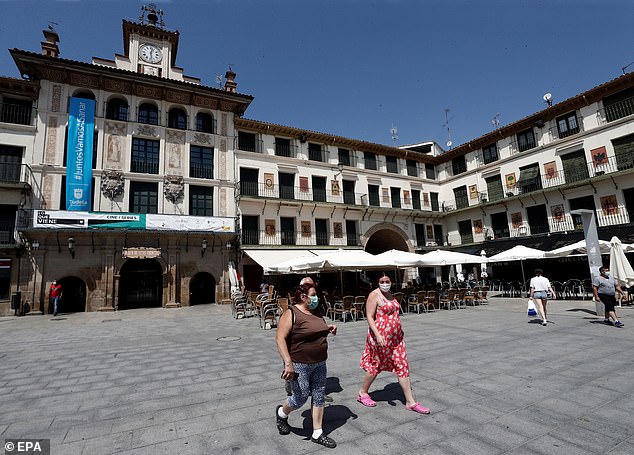 An outbreak was detected after a wedding in Tudela (pictured) where the bride, her mother-in-law and many others tested positive for coronavirus 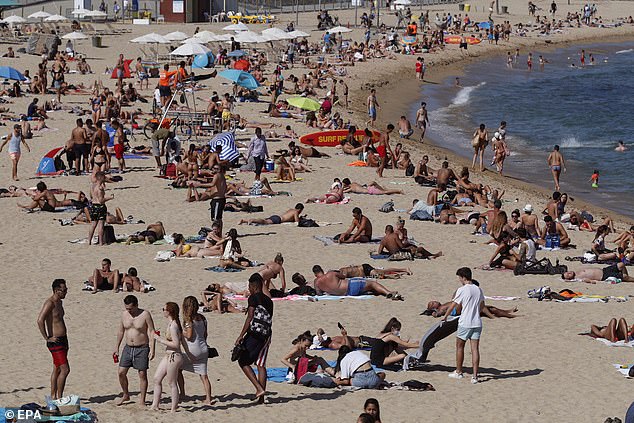 People enjoy the sunshine at La Nova Icaria beach in Barcelona on Friday. A party at a different Barcelona beach in early July led to a dozen youngsters developing symptoms of fever

Mallorca and Ibiza will fine Britons for not wearing masks

British tourists on holiday in the Balearic Islands will be fined £22, £45 or £90 from today if police find they are not wearing a mask.

The new rule in Mallorca, Ibiza, Menorca and Formentera applies to virtually all public places, with the exception of the beach, walking on the seafront promenades swimming pool, countryside or while eating or drinking in a restaurant.

The rule came into force last week with a one-week grace period which expires today.

The level of the fine (25, 50 or the maximum of 100 in euros) will depend on the circumstance and ‘the severity of the breach’.

When police hand out fines, they have been instructed to take precise details and will ask tourists for identification and their name and address, plus where they are staying if appropriate. They will also note where the breach has taken place, the circumstances and the number of people involved.

Police must also specify the degree of intent, what response the person gives when stopped and whether they repeat the offence.

Angry hoteliers and tourism leaders are not in favour of the new order and claim holidaymakers are already being put of going to the islands because of the mask rule.

However, most holiday locations in Spain, including the Costa del Sol, are now also adopting the compulsory measure as Spain battles with daily outbreaks of coronavirus.

6. All 20 residents of an apartment block in Albacete had to go into quarantine for 14 days in early July after nine of them, including five members of the same family, tested positive for coronavirus. A court ruled this to be reasonable because of the risk to health. Three residents admitted to hospital were later discharged and allowed to continue their recovery at home.

7. A July 4 dinner party for eight guests in Madrid has led to five people testing positive for Covid-19. The get-together was held in the capital but had a far-reaching impact because five of them travelled home by train, plane or car after the party. The health department has had to contact 61 other people to tell them to shield.

8. A beach party in Villasar de Dalt in Barcelona is feared to have led to an outbreak after a dozen youngsters developed symptoms of fever and bad stomachs. There were 60 people at the party in early July and test results are now being awaited. Possible virus patients must remain in quarantine until the results come back.

9. After Pamplona cancelled its famous San Fermin bull-running showpiece, people held their own festivities and even ran through the streets running dinosaur costumes. One group of friends fell ill after a gathering on July 6, as did others they had been in contact with in local bars. 24 cases have been confirmed so far.

10. A summer language school had to be called off on July 8 after eight teenagers were found to be infected, along with two of their helpers. All 40 students were sent home into either quarantine or recuperation.

11. A wedding in Tudela went horribly wrong when nearly all the attendees, including the bride and her mother-in-law, later tested positive for coronavirus. More than 280 contacts also need to be traced and tested after the ceremony in early July. So far, there are 41 confirmed cases and more are expected.

12. More than 600 people have been tested in Getaria after numerous people developed the coronavirus in a matter of days between July 9 and 12. The outbreak is being linked to a local bar and health chiefs have warned anyone who has been there to stay in isolation.

13. Ten Galician fishermen had to go into confinement for a week after a visitor who arrived on another boat and helped them unload their catch on July 10 tested positive for coronavirus. Six have been allowed to return home but four have proved positive and have to stay put.

14. More than 400 people are being tested after a group of school pupils went to a nightclub in Cordoba to celebrate the end of their studies on July 11, and one of them subsequently tested positive. At least 36 people have tested positive so far, with contacts also being tested and the pupils and their families forced into isolation.

15. A pair of parties in Gran Canaria and then in Fuerteventura have led to a rare outbreak in the Canary Islands. Ten people have been diagnosed with coronavirus, nine of them members of the same family and one friend. More than 100 people who were in contact with them are having to be tested after the parties on July 12. 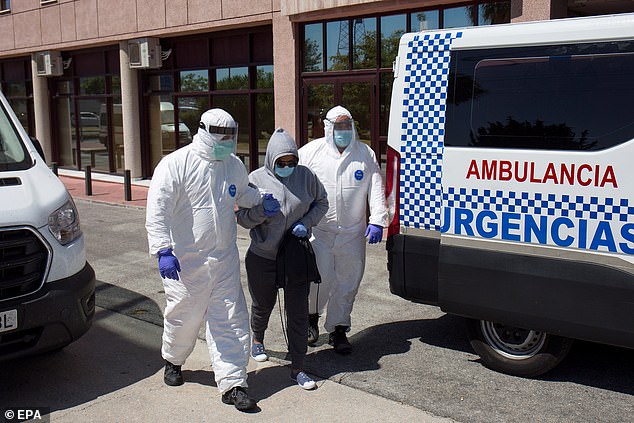 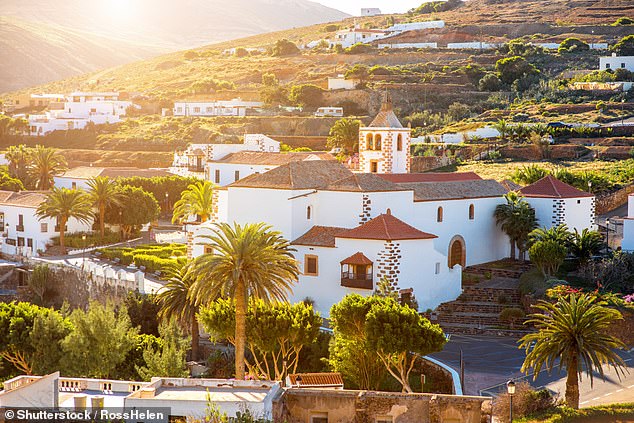 16. Around 250 tourists were trapped at a Basque campsite after two holidaymakers tested positive for coronavirus on July 14. The campsite in the beach resort of Zarautz was immediately closed down. All 250 campers had to take coronavirus tests. It has since re-opened after being given the all clear amid reports that the two cases were ‘imported’ and not caught on the campsite.

17. Forty youngsters who took part in a handball event in Salduero were forced into isolation after one of their coaches suddenly died on July 16 and tested positive for coronavirus in an autopsy. The young players were ordered to take coronavirus tests.

18. A food group which supplies meat to supermarkets had to test 3,000 workers at its factory in Guissona, located in the Lleida province of Catalonia which has been forced back into lockdown. To date, at least 66 staff have been confirmed positive this month.

19. Sixteen people who travelled on a train from Barcelona to Vigo earlier this month are in isolation after a female passenger later became ill with coronavirus. The transport company Renfe had to contact all the passengers who were sitting near her on the train, and they were ordered into home quarantine.

20. Flights are far from immune. In Vigo, 12 passengers on a plane that landed at the provincial capital’s airport from Madrid are in home isolation after a man on the flight tested positive. The Iberia Express flight was full although only a dozen passengers were ordered to be isolated as they sat closest to the infected man. Another outbreak linked to a flight from Bolivia caused the first death in Murcia in 23 days. The victim was a 98-year-old woman residing in Cañada de la Cruz. It is understood she wasn’t on the flight but became infected through contacts.