ONE person was reportedly injured and seven people detained after a shooting in Southlake Mall on Thursday afternoon.

Police swarmed the shopping mall in Atlanta, Georgia, at around 3pm. 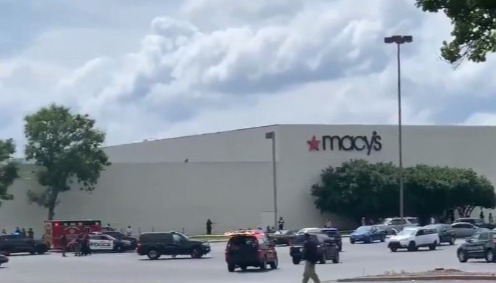 Shoppers fled the building after gunfire was heard, according to bystander footage.

Stores within the mall are reportedly still on lockdown although police say it is not an active shooter situation.

The incident took place in a Macy's and spilled over into the parking area,CBS46 reports.

Witnesses reported one person being taken away on a stretcher and loaded into an ambulance.

Fox5 reported that there was a white car with a broken back windshield in the parking lot.

Officers said that fight broke out between two groups of people and at least 20 rounds were fired.

They added that a man was hit in the inner thigh and has non-life-threatening injuries.

"Like 15 younger kids, they just started running, like I guess they were meeting up at the mall to come shot or come fight," one witness said.

"One of them just starting shooting inside the mall and the whole mall just started to disperse. We started running back into the store to get to safety."