The sun is out, there isn't a cloud to be seen, and yet the sky over New York and the north-east is a milky gray because jet-stream winds are driving smoke from fires in the west across the atmosphere.

The jet stream, a ribbon of air 6.5 kilometers to 13 kilometres above land, can move as fast as 440km/h. People from Washington to Boston aren't facing the poor air quality threatening residents in the west because the smoke remains at high altitudes. 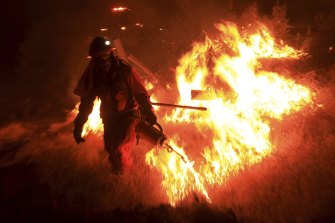 Smoke from fires that have been raging in California has now reached the north-east of the US.Credit:Kent Porter/The Press Democrat

The smoke from fires in the west has reached the east coast, Frank Pereira, a forecaster at the US Weather Prediction Centre in College Park, Maryland, said.

"Here on the east coast, it is being carried by upper level winds. It is all up in the jet stream," he said.

Across the west, smoke from record fires raging from Canada to Mexico has made breathing hazardous.

Air-quality alerts stretch along the west coast covering Washington state, Oregon and California's Central Valley. More than 5 million acres have burned, dozens of people have died and the heart of fire season has weeks to go.

The Pacific north-west may get some relief late in the week and through the weekend as a rain system moves into the region.

"It's a fairly significant rainfall, but I don't think it will be enough to end the situation but hopefully provide some relief," Pereira said. "California is pretty much dry through the next seven days."