According to a snapshot taken on June 27 by the Department of Education, Skills and Employment, there are 414,954 holders of Australian student visas, of whom 109,773 are offshore. 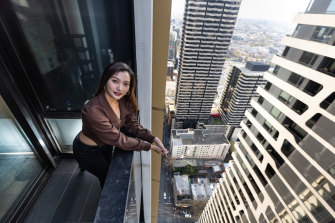 Vicky Ren finished her first year of study with Melbourne University in China online, then came to Australia to complete her final year when borders reopened.Credit:Jason South

More than a quarter of those visas –113,930 – are held by Chinese students, 50 per cent of whom are not in Australia. The snapshot data includes travellers who may be studying in Australia, but are temporarily out of the country.

According to universities and students, people remain offshore for reasons including delays in visa processing, passport renewal, local lockdowns, expensive flights, COVID hesitancy or simply wishing to stay in their own country.

Universities Australia, the sector’s peak body, has predicted universities stand to lose $16 billion by 2023 due to the loss of international students.

Education Minister Jason Clare said COVID hesitancy and a shortage of flights were among the reasons student visa holders were not returning to study in Australia.

Clare said there was 24 per cent drop in the number of Chinese students starting university degrees in Australia in the first quarter of 2022.

“This is our biggest export that we don’t dig out of the ground and it’s been smashed by COVID,” he told Sky News this week.

Vicky Ren, 23, was one of the first international students to arrive in Melbourne after borders reopened.

She finished her first year of a Melbourne University masters of early childhood education online in China, then took advantage of a $4000 grant from the university to come to Melbourne to complete her final year. The university has offered 12,000 such grants.

Ren said she loved living here, but that some international students who chose to study online from their own country already had a job there or had adapted to online learning.

“[Students in my course] all plan to stay here for a long time. I think that’s an important reason why I chose to come back to Melbourne, because of placement and a part-time job,” she said.

“But for others … they just want to study here, maybe not live here, and maybe don’t think they should come back just for a half year,” she said.

Sophie Shen, who returned to Melbourne from China in December to complete her early childhood education degree at RMIT, believes there are several reasons students aren’t returning, including local lockdowns in China, expensive flights and difficulties renewing passports.

Shen said as students could now finish their degrees online, some were avoiding the expensive cost of living in Australia. Others, she said, were still afraid of COVID.

Although international student enrolments are trickling in, Victorian arrivals in April 2022 were at 5930 – down 55 per cent from pre-COVID levels in 2019.

Before the pandemic, overseas students contributed $13.7 billion a year to Victoria’s economy and supported nearly 80,000 jobs, according to figures used by the City of Melbourne.

Melbourne is still a popular place to study – the recent QS Best Student Cities Ranking 2023 ranked it fifth in the world, after London, Munich, Seoul and Zurich. However, before the pandemic, the city was third.

Melbourne Lord Mayor Sally Capp said the council was doing all it could to lure back overseas students.

“Our international students are a huge part of what makes Melbourne such a great place,” she said.

“In addition, we are now offering online studies in semester 2 for students who may not receive their visa in time, therefore the number of international students studying online may increase after the start of semester 2. This is in response to current delays in visa processing,” it said.

Department of Education data shows that in the year to April 2022, 27 per cent of international student enrolments in Victoria were from China and 23 per cent from India.

Melbourne University has 23,000 international students from 49 countries and, according to its 2021 annual report, 40 per cent of its students are international. It is focusing attention on India, sending an 18-person delegation on its first post-lockdown trip there.