Bangkok: Singapore has reported 942 new coronavirus cases, a single-day high for the tiny city-state that pushed its total number of infections to 5992, including 11 deaths.

The number of cases in Singapore has more than doubled over the past week amid an explosion of infections among foreign workers staying in crowded dormitories. This group now makes up around 60 per cent of Singapore's cases. 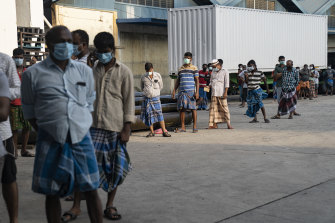 Prime Minister Lee Hsien Loong said on Saturday that it will take time to break the chain of transmission in the dorms. He wrote on Facebook that the vast majority of cases among migrant workers were mild, as the workers are young. Although cases in the dorms are expected to continue to rise amid ongoing virus testing, Lee said the government is building up its healthcare and isolation facilities to handle the load.

More than 200,000 migrant workers from Bangladesh, India and other Asian countries live in dormitories in Singapore that house up to 20 people per room with shared facilities. Tens of thousands of workers have been quarantined in their dorms, while some have been moved to safer places to reduce crowding.

Lee said there were early signs that Singapore's partial lockdown until May 4 is helping to bring the number of new cases down. But he said the government is worried about hidden cases circulating in the population and urged citizens to do their part.

In other developments in the Asia-Pacific region:

– Japan reported 556 new cases on Saturday, pushing its total to over 10,000. Nearly one-third of the cases come from Tokyo, where the daily surge has overburdened hospitals, triggering fears that the medical system will collapse. Prime Minister Shinzo Abe this week expanded his April 7 state of emergency in Tokyo and six urban prefectures to all of Japan. In a news conference on Friday, Abe expressed concern that people were not observing social distancing. He announced a 100,000-yen ($1460) cash handout to each resident as an incentive to stay home.

– China reported 27 new cases, as it tries to stem an upsurge in infections in a northeastern province bordering Russia. Twenty of the new cases were in Heilongjiang province, including 13 Chinese nationals who had returned recently from Russia. The land border with Russia has been closed. China's official death toll rose sharply to 4632, reflecting a major upward revision the previous day by authorities in Wuhan, the nation's hardest-hit city.

– The top leaders of China's ruling Communist Party called for steps to pump up the economy after the biggest downturn since the 1960s in the first three months of this year. A Politburo meeting chaired by President Xi Jinping said on Friday that the government must offset the impact of the pandemic with deficit spending and special bond issues. The world's second- largest economy shrank by 6.8% from a year earlier in the first quarter of 2020.

– North Korea said it has released all foreign nationals from coronavirus quarantine. The North's official Korean Central News Agency also said Saturday that authorities released all citizens who had been quarantined in the provinces of South Phyongan and North Hwanghae, which are near Pyongyang, the capital, and the city of Rason bordering China and Russia. The report didn't specify how many people remained under the country's 30-day quarantine. The North has said there hasn't been a single virus case on its territory, but the claim is questioned by many outside experts.

– The authorities in Myanmar's biggest city have ordered a six-hour curfew in a bid to prevent the spread of the coronavirus. The Yangon Region Government announced that the 10pm to 4am curfew is effective beginning Saturday night. Several of the city's neighbourhoods were put under lockdown, with all people required to stay at home except for essential workers, and with only one person per household allowed out to buy necessary supplies. Public health authorities on Saturday announced the confirmation of six new virus cases, bringing the total to 94, including five deaths.

– Indonesia's coronavirus cases have almost doubled in the past week, with the government reporting 325 new infections on Saturday to bring the total to 6,248, including 535 deaths. The surge has been driven by increasing cases in the capital, Jakarta, which has become the epicentre of the outbreak, recording more than half of the country's total.