It’s official: I am a pensioner. On Monday, just three weeks after submitting my 15 – yes, really – forms and supporting documents, much-maligned Centrelink notified me that my age pension application was successful. 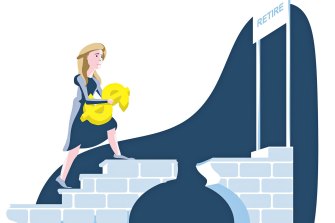 Single women age pensioners who rent are most likely to experience housing stress and live in poverty.Credit:Karl Hilzinger

I hesitated before writing this. I hesitated so long I paused to wonder why I was hesitating. Why was I reluctant to tell my readers, acquaintances, contacts, students past and present, people who might KNOW me. Why, for someone who regularly writes about her life, did this feel an expose too far?

I am entitled to that part-pension. I take issue with Federal Minister for Social Services Anne Ruston who last year told a radio host: “It is a generous amount of money that the Australian taxpayers make available to our older Australians.”

The age pension is neither generous nor a gift from a benevolent government. It is my right, an entitlement financed by my more than four decades of taxes. But this week I realised that with a single text Centrelink had changed my status from one I am was proud of, to that of an old person, a state dependent, someone whom society does not take seriously and cares less about than younger Australians.

I’ve always been proud to say I was a journalist and still am. I’ve held senior positions in three countries – though it wasn’t until I became an academic that my father thought I had a real job. Both jobs carry a certain status. But pensioner – that’s just someone with grey hair, free weekend public transport and complaints about utility bills isn’t it? The butt of bad jokes in old British comedies, thrown a few crumbs at election time…

My one income household working life has enabled me to acquire a freehold house and some superannuation, although not enough to self-fund my retirement. But claiming a pension should not, overnight, make me some kind of second-class citizen. Nor should it for the 72 per cent of age-eligible retirees who get some portion of the age pension, while 42 per cent receive a full pension – a proportion that peaks at age 80, according to 2018 Challenger research.

Many of that group will struggle for the rest of their lives to live on it. How many will have no holiday in 2020, with pandemic restrictions curtailing accommodation discounts and free V/Line trains during October’s Seniors Week.

Single women age pensioners who rent are most likely to experience housing stress and live in poverty, federal Parliament’s Economic Security for Women in Retirement inquiry heard. Its report, A Husband Is Not a Retirement Plan, noted the importance of the age pension in providing economic security for women. They’re more likely to rely on it in retirement because lower lifetime earnings mean lower superannuation balances.

Generally, we don’t value older people in our society. It’s hardly news that there’s age discrimination in Australia, despite laws against it. Just ask someone over 50 trying to get a job. Listen to those challenged about their failure to comply with pandemic restrictions or who suggest herd immunity as a strategy: “only” old people are dying. The clear inference: our lives are worth less.

It’s gratifying that The Age’s "Loved & Lost" series, “in memory and celebration” of those who have died in the pandemic, is ensuring they don’t pass unnoticed except by those who knew and loved them. That they are not “only" another deceased old person. Their stories are inspiring, moving, amusing, educational as we read of the rich and well-lived lives of those who, too often in our fast-paced news cycle, are dismissed as “a resident of aged care" or “a woman in her 70s, or 80s, or 90s”.

I’m not embarrassed about getting old. My age is not a secret. I’m not embarrassed about receiving a part-pension. But I’m pleased and grateful that I’m still being published, that when someone asks, “what do you do?" I can say I’m a journalist and not mention the P word. I’ve no intention of meekly accepting a label that carries the inference I’m now a lesser person, that my life has less meaning, and go quietly into some good night.

Sue Green is a Melbourne writer.