Heartbreaking video has revealed a toddler playing around their mother’s body after she collapsed and died on a packed train in India amid coronavirus lockdown.

Arbina Khatoon, 35, died at Muzaffarpur station, in northern Bihar state, on Wednesday from what her fellow passengers said was hunger, thirst and exhaustion after a punishing 1,000 mile journey.

Khatoon was one of millions of Indian migrant workers who lost their jobs and were left stranded miles from their home villages after the country shut all non-essential businesses as it went into lockdown in March.

In an attempt to get the workers home, the government has been putting on specially chartered trains to take them across the country – but conditions are poor.

In total, nine migrants including a two-year-old child on the same train as Khatoon are reported to have died in just three days this week. 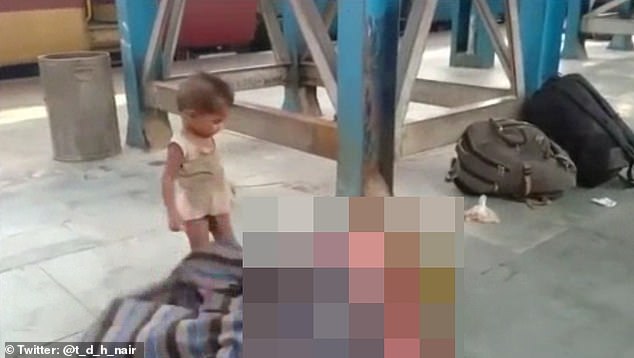 Arbina Khatoon, 35, collapsed and died at Muzaffarpur station in northern India on Wednesday after making a punishing 1,000-mile journey in an attempt to get home amid lockdown

Local media has reported that the deaths were due to exhaustion as migrants were packed on to trains in punishing heat of up to 50C with little access to food or water.

The Indian government has denied this, saying most of the deaths occurred in people with pre-existing medical conditions who had gone to large cities for treatment and were trying to get home.

Local police said Khatoon had died of illness, with Indian Railways sharing a letter from relatives attesting to her poor health.

By the time she died she had already travelled 1,118 miles from western Gujarat state. She was attempting to reach Katihar, another 240 miles away, NDTV reported.

The bodies of two other migrants who took a 920-mile train journey from Mumbai to Varanasi in the nation’s north were pulled from the carriages on Wednesday.

Police said the men, aged 30 and 63, suffered from existing ailments.

The Press Trust of India (PTI) reported an additional five other migrant workers had died on train journeys between Monday and Wednesday. 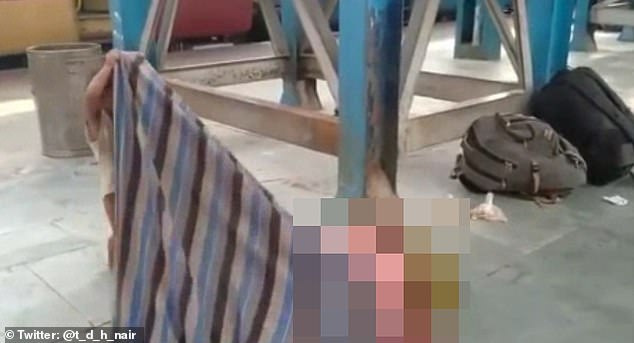 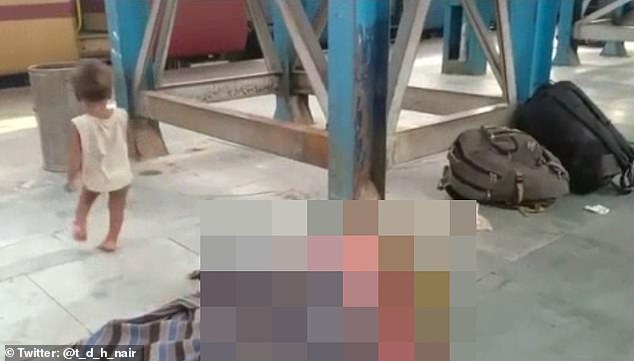 Khatoon is one of millions of Indian workers to have lost their jobs as the country went into lockdown, with many struggling to travel long distances back to their home villages

Indian Railways said on Twitter that ‘no such deaths due to hunger have been reported’.

‘In most of these cases, it is found that those who died are old, sick people and patients with chronic diseases, who had actually gone to big cities for medical treatment,’ an India Railways spokesperson told PTI.

Millions of India’s poor including migrant workers have been badly hit by the strict lockdown, with many in cities losing their jobs, going hungry and struggling to return to their home villages.

Some have walked or cycled long distances home in harsh summer heat, with dozens dying from exhaustion or accidents.

Critics say the special trains have been delayed, leaving migrants waiting or in trains in scorching hot weather for days, and that there had been a shortage of food and water on the journeys, charges that Indian Railways and the government deny.

In total, India has reported 158,613 cases of coronavirus and 4,540 deaths from the disease. Its daily infection totals are now some of the highest in the world. 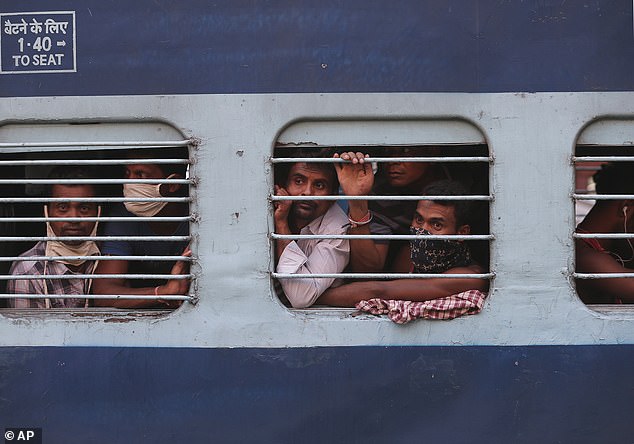 India has been putting on specially-chartered trains to take migrant workers home, but nine – including a two-year-old child – have died this week alone amid overcrowding 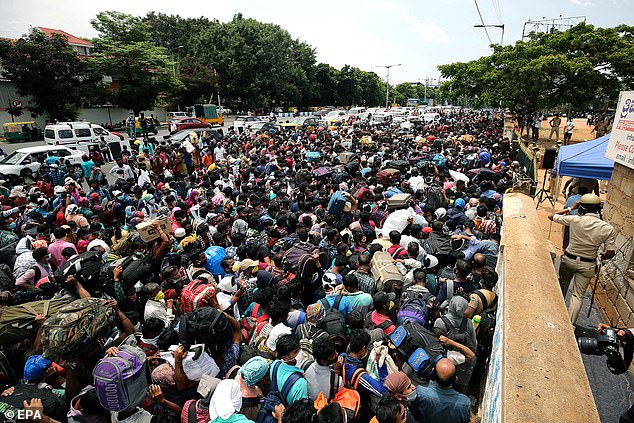 Local media reports migrants have died of thirst, hunger and heat exhaustion in temperatures of up to 50C as they attempt to get home – but the government has largely denied this 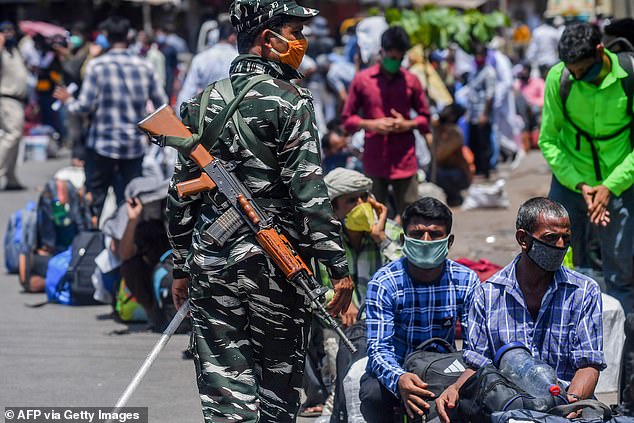 Ministers say most of the migrants who have died had pre-existing health conditions (pictured, an armed guard at a station in Mumbai)

Prime Minister Narendra Modi’s government is preparing a new set of guidelines to be issued this weekend, possibly extending the lockdown in worst-hit areas as it promotes economic activity.

It said the recovery rate has also risen to more than 42% .

Mumbai, India’s financial and entertainment capital, is the worst hit city in the country with more than 33,000 cases and nearly 1,200 deaths.

Most of the cases are concentrated in Maharashtra, Gujarat, Tamil Nadu New Delhi, Madhya Pradesh and Rajasthan states.

An increase in cases have also been reported in some of India’s poorest eastern states as migrant workers stranded returning to native villages from India’s largest cities have begun arriving home on special trains.

India started easing lockdown restrictions earlier this month, allowing reopening of shops and manufacturing and resumption of some trains and domestic flights and vehicles’ movement. 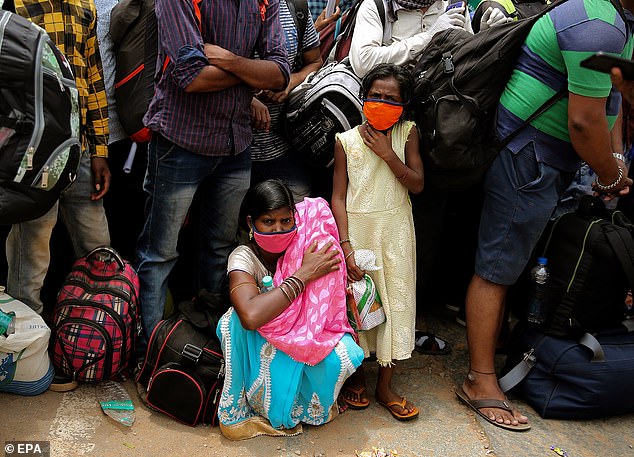 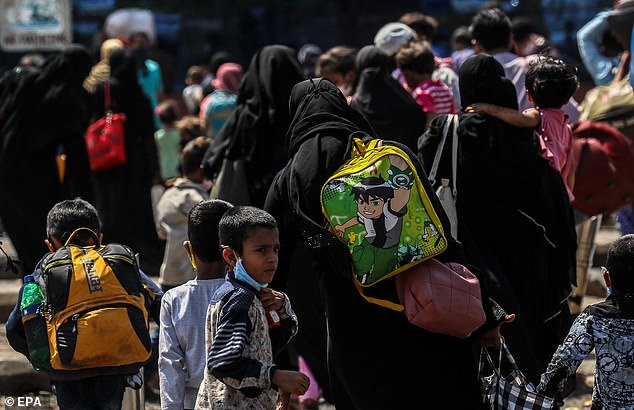 Migrant workers often live in the factories where they work, but with the businesses closed they have little choice but to attempt the journey home