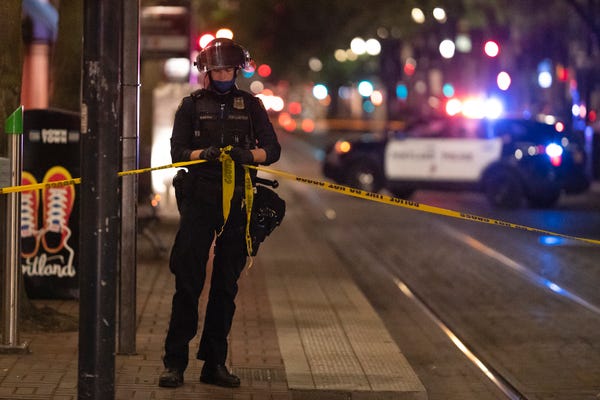 Police are investigating Michael Forest Reinoehl in connection to the deadly shooting of right-wing demonstrator Aaron Danielson in Portland Saturday night, according to The Oregonian.

Reinoehl, a 48-year-old white man and self-described anti-fascist, was accused of bringing a loaded gun to a Black Lives Matter protest in July, The Oregonian reported.

Danielson was a reported supporter of Patriot Prayer, a group of alt-right activists, which clashed with Black Lives Matter protesters Saturday. After Danielson was shot in the chest and died, video footage shows a man who resembles Reinoehl leaving the scene, a family member told The Oregonian.

In a June 16 Facebook post cited by The Oregonian, Reinoehl described himself as "100 % ANTIFA all the way!" and said that protesting was "where the fight starts."

"If that's as far as you can take it thank you for your participation but please stand aside and support the ones that are willing to fight," he wrote, adding: "We do not want violence but we will not run from it either! … Today's protesters and antifa are my brothers in arms."

His sister, who had asked the paper not to be identified by name, said she was woken Sunday by a phone call where she and her family were threatened unless they turned Reinoehl over to police.

The call was how she learned about her brother's possible involvement in the shooting, the paper reported.

After reviewing screenshots from the scene, she called detectives and told them that the man was her estranged brother, she told the Oregonian.

The recent shootings of Black Americans — including George Floyd, Breonna Taylor, and Jacob Blake — have sparked unrest around the country.

In Portland, demonstrations have taken place nightly for more than three months. Some have been attended by alt-right counter-protesters.

Reinoehl, who identifies himself on Facebook as a former professional snowboarder, had previously posted photos and videos of several anti-racism demonstrations he's attended on Instagram, including personal injuries he's sustained.

Tonight's battle scar thanks to an nasty bean bag shot at me from 20 feet away!#blaklivesmatter #breonnataylor #anewnation

He accompanied them with the hashtags #blacklivesmatter and #breonnataylor.

In June, Reinoehl was arrested after racing against his 17-year-old son at more than 100 mph, police said.

Reinoehl, who was driving a Cadillac, was charged with driving under the influence of a controlled substance, according to the Baker City Herald. An unlicensed concealed Glock pistol and his 11-year-old daughter were found in the car, the paper reported.

His teenage son was also arrested.

Just under a month later, Reinoehl found himself in trouble again, when he attended a demonstration in Portland on July 5. Reinoehl was cited for carrying a loaded gun in a public place, resisting arrest, and interfering with police, according to The Oregonian. The charges were later dropped.

Reinoehl's sister told The Oregonian that her brother has been estranged from their family for about three years.

Photos posted to Michael Reinoehl's Instagram show that he leaned into instances where demonstrations escalated to violence.

Two months ago, he posted a photo of bruising on his torso.

"Tonight's battle scar thanks to an nasty bean bag shot at me from 20 feet away!" he wrote.

Around the same time he posted a screenshot of a conversation in which someone warned him that "a Patriot group" would be attending a July 4 protest and could be armed and hostile.

"Thank you my friend we are ready," he responded.

An attempt to reach Reinoehl by phone on Monday was not successful.

Read the original story in The Oregonian »»