Stockholm: Sweden remains steadfast in its strategy of voluntary measures and no lockdowns, the architect of its unorthodox COVID-19 response said, as the country battles a growing second wave of a disease that has now killed more than 6000 Swedes.

The Nordic nation of 10 million people, whose soft-touch approach to combating the coronavirus has drawn worldwide attention — and harsh domestic criticism from some — has seen a surge in the number of cases, hospitalisations and deaths in recent weeks.

At 5990, the number of new cases reported on Friday (Saturday AEDT) was the highest since the start of the pandemic. A further 42 deaths were also recorded, the most for around three months. 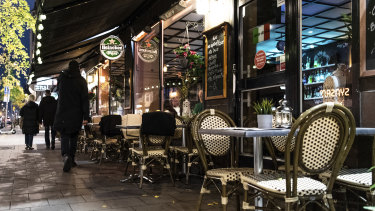 People pass a restaurant in central Stockholm, Sweden, on Sunday. THe country’s strategy will not change despite a worsening second wave of COVID-19.Credit:TT/AP

The strategy, however, will not change.

"No, we will keep on this path," Chief Epidemiologist Anders Tegnell told Reuters in a telephone interview. "This is how we work in Sweden. We have a big understanding [of] this and a huge adherence to the rules."

In contrast to many other countries, the country has kept schools, restaurants and other businesses open throughout the pandemic. Instead, it has focused on voluntary measures aimed at promoting social distancing and good hygiene, such as working from home if possible, avoiding public transport and crowded indoor activities. 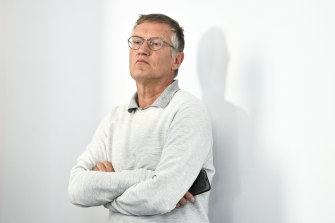 The approach has drawn both criticism and praise. Tegnell's frequent press conferences have attracted big television audiences. Several people have had his face tattooed on their bodies and t-shirts saying "In Tegnell we trust" can be spotted on the streets of Stockholm.

But Tegnell has also even received death threats from people accusing him of pursuing a reckless policy.

In an open letter published in the daily Aftonbladet newspaper on Friday, 27 Swedish scientists and doctors warned the country could soon approach the sort of numbers in intensive care seen in the northern spring and called on party leaders to override the Health Agency and introduce tougher restrictions.

The country has recorded 485 cases per 100,000 people in the latest two-week period, roughly the same as Britain but just more than half that of France.

Tegnell played down the criticism and said the recent lockdowns in Europe, which for the most part have been less strict than those in the spring, showed there was less of a difference in approaches to fighting the virus now.

"Most countries are now trying to do it a bit more like we have done in Sweden. Almost no one is closing schools now, for instance," he said. "We have also learnt a lot [from others], like doing targeted recommendations for different regions."

It is one of few countries in Europe that does not recommend or demand masks outside hospitals and care facilities. Tegnell said he had yet to see any good studies in favour of masks, despite it being recommended by the European Centre for Disease Control and many other health bodies.

"It's fascinating how few studies there are on this. And if you look at the countries with strict rules for wearing masks, it's difficult to see that they have fared well," he claimed seemingly unaware of Australia’s success.