A primary school in England has been forced to close after a member of staff tested positive for coronavirus.

Thorpe Primary School in Idle, Bradford, joins a number of schools to have to shut as pupils prepared to head back to the classroom.

The school told parents it would have to close on Saturday, pushing back its reopening until June 8, according to Yorkshire Live.

Parents were told by the school: ‘We have been informed today that a member of our staff has tested positive for COVID-19.

‘Therefore any key worker parent or parent of a vulnerable child who is planning to send their child back to school on Monday 1st June will not be able to do so. 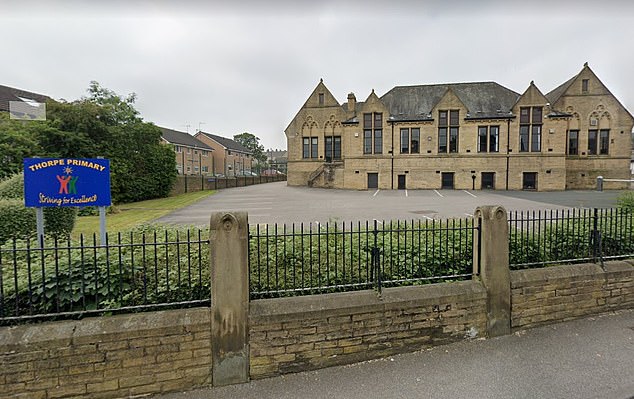 Thorpe Primary School in Idle, Bradford, is thought to be the second school to have to shut as pupils prepared to head back to the classroom, after staff tested positive for covid-19

‘They should self isolate for another seven days.

‘We will reopen on the June 8 for key worker and vulnerable pupils then.

‘Thank you for your support and understanding.’

A spokesman for the Derby Diocesan Academy Trust confirmed the school had been closed ‘due to a number of staff having confirmed cases of COVID-19’.

He said all seven members of staff have only had mild symptoms and are recovering well at home. 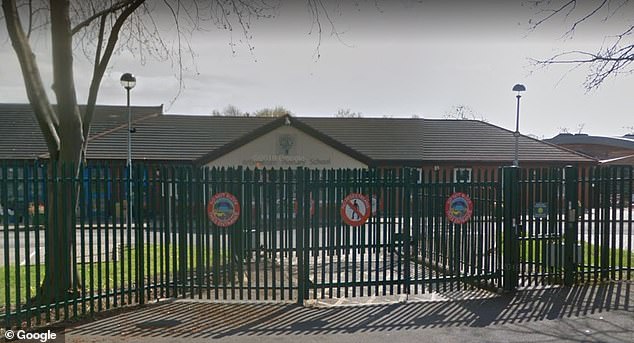 Arboretum Primary School, in Derby, has also been closed after seven staff members tested positive for coronavirus as the school planned to return

The Trust spokesman told DerbyshireLive : ‘Following one member of staff reporting symptoms, the school quickly identified any other members of staff, parents/carers and/or children who may have been in contact and instructed them to isolate for the Government’s recommended period of 14 days.

‘The trust is pleased to confirm that all members of staff affected have experienced only mild symptoms and are recovering well at home.

‘In line with guidance, the school has closed this week to allow a deep-clean to be completed and will re-open next week, initially to children of key workers and vulnerable children.’

It is understood the school has been open to key worker and vulnerable children from other schools, including Derby Cathedral School, since lockdown began on March 23.

A Derby City Council spokesman added: ‘The school will re-open on Monday, June 8 and all of those adults who may have been in contact with the affected staff have been informed.’

Boris Johnson had announced last month all children in Reception and Years 1 and 6 would return on June 1, during a briefing last month. 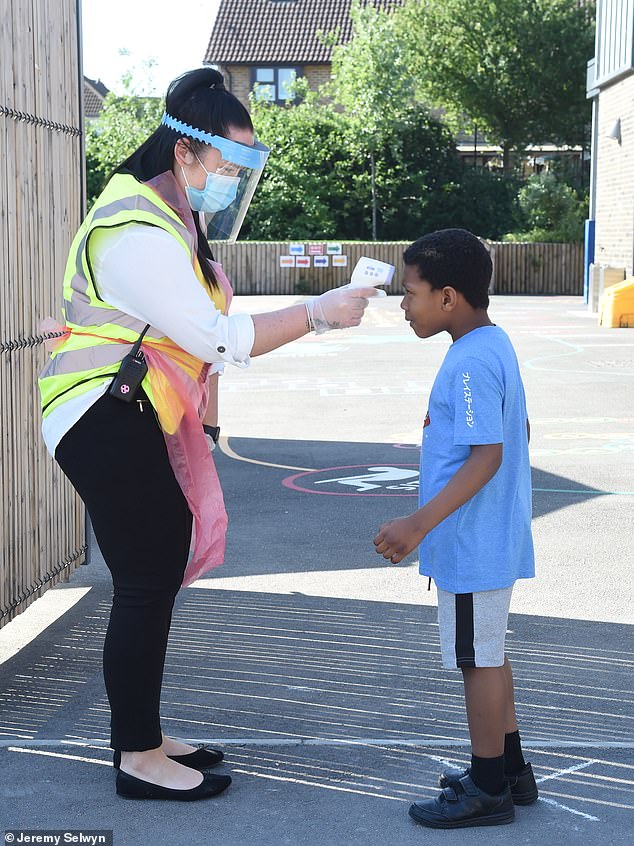 A child has his temperature taken at Harris Primary Academy in south London on Monday, as schools around the country started to make a return to the classrooms 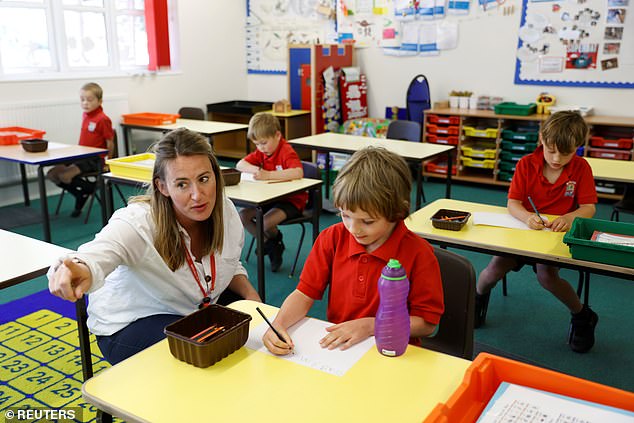 A teacher talks to a child at Watlington Primary School, Oxfordshire, with other pupils socially distanced on the day that thousands returned to classrooms

Indications suggest the number of pupils back in the classroom varied significantly depending on the region.

Half of parents might keep their children at home, while more than 20 councils across England – predominantly in the north – are advising schools not to open to more pupils this week, surveys found.

At least 54 councils in England have taken the side of teaching unions, who have argued it is not yet safe for its members to return to schools amid the ongoing coronavirus pandemic.

The councils have either told schools not to reopen this week, or left the decision up to headteachers.

It meant as few as ’40 per cent of eligible primary pupils’ returned to classes on Monday, with around 550,000 staying at home, as schools stayed shut, turned children away or even held ‘staff training days’.

The Association of School and College Leaders said that of the facilities that are open attendance is ‘highly variable’ and ranges between ’40 per cent and 70 per cent’.