Washington: Neanderthals weren't the club-wielding brutes of popular legend, hunting and eating only woolly mammoths in frozen northern climates. A new study, for the first time, suggests they were skilled fishermen and that seafood was a key ingredient in their diets.

In fact, more than 80,000 years ago, Neanderthals were feeding themselves regularly on fish and other marine life. The first evidence of this has been found in the coastal cave Figueira Brava, 30 kilometres south of Lisbon, Portugal. 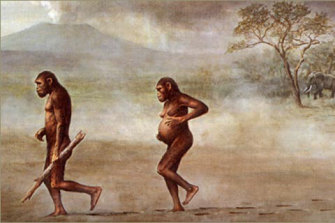 Filled with fish bones and crustacean shells that researchers say were left behind by Neanderthals, the cave "provides the first record of significant marine resource consumption among Europe's Neanderthals," according to the study.

The new study reveals fishing and shellfish gathering contributed significantly to the subsistence economy of the Neanderthals. Up until now, the use of the sea as a source of food at that time had only been attributed to modern humans (Homo sapiens) in Africa.

In addition to land-based foods, the study suggests that the Neanderthal diet also included mussels, crustaceans and fish as well as waterfowl and marine mammals such as dolphins and seals. Food from the sea is rich in omega-3 fatty acids and other fatty acids that promote the development of brain tissue.

"If this common consumption of marine resources played an important role in the development of cognitive skills, it did so on the entire humanity, including Neanderthals, and not only the African population that spread later," said study lead author Joao Zilhao, a researcher at the University of Barcelona. 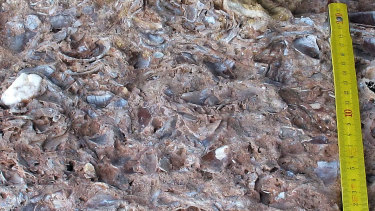 Mollusc shells and other seafood fragments discovered in the Figueira Brava cave.Credit:Joao Zilhao/University of Barcelona

"Among other influences, this could also explain the early appearance of a culture of modern people that used symbolic artefacts, such as body painting with ochre, the use of ornaments or the decoration of containers made of ostrich eggs with geometric motifs," explained study co-author Dirk Hoffmann of the University of Gottingen in Germany. 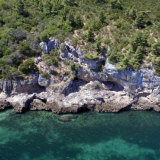 The Figueira Brava Cave in southern Portugal.Credit:Joao Zilhao/University of Barcelona

"Such behaviour reflects human's capacity for abstract thought and communication through symbols, which also contributed to the emergence of more organised and complex societies of modern humans."

Zilhao's study also found that along with seafood such as mussel, clams, brown and spider crabs, shark, eel and sea bream, 50 per cent of the diet of the inhabitants of Figueira Brava was made up also of birds and mammals (dolphins, seals).

"This was completed with the hunt of deer, goats, horses, aurochs and other small preys such as tortoises," it found.

In the cave researchers also found carbonised plants including olive trees, vines, fig trees and other Mediterranean climate species. "Pine forests were exploited as fruit tree gardens: mature pines, albeit closed, were taken from the branches and stored in the cave, where the fire could open them". 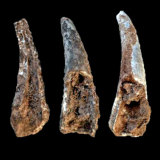 Cracked-open and burnt fragments of pincers of the edible crab (cancer pagurus) found in the cave.Credit:Joao Zilhao/University of Barcelona

The findings add to recent evidence that Neanderthals had "surfers' ear" and may also have dived to collect shells for use as tools, according to the Guardian. Previous finds in Spain have shown they decorated seashells and were producing rock art 65,000 years ago.

"Forget about this Hollywood-like image of the Neanderthal as this half-naked primitive that roamed the steppe tundra of northern Europe hunting for mammoths and other megafauna with poor and inefficient weapons," Zilhao told the Guardian. "The real Neanderthal is the Neanderthal who is in southern Europe."

The study was published in the peer-reviewed journal Science.