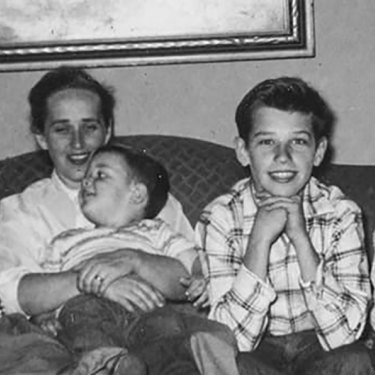 Joe Biden, second from right, is the eldest of four children.

On a tree-lined street in north-east Pennsylvania, where picturesque houses proudly display the American flag, sits a rustic sandwich shop with a cardboard cut-out of the man vying to be the next US president.

The life-sized prop of Joe Biden is dressed in a dark suit and orange tie, his Washington attire looking somewhat out of place surrounded by retro decor, baseball souvenirs and black-and-white photos of a simpler time, long before COVID-19. 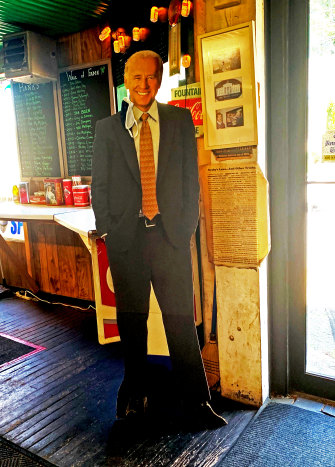 A cardboard cut-out of Joe Biden at a sandwich shop in his childhood home town Scranton.Credit:Farrah Tomazin

This is Biden’s childhood turf: the small regional city of Scranton that was once home to generations of coal miners and rail workers, but has since become a central battleground in one of the most consequential US elections in history.

“He comes to visit now and then,” says shop assistant Alyssa Owens, whose family run the Hanks Hoagies sandwich shop where Biden’s cardboard image has pride of place near the main entrance.

“Whenever he’s here he always goes to visit his old house down on North Washington Avenue to say hello to the lady that lives there. It’s very sweet. We hope to see him again soon, though – before his big day!”

That big day is less than eight weeks away, when Americans finally decide whether to give Trump another term or hedge their bets on the former vice-president once described by Barack Obama as the “scrappy kid from Scranton who became Delaware’s favourite son".

Pennsylvania is no longer Biden’s home, a fact that Trump has consistently cited to accuse him of “abandoning” the area. He lived in Scranton until he was 10, when his father, who had been commuting to Wilmington to clean boilers for a Delaware heating and cooling company, decided to move the whole family there. 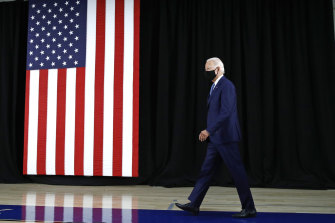 But both candidates know that the rust-belt state is a crucial part of their path to victory, along with the mid-west battlefields of Michigan and Wisconsin.

In the past fortnight alone, Trump, Biden and Vice-President Mike Pence have made at least eight campaign stops in Pennsylvania, aggressively trying to accuse their rival of failing workers while talking up their own ability to bring back local jobs in the wake of the pandemic-fuelled recession.

The stakes are high: Democrats held Pennsylvania for 24 years until Trump surprisingly won the state – which holds 20 crucial electoral college votes – by 0.7 percentage points in 2016.

The conventional wisdom is that Hillary Clinton fell short partly because her campaign took the region for granted, while Trump was able to garner the support of rural and working-class voters outside the major cities like Philadelphia and Pittsburgh.

The big question now is: does Biden have what it takes to win them back?

Jack Sweeney, the owner of Scranton Hobby, a train hobby business set up in 1929, is cautiously optimistic. 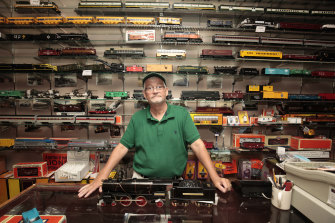 The affable 63-year-old, who has lived in Scranton all his life, voted for Clinton at the last election but admits he didn’t find her particularly appealing.

Biden, however, seems like a “great guy” who could heal a bitterly divided nation, and “I really hope most of the country feels the same way".

“I think he should win since our current President can’t keep his mouth shut and gets himself in trouble,” says Sweeney, as he gently assembles several boxes of model trains on the counter of his shop in downtown Scranton.

“But there are a lot of people that love Donald Trump – even if they don’t tell you – which is why I think this election is going to be very, very close.”

Travelling around the streets of Scranton this week, Sweeney’s theory rang true.

FiveThirtyEight’s latest polling average has Biden ahead by 5.1 percentage points. But while much of the city certainly leans left (the larger pockets of Trump supporters are in the neighbouring rural counties of Luzerne and Wyoming) not everyone is convinced that 77-year-old Biden is the answer. 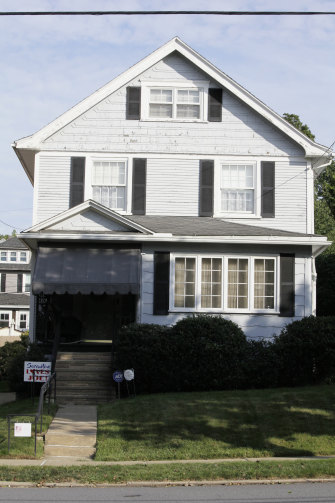 Some point to Trump’s ability to “get things done” as part of the reason they would for vote for him.

“Maybe he hasn’t handled himself the right way in terms of being a gentlemanly, cordial version of a president, but I’d rather a president who’s blunt and does the things that he says he’s going to do,” says Shane Peters, who grew up in the Philadelphia suburb of Kensington and now works part-time as an Uber driver.

Others raised concerns about Biden’s record, in which he supported the North American Free Trade Agreement and the Trans-Pacific Partnership – deals that Trump often argues were disastrous for local workers, wages and factories.

“Do you think we could have made the inroads that we made with NATO, China, with trade, under Barack Obama?” one man asked, providing his first name only as Dave.

“No way in the world. People are waking up. They’re seeing the possibilities of having a liberal, socialist country. Can you imagine?”

Nestled in the seat of Lackawanna County with panoramic views of the surrounding mountain ranges, Scranton was made famous as the backdrop to the hit TV series The Office.

But its history is etched in the development of iron, coal and rail, and it earned the name “the Electric City” after the nation's first successful continuously-operating electrified streetcar system was established in 1886. 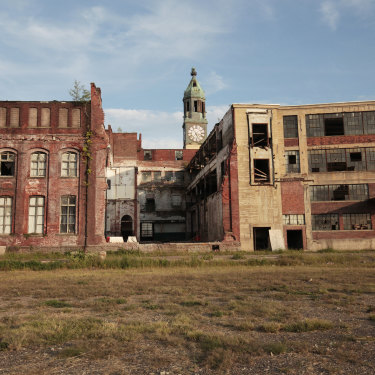 Today about 77,000 people live in the region, working in industries such as retail, hospitality and “eds and meds” (universities and hospitals).

But what makes the electoral contest here so hard to predict is that Scranton is a bit of an outlier, voting Democratic in every presidential election since 1984.

About two-thirds of its population is white, many are working class or ageing, and about 14 per cent of its economy is manufacturing-based.

This would generally make the area ripe for Republicans but even though much of Pennsylvania has grown more conservative, Scranton – at least for now – has bucked the trend.

“It's about two-to-one registered Democrats to Republicans,” says Dr Jean Harris, a professor of political science from the University of Scranton.

“But the numbers are getting closer, so there have been many efforts to get people registered to vote. Voter turnout will definitely be the key.” 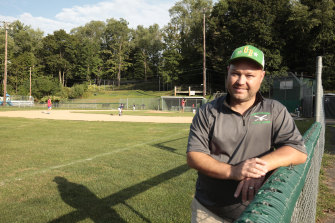 Kevin Wilson, president of the Green Ridge Little League in Scranton, where Biden played as a kid.Credit:Ed Eckstein

The issues that resonate here are nonetheless similar to much of America. Parents want their kids to return to school or college safely after months of distance learning. Older residents want to ensure that healthcare and social security remain on the agenda.

And just about everyone wants to know how Trump or Biden plans to reverse the job losses and economic contraction brought on by the pandemic, which has so far claimed more than 190,000 American lives and left millions more struggling to make ends meet.

Bob Durkin, who heads Scranton’s Chamber of Commerce, knows this only too well. There’s a pensive sadness in his voice as he talks about how Scranton was punching above its weight until COVID-19 shutdowns began in March.

New jobs were flowing into the area as companies chose to relocate their businesses; residential buildings were filling up as more people made the most of the city’s affordable housing; and the warehouse district around Penn Avenue had also been completely revitalised, with thriving new bars, clubs and alfresco restaurants.

“Now," he says, “many are just hanging on by their fingernails.”

Durkin hopes the presidential debates at the end of the month will ensure that both candidates can spell out a plan for America, with Scranton particularly ripe for further investment in infrastructure, manufacturing, technology development, education and healthcare.

What he doesn’t want to hear, however, is either candidate promising to bring back coal mining – a pledge Trump made in 2016, but one which he notes is not even geologically possible after the Knox Mine Disaster of 1959.

Back in Biden’s old neighbourhood of Green Ridge, local residents are optimistic that political change is on the horizon.

Manicured lawns and weatherboard porches are adorned with Biden-Harris signs, promoting the presidential nominee and his running mate, Kamala Harris.

Biden’s old house on North Washington Avenue also displays a sign – “Scranton Loves Joe” – as well as a laminated message welcoming people to take a photo “and be sure to Vote for Joe!”. 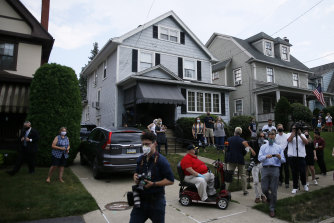 Supporters and media gather outside the childhood home of Democratic presidential candidate Joe Biden during a visit by the former vice-president in July.Credit:AP

And at the Green Ridge Little League, where the Democratic nominee used to play baseball as a child, there's a sense of excitement in this tight-knit community that maybe – just maybe – the next US president could be one of their own.

“It’s kind of a big deal when he’s around and there’s always a bit of buzz when we know he’s going to be here,” says president Kevin Wilson, who lives near Biden’s old family home.

“Certainly in our neighbourhood, some people would be pretty happy if he won.”

Our weekly newsletter will deliver expert analysis of the race to the White House from our US correspondent Matthew Knott. Sign up for the Herald‘s newsletter here, The Age‘s here, Brisbane Times‘ here and WAtoday‘s here.