School districts in counties where a majority of voters cast their ballots for Donald Trump in the 2020 presidential election are more likely to have students back in classrooms, according to a website that tracks reopenings.

The Return to Learn Tracker – a joint venture between the American Enterprise Institute and Davidson College – is monitoring more than 8,000 public school districts as to whether they are operating with full in-person, hybrid or remote-only instruction.

As of mid-March, 49% of school districts in counties that voted for Trump are operating fully in-person, while 47% are hybrid and 4% are remote-only. 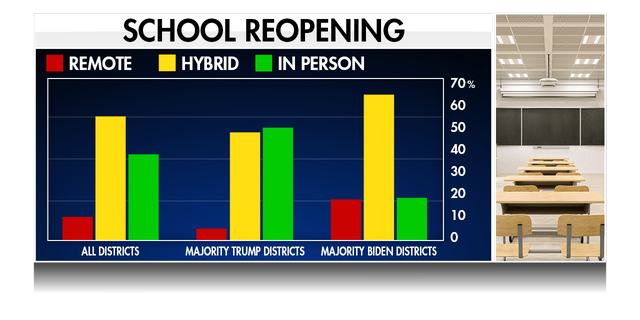 Schools districts in counties that voted in favor of Donald Trump during last year’s presidential election are more likely now to be offering fully in-person learning, according to data from the Return to Learn Tracker. (Fox News)

WHERE ARE SCHOOLS REOPENING FROM CORONAVIRUS CLOSURES? SEE THE MAP

That is compared to just 18% of districts in majority-Biden counties that are operating fully in-person, the data shows. In those areas, 64% of districts are opting for a hybrid learning model, while 17% remain remote-only.

Last July, Trump said his administration would “very much put pressure” on governors to reopen schools in their states in the fall.

“I disagree with @CDCgov on their very tough & expensive guidelines for opening schools,” Trump had tweeted at the time. “While they want them open, they are asking schools to do very impractical things.” 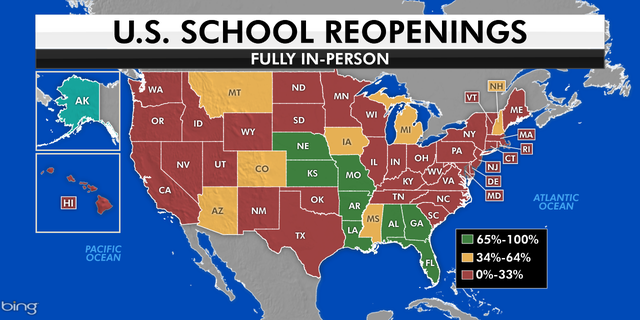 More in-person learning is happening in Florida compared to any other state in the U.S., the data shows.

But Trump’s call to open schools quickly received pushback from Democrat governors like Jay Inslee of Washington and Gretchen Whitmer of Michigan.

Nationwide, out of all the districts tracked, 37% are operating fully in-person, 54% are opting for a hybrid approach, and 9% are remote-only, the Return to Learn Tracker says.

As of mid-March, Florida leads the nation with 100% of its districts operating fully in-person, followed by Georgia with 86.1% and Nebraska with 81.7%, the data shows. 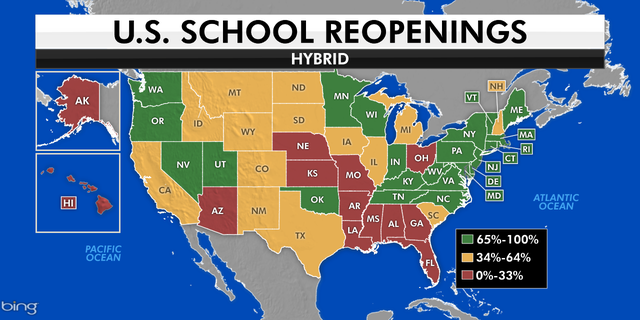 Overall, states across the South and Southeast are offering the most full-time, in-person learning.