A schizophrenic who stabbed a young mother seven times in the face and neck in a random attack as she pushed her child in a buggy has been jailed for life for attempted murder.

Mark Brazant, 44, ambushed married mother Josephine Conlon, 36, narrowly missing her jugular vein as he slashed at her in Streatham on December 30.

He had been released from prison just six days before, having served a jail term for three counts of battery and one count of common assault on women.

Brazant was handed a life sentence today at the Old Bailey with a minimum hybrid hospital and custodial term of 11 years for attempting to murder the mother.

Despite his history of violence against vulnerable females he was previously free to prowl the streets after his supervisors failed to meet him at the prison gates.

Footage released last month captured Brazant and his victim walking past one another on Streatham Hill, before he stops outside a shop, turns and walks after her. 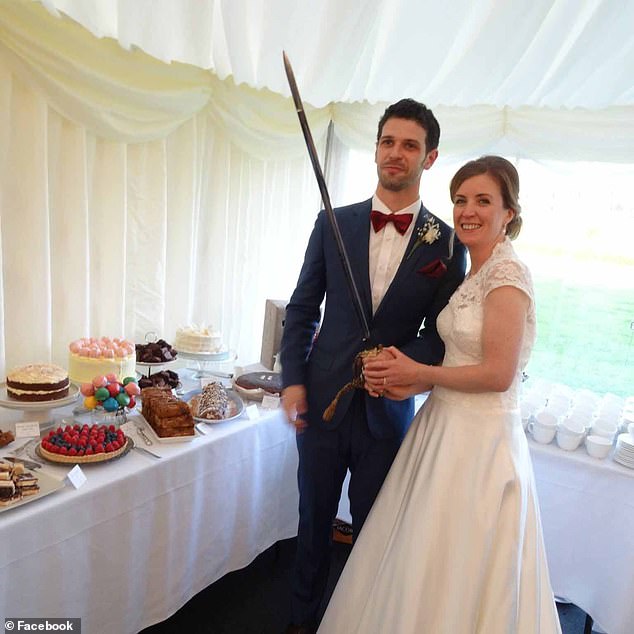 Josephine Conlon, 36, pictured with husband Greg, was ambushed by violent thug Mark Brazant, 44, in Streatham on December 30, just days after he had been released from prison

CCTV footage from December 30 showed the moment she crossed paths with Brazant in the street, prompting the defendant to follow her on her way home after meeting other new mothers at a local bakery.

Brazant – who the Judge said had a ‘deep-seated’ hostility towards women – shoved her to the ground from behind, stabbed her, and left her for dead as she let out blood curdling screams down the phone line.

Previously, the court had heard how Brazant, who has paranoid schizophrenia, had a history of attacking lone women for no reason and had a conviction for carrying a blade.

In January 2017, he collided with a woman, swore at her, grabbed her arm and shoved her away.

On November 26 last year, Brazent attacked four women on the same day, grabbing one by the neck after accusing her of smiling at him, and punching another for laughing.

He pleaded guilty to three charges of battery and one of common assault, but was released on licence from Thameside Prison on Christmas Eve to spend a year on post-sentence supervision.

He initially denied attempted murder, but later changed his plea during the trial.

Brazant had already pleaded guilty to one count of possession of an offensive weapon, and three counts of pointed/bladed articles at the beginning of the trial.

While he admitted stabbing her multiple times with a kitchen knife, the court heard he was ‘acutely psychotic’ – having suffered from schizophrenia and a personality disorder since his early 20s.

Today, he sat in the dock wearing a dark blue felt jacket and a disposable face mask as he was told he would not be released until he no longer posed a risk to the public.

Judge Angela Rafferty QC told Brazant: ‘You are totally unpredictable, your hostility towards women is deep-seated and poorly understood by you.

‘There is no prospect you being safely managed in the public for the foreseeable future.

‘Just because you have. Mental illness does not nest relieve you of responsibly of your actions. In your case you have a very long history of non-compliance with mental health services.

‘You are well aware of what the consequences of not taking your medication will be. You were thinking very clearly before, during, and after the attack. You chose her because she was small and vulnerable.

‘You decide to ‘get’ a young, slight mother pushing a pram, you followed her to somewhere dark and inaccessible, selected a knife from you bag, and inflected seven wounds to her neck and face.

‘I also find that, at time, you displayed deep hostility to women which is not explained by your diagnosis of mental illness. You have tendency to target women in the street.

‘I accept that you mental illness played some part in your offending but in my judgement your culpability is high.’ 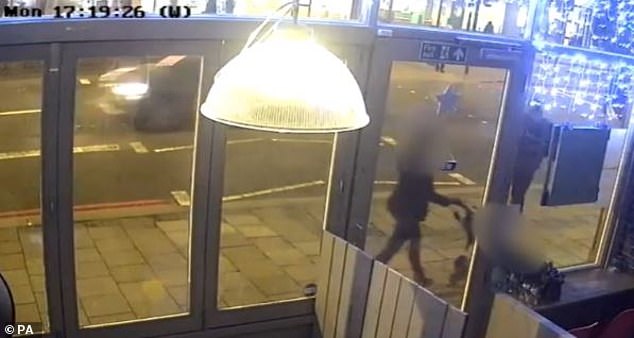 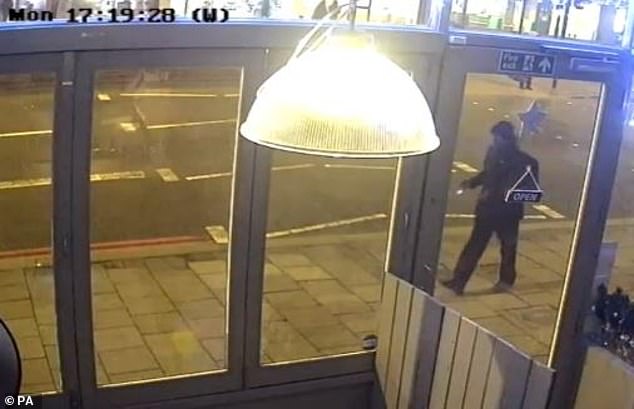 Seconds later, Branzant walks past, stops outside a shop with a cigarette and then walks after Conlon, who he stabbed seven times in the face and neck 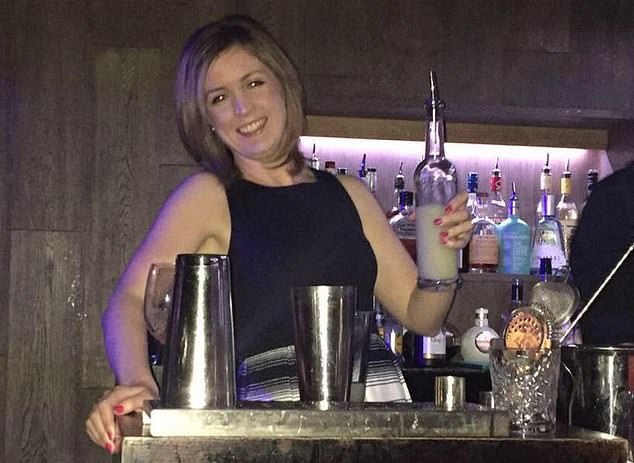 Josephin Conlon, a mother-of-three, earlier told a court she only realised she had been stabbed when she felt blood across her body 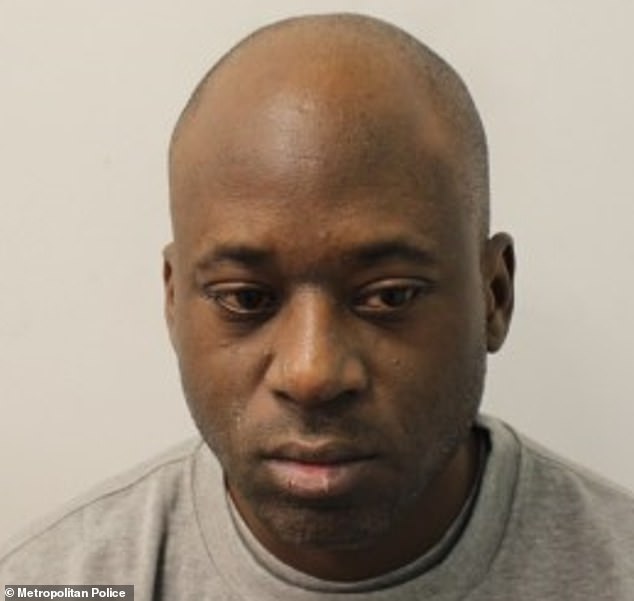 Mark Brazant, 44, ambushed married mother Josephine Conlon, 36, less than a week after being released from prison

She concluded: ‘It is not possible to say when you will no longer be a risk.

‘There are a number of factors relating to your illness and other personality traits which make it uncertain if ever you ill be safe to be released.

‘This does justify a life sentence. No other sentence will provide adequate protection for the public.

Turning to Mrs Conlon, she said: ‘The court commends both of you for the composure and fortitude you have shown throughout this case and proceedings.

‘The court hopes that the effect of the trauma will fade in time and that your family will once again live a full and happy life.

‘Mrs Conlon, your daughter will, it is certain, feel immense pride in the courage and fortitude of her mother who did not die that day but fought bravely.’

Brazant was handed two years each for the three knife possession offences to run at the same time and 22 years for attempted murder but was told he must serve at least 11.

Before his sentencing, defence barrister Oliver Renton described his treatment by the probation service as ‘a potentially catastrophic failure.’

Referring to the comments made by Ben Omullo, a team leader at mental health facility, Enriched Care Limited, he said: ‘The court will recall the evidence of Ben Omullo as to the expectations that he had as to what would happen upon Mr Brazant’s release from prison.

‘He expected Mr Brazant’s care coordinator to assist Mr Brazant in taking a taxi from the prison to the hostel.

‘That, the court may consider, in the case of a man who had gone into prison after a well evidenced descent into mental health crisis, would be the sort of pastoral care tailored to ensure that he had a decent chance of regaining an element of stability in his release from prison.’ 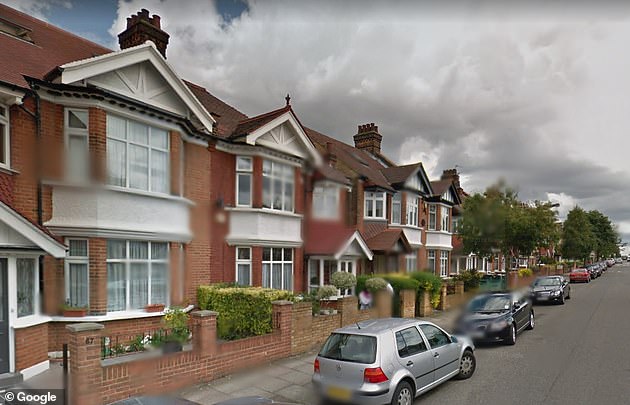 He added: ‘After all, this was a man well known to become paranoid and unreasonable by dint of his illness.

‘A man who would be unusually likely to respond poorly to the difficult transition between institutional prison life and the more free and potentially chaotic existence outside of the walls of the institution.

‘Yet, what in fact happened upon his release? Mr Brazant was left to make his own way back to the hostel. An appointment was booked with probation. To his credit, Mr Brazant did attend that visit.

‘He was sent away. Told that they had no record of the booking. In retrospect, a potentially catastrophic failure to afford Mr Brazant some form of structure and supervision.

‘To have realised that Mr Brazant, someone whose paranoia prior to being imprisoned was increasingly centred around the irrational belief that people at the hostel were trying to harm or kill him, had not returned there, but rather was wandering the streets, sleeping on buses.

‘It was in that sleep deprived, psychotic daze that Mr Brazant decided to take out a knife and attack someone. That he chose Mrs Conlon.’

Mrs Conlon took the stand to tell the court how the attack had changed her life.

She said: ‘I worked really hard to rebuild myself. Following the attack I was immediately stripped of my confidence and feared leaving the house.

‘It took many months before I was able to go out on my own. I’m still unable to leave my house after dark.

‘I’m a very positive and sociable person and I love being busy and hate being shut up at home. Before the attack I use to keep my weekends and evenings full. It took me six months before I could go back to work.

‘The physical wounds have been hard to come to terms with being so visible on my face and neck. They act as a constant reminder every time I look in the mirror.

‘The fact I came so close to losing my life has been hard to come to terms with. I feel I failed my daughter by walking her into such a dangerous situation.

‘It could have been so different, the buggy could have rolled down Streatham Hill and into the road.’

She added: ‘For the defendant to turn around and admit his guilt just a few weeks later shows how selfish and self-centred he is.’

In a separate statement, her husband, Greg, said: ‘Jo will never be able to go out with the same confidence and freedom that she did before. She is always looking over her shoulder.

‘Even I have to be careful where I stand in relation to her. Months after the incident if I were to fall behind her briefly and catch up she would feel shock.

‘This is a part that I don’t think will ever go away.’